'Contracorriente' is the first exhibition of the Spanish curator Emilio Navarro in Die Ecke Contemporary Art which brings together three international artists: Nati Bermejo from Spain, Gabriel Kondratiuk from Argentina and Remy & Veenhuizen from Holland. 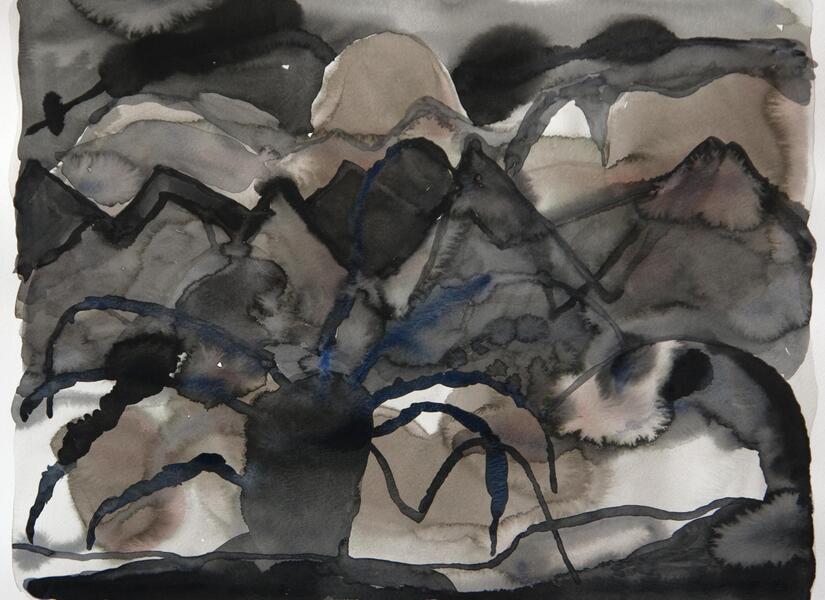 The exhibition is composed of charcoal and gouache drawings by Nati Bermejo, oil paintings with pastel and watercolors by the painter Gabriel Kondratiuk and the series entitled "Euplectella" by the designers Remy & Veenhuizen, made up of luminous objects inspired by the life of the depths of the oceans. The presence in the gallery of some experimental and atypical designers, is the first indicative of the paths through which this exhibition takes place.

The exhibition follows from the interest of highlighting the artisanal or manual realization of the artistic works and focus on all those who still make their pieces intervening one hundred percent on their craft. This defense of this way of creating, say, extemporaneous, is one of the pillars of this exhibition, which aims, among other objectives, to value those works that are made in a very personal and artisanal way and without entrusting anyone with their realization .

On the other hand, 'Contracorriente' brings together three artists whose works rise in response to creative impulses and where the deepest and darkest nature becomes again the the pristine origin of creativity. All the exhibited works have in common the curiosity to find the meaning of life, the incessant search of the origins of existence. And although they are not exempt from a message, thesis or concept, these come to us after that unique, sensory, exciting and carnal moment which is the act of contemplating a work of art. There is something telluric, unconscious and visceral in the production of the three artists.

An exhibition against the current of a time in which we have become accustomed to always having at hand a document where we are told from the beginning what the works we are contemplating are going to be and to be provided with the conceptual arguments that agglutinate the pieces arranged in the exhibition space. Without them, we find ourselves helpless, lost in a sea of ​​images that we do not know how to apprehend or enjoy. We need clues because if not, we will not know what to see or we will be invaded by a stark loneliness that will turn us into spectators of nothing, at most of "something" that leaves us the same as before facing us.

Lives and works in Pontevedra, professor at the University of Vigo, Spain.

The main research areas of Nati Bermejo focus on the contemplation, study and observation of the grandeur of nature and the evident fragility of our existence. More evident even in our days, in the multiple and different conflicts that plague our world. However, she flees from adopting positions of political artist and her works are silent and silent, intense from an emotional point of view, but from a visual or plastic point of view. In fact it uses black backgrounds, the darkest possible, achieved based on graphite and pastel on paper, to put in value certain elements of nature that have a subtle relationship with the unexplained enigmas of our existence and how humanity has gone using them to adapt to their living conditions in each historical moment.

Tejo Remy and René Veenhuizen are two Dutch designers who have been working as a couple since the early nineties. From a long career and with an acknowledged prestige (his works are part, for example, of the MOMA design collection), they have given up from the first moment to let themselves be carried away by the irrepressible whirlwind of serial and industrial production of objects. Their interests are rather based on continually experimenting and giving priority to the materials that their daily context puts at their reach and to which they can temporarily move. The artists develop an artisanal work in which the object designed has as purpose to satisfy the specific needs of an idea or a concept.

Gabriel Kondratiuk (El Bolsón, Argentina, 1969)
Lives and works in Austria.
The landscape of the south of Patagonia where Gabriel Kondratiuk was born left an indelible mark on the most recondite places of his soul. His brain has developed a kind of process consisting of storing and recording images of those territories, which he himself uses when he needs them and which revert on paper, canvas, or the wall. This forms an endless number of shapes, textures, colors and rhythms that place us in front of a kind of pictorial "jam session" for which Gabriel invites the nights, the days, the trees, the flowers, the fruits, the mountains and the rivers to touch with him. A jazz that envelops us and moves us to unthinkable levels. That intimate and telluric bond that unites man with his environment is that which is present in each and every one of the pieces that make up the work of the painter. His paintings, oil, pastel or watercolors are a reflection of his landscape experience of his native territory.
http://www.gabrielkondratiuk.com/

Emilio Navarro (La Coruña, Spain, 1960)
Cultural manager and curator of extensive career, highlighting within it the following activities: In 1987 he founded his own gallery in Madrid dedicated to the dissemination of contemporary artistic trends of his generation, opening a space in Miami (USA) in 1996 that closes definitively in 1997. Between 1999 and 2001, he directs three consecutive editions of the International Art Fair "Tránsito" in Toledo. From 2003 he joined the Caja de Burgos team to start the CAB, Art Center Caja de Burgos. From October 2003 to December 2006, he served as deputy director of the CAB and from January 2007 until November 2015 as director. In this period he healed numerous individual exhibitions of international artists; also in other Spanish and Chilean institutions. Among them, it is worth mentioning "Territories and existences" Magdalena Correa. Foundation Telefónica Room. 2008. Santiago de Chile and "Agenda Santiago" MAC Quinta Normal. November 2012. He has participated as a lecturer and published texts related to artists and contemporary aesthetics along with being a jury in various artistic contests. In 2014 he was named patron of the Arte y Mecenazgo Foundation (Obra Social La Caixa) and currently he teaches a subject in the Master's in art market and photography agents in the Tai School of the Rey Juan Carlos University (Spain).

From January 4th to 27th