The National Thyssen-Bornemisza Museum in Madrid presents Towards an objectual painting, an exposition that establishes a dialogue between the work of the artist of Argentinean artist César Paternosto and a selection of works from the museum's collections. 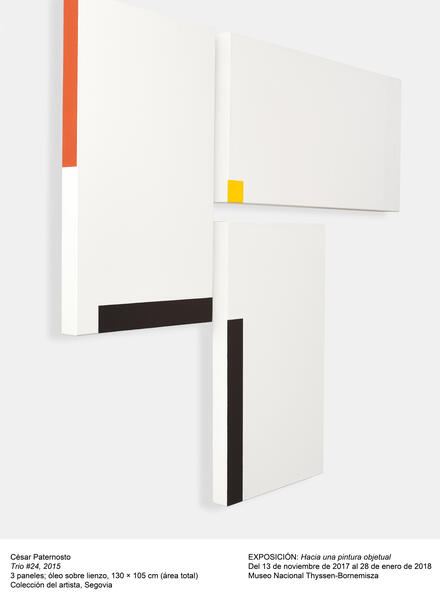 Curated by Paternosto, the exhibition analyzes the change of the pictorial paradigm that led artists of the early 20th century to rediscover painting as an object in opposition to the Renaissance illusion that seeks in the work the mimesis with reality. Followed by this thought the artist selected six works of the museum: New York City, 3 (unfinished), Composition No. XIII / Composition 2 and Composition of colors / Composition No. 1 with red and blue of Mondrian, Man with clarinet by Picasso, Still life of Gray, and Madera planos de color by Torres-García, which he will present alongside eight of his pieces from various public and private collections.

As a special activity, on January 24, 2018, the artistic director of the Museum, Guillermo Solana, and César Paternosto will participate in a conference in the assembly hall, with free access until the capacity of the room is exhausted.

"That the painting is also an object - explains Paternosto -, a thing (a fabric stretched on a frame), is a fact of which full consciousness is assumed only in the twentieth century. (...) In a dialogue - which I hope is fruitful and demonstrative - with the works of the Thyssen-Bornemisza Museum collection that I have been invited to choose, (...) a selection of my works from the 70s testifies to my aspiration to make the painting an object that must be read comprehensively: a front surface (apparently) empty plus the sides provided by frames deeper than usual, where the pictorial theme develops. It is evident that when we speak of a painting as an object we are placed in front of a thing. (...) However, as Adorno warns us, 'the spirit is what makes works of art, things between things, something different from them'. "

César Paternosto (La Plata, Argentina, 1931) is a painter, sculptor and theoretical researcher who lived in New York from 1967 to 2004, and who currently resides in Segovia. He practiced from the first moment the abstraction, initially of expressionist and very soon geometrical type, thus inserting himself in the great avant-garde Latin American tradition. In this context, it evolved towards a "sensitive geometry" in which the coldness would be attenuated by the delicacy of the tones and a subtle irregularity of the lines. In the Western art tradition, the pictorial field had always been organized towards the center of the canvas. In his work of maturity, Piet Mondrian nevertheless imposed the compositional dispersion, eliminating the frame and gently pushing the pictorial elements towards the periphery of the painting. Paternosto, on the other hand, discovered in 1969 the expressive possibilities of canvas singing, which allowed him to transform the painting into an object, inaugurating a new space for painting and forcing the modification of the traditional position of the spectator in front of the work. It was a logical consequence of the precedent initiated by Mondrian that had a surprising result, since his painting is not offered directly to the public, but is concealed so that the viewer looks for it in an oblique enclosure. But Paternosto goes even further than that objectuality of painting: his pieces are self-conscious objects and have the virtue of presenting themselves, even without the help of their creator, explaining what kind of objects they are, where they come from and with what works of other artists dialogue.

Towards an objectual painting