Coral Gables City Hall, Raúl Valdés-Fauli, Mayor of Coral Gables, and curator Ninoska Huerta presented a public art installation at City Hall and surrounding areas by Venezuelan Kinetic Master Carlos Cruz-Diez. Comprised of a chromatic environment specifically designed for the city, the installation will be on view until January 20, 2018. 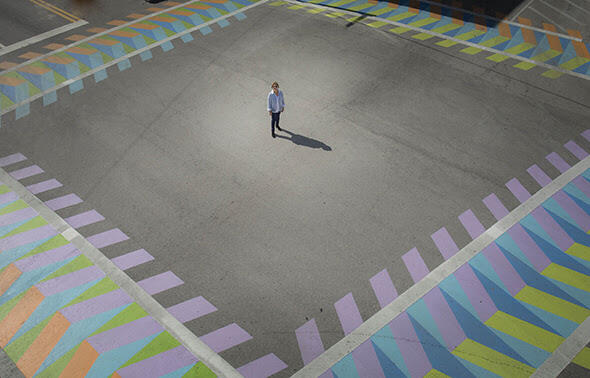 Thirteen brightly colored, oversized banners designed by Master Cruz-Diez and commissioned by the City of Coral Gables will adorn the columns of the historic City Hall building and complement the multicolored geometric crosswalks linking City Hall with the Coral Gables Museum.

World-renowned for his ephemeral public works of art that create chromatic interventions and in this case, Cruz-Diez’s pedestrian walkways will guide the public through the streets of the city creating a link between the City Hall building and the Coral Gables Museum. This project includes the installation of thirteen colorful triangular banners that adorn the historical City Hall building’s facade, followed by eight different pedestrian crosswalks that create a modern art path from the front of the building toward the Coral Gables Museum, crossings important streets like Biltmore Way, Coral Way, Le Jeune Road-Aragon Avenue and Salzedo Street. This public art project is included in Art Basel Miami Beach 2017 program.

In addition, the vibrantly painted pedestrian walkways have been placed in Coral Gables to offer the experience of color in the city to each passerby through his chromatic inductions. In parallel, the Museum will be showcasing photographs of master Cruz-Diez long history of pedestrian crosswalks all over the world, including the entrance to the Marlin’s Stadium in Miami, and more recently, the one at The Broad Museum in Los Angeles.

Carlos Cruz-Diez (Caracas, 1923) is one of the most important Latin American living masters. He has traveled extensively around the globe showcasing his works in major museums and exhibitions, devoting his entire professional life and practice to reflecting on the concept of color and our eye´s perception of color, thereby becoming one of the most prominent and representative figures in the Kinetic Art movement.

In the early fifties after having trained as a painter, Cruz-Diez began studying Goethe’s color schemes. However, instead of focusing on a single new theory of color, he devoted himself to understanding the behavior of color and light in art, and its relation to how it is perceived by the human eye and the brain, reflecting on the true nature of color.  He is recognized globally for his studies in color and what he named Physiochromies, Chromo-interferences and Chromo-additions, Chromatic inductions, and Chromosaturations, all different structures that reveal color’s relationship and conditioning to the environment, based on the movement of the eye, light, and the viewer; creating an illusion of movement and an evolving process in which color appears as a reflective element that is simultaneously additive and subtractive, constantly tricking the eye and creating new color schemes in the process.