CUBAN UTOPISM, THE PICKINGS OF ANOTHER IMAGINED HORIZON

Under the organization of the essayist and art critic Iván de la Nuez (Havana, Cuba, 1964), La Virreina Centro de la Imagen (Barcelona, ​​Spain) exhibits La utopía paralela (Parallel Utopia). Through the collection of illustrations and plans of imagined cities, the exhibition proposes to discover the projection that the so-called Cuban Eighty Generation thought for its future. Children of those who staged the Cuban Revolution, the perspective adopted by the new generation, above all within architecture, had conceived a multicultural, socialist and Western landscape in a global context that announced the decline of communist projects in Eastern Europe and a vertiginous hypercapitalism. 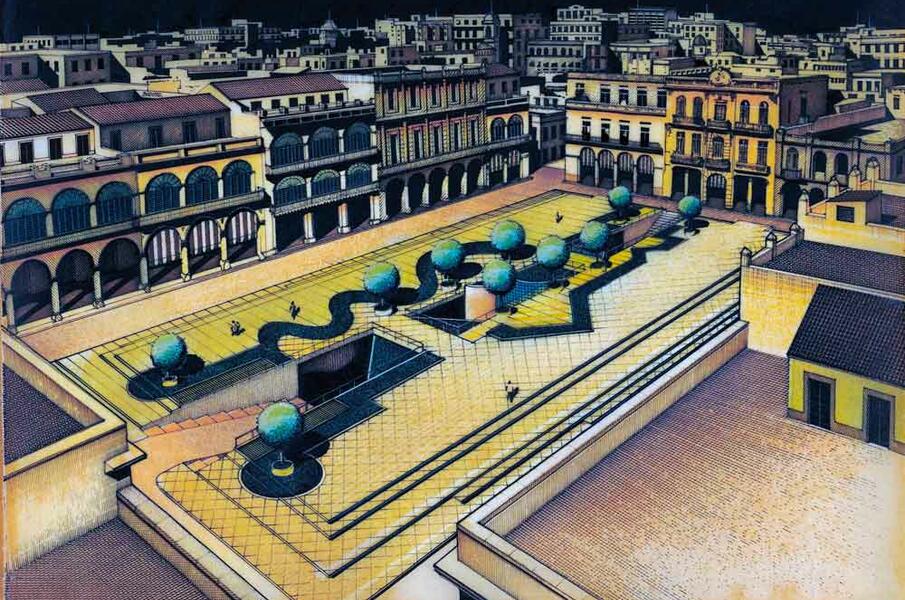 The projects exhibited at La Virreina found their theoretical apogee between the 80s and 90s. Going beyond the borders of architecture and urbanization, this "prodigious decade", as defined by Gerardo Mosquera, sowed a heterodox seed against traditional left winged ideals. Thus, in the Cuban youth, it was born a kind of glasnost conceived by and for those who had been trained under socialist education and art. All this, such as explained from La Vierreina center, was product "of the expansion of the cultural commission to other fields of society; of the evidence of misinformation in the official press; from an anthropological side that drank from povera art and based in Artaud, Grotowski, the first Eco or Beuys." And the transitions were many: "From the emergence of avant-garde manifestos; of the evocation of the non-institutionalized years of the Revolution; of the flowering of performance; of the search for an alternative community to massification; of multidisciplinary deployments; from openness to pagan forms of culture, particularly Afro-Cuban religions; of the creation of an imaginary city by some architects with little chance of building the real city; of the aforementioned reinsertion of Cuban culture in the West; of the connection with the Eastern European underground; of the putting in solfa of the national symbols and heroes; of the use of irony and play; of sexual prejudice; of a criticism opposed to Marxism packed with manuals ... ".

Thus, La utopia paralela, in its silent manifestation, emerged as an idealized third way that sought to absorb the development of the global capitalist system within a progressive framework and socialist cut absolutely sui generis. And that was not limited to urban projections: at the center of the artistic scene, the "sons of Guillermo Tell" -as Carlos Varela called them-took culture and thinking adapting it in a protean way to the future that was emerging beyond the Caribbean Sea. A perspective modeled by the practical and rhetorical modes of the political and social world.

The exhibition in the city of Barcelona is, in short, a great test against political intolerance. An artistic, social and economic worldview oriented to the new world that, from the partial depolarization of the geopolitical scenario, and the subsequent assumption of Gorbachev in the Soviet Union, imagined a cosmopolitanism that oscillated between consumer societies and the legacy of the left wing ideals.