The 16th edition of Art Basel in Miami Beach will feature 268 outstanding galleries in an entirely new exhibition and distribution architecture. 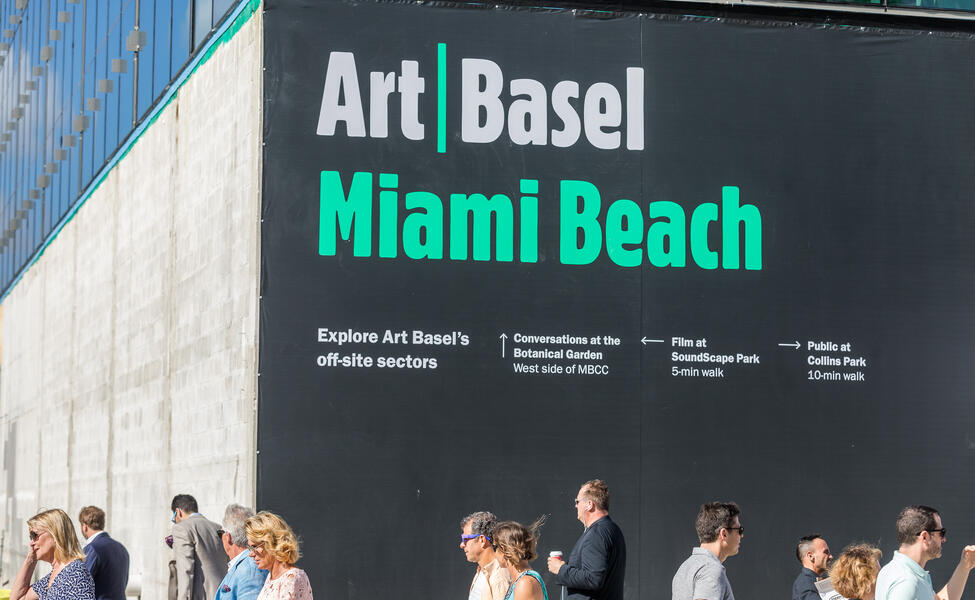 Coming from 32 countries in North and South America, Europe, Asia, the Middle East and Africa, the exhibitors will present artistic creations ranging from modern masterpieces and historical projects to new works by established and emerging artists. This year's exhibit will feature a new exhibition layout and layout, reflecting the improved possibilities provided by the ongoing renovation of the Miami Beach Convention Center (MBCC). 2017 is an important year for the cultural scene in Miami due to the reopening of The Bass after a large-scale renovation and the inauguration of the new Institute of Contemporary Art building, Miami (ICA Miami) in the center of the Miami Design District. Art Basel, whose Principal Partner is UBS, is held from December 7 to 10, 2017 at the Miami Beach Convention Center. The MBCC, headquarters of Art Basel since its first edition in Miami Beach in 2002, is now in the second phase of a major renovation, which began at the end of 2015. With a completion scheduled for 2018, the construction will lead to pavilions of modernized exhibitions that offer avant-garde facilities for exhibitors and visitors. As a result of the ongoing renovation, the 2017 exhibition will have an exhibition format completely redesigned by Tom Postma Design.

This improved design of the exhibition consists of a new distribution of plant that incorporates more than 10% of additional exhibition space, giving rise to larger stands, wider aisles and improved options for resting and eating.

Currently in its 16th edition, Art Basel in Miami Beach is the main art exhibition in America where more than half of the participating galleries have exhibition spaces in the region. Along with a solid list of returning galleries, the 2017 edition of the exhibition presents 20 galleries that are participating in the exhibition in Miami Beach for the first time. The exhibition welcomes nine participants present for the first time and from North and South America, including Anat Ebgi from Los Angeles; Chapter NY, David Lewis Gallery and Tyler Rollins Fine Art from New York; Inman Gallery from Houston; Patron from Chicago; Galeria Jaqueline Martins and Ricardo Camargo Gallery from São Paulo; and Floating Island from Buenos Aires.

In addition, the 11 new exhibitors from Europe and Asia are: A Invernizzi art from Milan; Applicat-Prazan and Ceysson & Bénétière from Paris; Dépendance from Brussels; Múrias Centeno with spaces in Oporto and Lisbon; Hales Gallery, Offer Waterman and Richard Saltoun Gallery from London; Antenna Space from Shanghai; and Takuro Someya Contemporary Art and Taro Nasu from Tokyo.

The Galleries section will feature outstanding exhibitions of paintings, sculptures, drawings, installations, photographs and videos, presented by 198 of the world's leading galleries. This year, to a solid list of returning participants, there are 10 galleries that have previously participated in the Nova, Positions or Survey sections of the exhibition: 47 Canal, Bureau, Garth Greenan Gallery, Kalfayan Galleries, Leme Gallery, Peres Projects, Plan B Gallery, Sfeir-Semler Gallery, Jessica Silverman Gallery and Tokyo Gallery + BTAP. A gallery, Applicat-Prazan, will be completely new in the exhibition, while Konrad Fischer Galerie and Fergus McCaffrey, after a pause, will return to the Galleries section in Miami Beach. For the full list of Galleries galleries, visit artbasel.com/miamibeach/galleries.

Positions allows curators, critics, collectors and visitors to discover new talent from around the world by offering a platform for galleries to present an important project by a single artist. This year, the section will have 14 individual stands. In Antenna Space, Xu Qu (born in 1978) will show a new series of ceramic pottery sculptures and typographic prints that examine how religious activities have influenced Chinese society. There will also be ceramics on display at a Carl Mannov installation (born in 1990) at Christian Andersen. Arredondo \ Arozarena will present a daily performance by Israel Martínez (born in 1979). Adam Gordon (born in 1986) will transform the stand of Chapter NY into a performance facility: a document that vaguely describes the performance will encourage visitors to identify an anonymous woman who wanders around the fair near the stand throughout the exhibition. Jibade-Khalil Huffman (born in 1981) will present a new artistic corpus in Anat Ebgi that focuses on the figure of the black male in the history of art, cinema and literature, while Jamal Cyrus (born in 1973) will explore the cultural policy of American black music and the civil rights movement of the 1960s and 1970s at Inman Gallery. Jill Mulleady (born in 1980) will treat the stand of Freedman Fitzpatrick as a stage for a social drama represented through a set of six new paintings that create a staging. In addition, Patron will present sculptures, wall constructions and a large mural by Harold Mendez (born in 1977) and the Galeria Marilia Razuk stand will be an extension of Rodrigo Bueno's studio (born in 1967). Dan Herschlein (born in 1989) will present a group of sculptures that together create a disturbing domestic interior in JTT, while Nicolas Ceccaldi (born in 1983) will take advantage of his interest in analyzing religion as a contemporary social phenomenon through new paintings and brochures to distribute at Real Fine Arts. Among the highlights of the section are also a pendant of monochromatic paintings as a collage by Mariela Scafati (born in 1973) on Floating Island; a configuration of new works that alter the boundary between the domestic and natural worlds of A.K. Burns (born 1975) at Callicoon Fine Arts; and figurative paintings by Koichi Enomoto (born 1977) in Taro Nasu.

Nova provides the galleries with a platform to present new works by up to three artists and will have 29 exhibitors this year. Among the first-time exhibitors are: Dépendance, with drawings, sculpture, painting and film by Ed Atkins (born in 1982), Gillian Carnegie (born in 1971) and Peter Wächtler (born in 1979); David Lewis Gallery that presents works by Dawn Kasper (born in 1977) and Lucy Dodd (born in 1981); and Tyler Rollins Fine Art will assemble an installation never seen before of Manuel Ocampo (born in 1965) who reflects on current global political events. There will be a series of presentations that address various political and social issues. Prometeogallery di Ida Pisani will present the work of Santiago Sierra (born in 1966), Regina José Galindo (born in 1974) and Hiwa K (born in 1975), who explore the notions of communities and their transformative power. David Castillo Gallery will present works that raise urgent questions about representations of race, sexuality and gender in today's society, including a live performance by Kalup Linzy (born 1977), as well as photographs by Lyle Ashton Harris (born in 1965) and Xaviera Simmons (born in 1974). In Tanya Leighton, Sanya Kantarovsky (born in 1982) will show a new artistic corpus that juxtaposes the festive atmosphere of an art fair with the growing erosion of civil rights throughout the world, while Rosângela Rennó (born in 1962) and Teresa Margolles (born in 1963) will present a project on memory and violence in Mor Charpentier. At the stand of Proyectos Monclova, Tercerunquinto (established in 1996) will mount a performative work, painting murals of Mexican political campaigns directly on the walls. This performance will be accompanied by a new video that will create a visual and conceptual link between campaign mural painting and Mexican Muralism as an artistic expression of modernism.

Other highlights will be: Dara Friedman (born in 1968) in Supportico Lopez, whose exhibition at Art Basel in Miami Beach will coincide with the retrospective of the artist at Pérez Art Museum Miami (PAMM); Alexandre Estrela (born 1971) in Crossing Four, Barry McGee (born 1966) in Ratio 3, Torey Thornton (born 1990) in Essex Street, Carolina Caycedo (born in 1978) in Vision Institute; Sascha Braunig (born in 1983) and Sara Cwynar (born in 1985) in Foxy Production, Alex Hubbard (born in 1975) and Emily Sundblad (born in 1977) in House of Gaga and Ishmael Randall Weeks (born in 1976) and Andrea Galvani (born in 1973) in Revolver Gallery. For the full list of Nova galleries, visit artbasel.com/miami-beach/nova.

Founded in 1970 by Basel gallery owners, Art Basel currently organizes the world's leading art exhibitions for modern and contemporary art, located in Basel, Miami Beach and Hong Kong. Defined by the region and host city, each exhibition is unique, which is reflected in the participating galleries, the works of art presented and the content of the parallel programming produced in collaboration with local institutions for each edition.

Art Basel's commitment has expanded beyond art fairs through a series of new initiatives. In 2014, Art Basel launched its Crowdfunding Initiative, in collaboration with Kickstarter. This initiative presents art projects selected by a jury to possible benefactors, which include the vibrant public of Art Basel and the Kickstarter community. The initiative has catalyzed the support both non-commercial art projects need around the world and so far has helped to commit more than $ 1.8 million in creative projects around the world. For Art Basel Cities, launched in 2016, Art Basel is working with select partner cities to develop vibrant and content-specific programs for each city. Connecting them with the global artistic world through the experience and networks of Art Basel, Art Basel Cities supports its partners to develop its unique cultural panorama. For additional information, visit artbasel.com.

Opening days to the public: