Since Thursday January 28 is open the exhibition The Way Things Go  and the Project Room Black Tools, the first solo exhibition in the gallery by the Madrid-based, Chilean artist Patrick Hamilton. 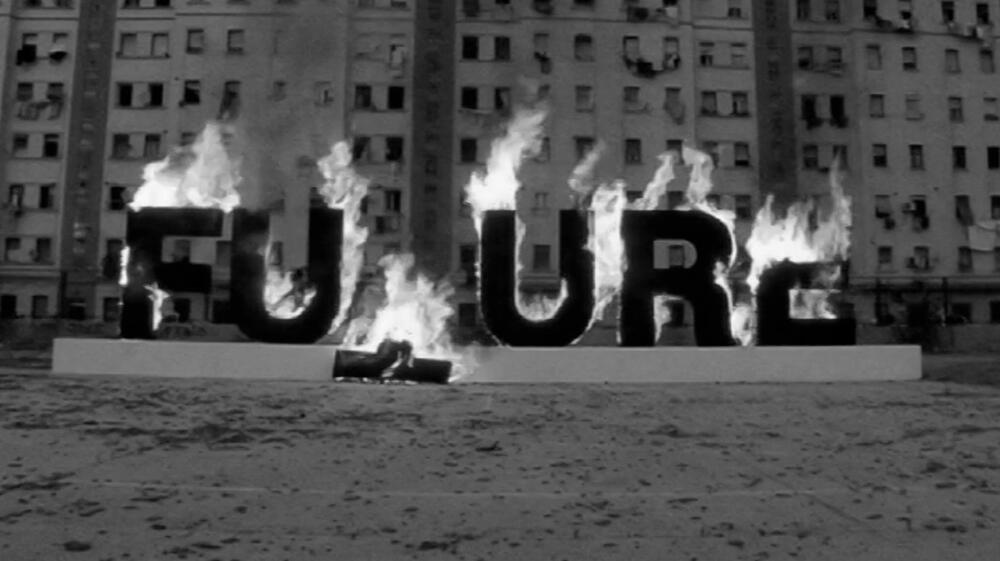 Since Thursday January 28 is open the exhibition The Way Things Go, wich pays homage to the video of the same name, a masterpiece of Swiss artists Peter Fischli and David Weiss; and the Project Room Black Tools, the first solo exhibition in the gallery by the Madrid-based, Chilean artist Patrick Hamilton.

The exhibition The Way Things Go (So are things) pays homage to the video of the same name, a masterpiece of Swiss artists Peter Fischli (1952) and David Weiss (1946-2012). Since its premiere in 1987, the video has done nothing but gather praise under the explosive combination of conceptual rigor, irony, and absurd elements that otherwise characterize their entire oeuvre in sculpture, photography, and installation.

The video documents a chain reaction performed with various everyday objects such as chairs, ladders, tires, balloons, firecrackers, tables, etc., which develops in a continuum for 30 minutes by the use of gravity, water, and fire to cause all kinds of physical phenomena, motion paths, precarious balance, and various effects, including some chemical reactions.

The 9.99 Gallery present "Black Tools," the first solo exhibition in the gallery by the Madrid-based, Chilean artist Patrick Hamilton.

True to the conceptual nature of his work, Hamilton refers to the political history of his country through a series of collages and sculptures, which he has produced in the last year, and which broadens and deepens his aesthetic reflections on major issues affecting contemporary societies, particularly those that refer to labor and social inequality in Chile in recent years.

These reflections analyze the consequences of the "neoliberal revolution" (Thomas Moulian) implemented in Chile by Pinochet — and the "Chicago School" — during the eighties and its projection in the social and cultural milieu in a post-dictatorship Chile; they result in works that can be read from the notion of "social forms" (Christian Viveros-Fauné), thanks to their economy of expressive resources and their deep bond with the analysis of social, political, and economic phenomena. Hamilton’s production could be described as realist art in relation to the exaltation of the physical qualities of his works, as well as a consideration of the concrete phenomena of our social reality. Through the manipulation of tools used for manual labor, the artist creates objects that represent and act as metaphors in the increasingly precarious world labor economy. The formal character of the work is provided by another of Hamilton’s great source of inspiration: the History of Art. So, is the work of the constructivists, concrete art, and Suprematism — in this case Kasimir Malevich’s emblematic black square — which serves as a link between the economy of gestures and means, the use of monochrome and the formal rigor with spatulas, pikes, and sandpaper, which leave behind their functionality and remain at the mercy of anyone who wants to contemplate them.    The placement of the works in the space resembles a shadow theater, with pieces that disguise their materiality and communication function, a contradiction between the visible and invisible, transparent and opaque, opposites that in contemporary societies contribute to the concealment of problems of unemployment, shadow economies, and illegal work that become a precarious solution to the lives of millions of individuals.

Patrick Hamilton (1974, Leuven, Belgium). Lives and works in Madrid. He graduated in Arts from the University of Chile. In 2007 he received a Guggenheim Fellowship, awarded by the John Simon Guggenheim Memorial Foundation, New York. In 2006 he completed a residency at the International Studio & Curatorial Program (ISCP) in New York.