"SPACE BETWEEN WORLDS": THINKING IN AN UNCLASSIFIABLE MANNER

It seems that any postulation of thought has to be categorised, or at least it has been academically cathegorize. But what happens when you are in-between and your ideas are on the fringes of definitions? Artist María Fernanda Carlos' exhibition, Espacio Entre Mundos (Space Between Worlds), explores the state of being-in-middle, between two parameters, where identity barriers dissolve. It is an exhibition that changes continuously, as the pieces are replaced by new ones from time to time; and it aims to cross borders. To do so, it will be travelling to various countries and cultures: to talk about what lies between life and death and everything in between, thus containing an unclassifiable thought.

The exhibition at the La Galería Rebelde was conceived and realised during the pandemic, which is why María Fernanda Carlos relates this state of time to one of suspension, just like the card of the "hanging man" from the Tarot (cards used by Aby Warburg in Atlas Mnemosyne). The card discusses that in order to take the next step, and for the greater good, you must put everything on hold. The artist describes this pandemic state "between what was and what will be," calling it that "grey space." Making a common thread, María Fernanda Carlos reveals to the audience a relationship of ideas of what it means to be in that space between worlds in which we can find ourselves. 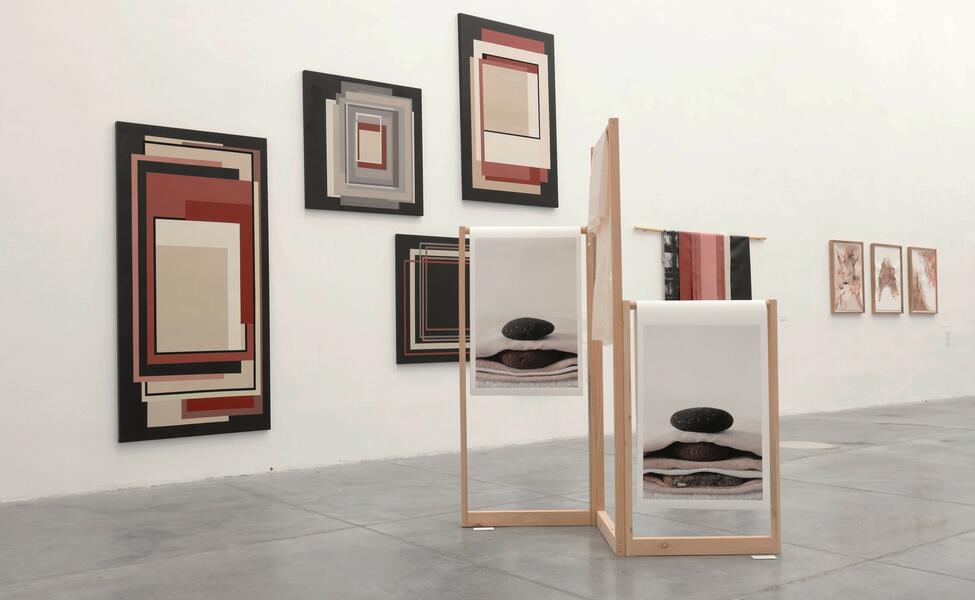 Isabela Mendoza-Lamuño: Could you tell us about the concept behind Espacio Entre Mundos? How did the idea of an exhibition that is changing originate?

María Fernanda Carlos: Space Between Worlds is a reflection, laboratory and study about the different ways in which as human beings we can find ourselves in the environment, be it in experiences, ideas, emotions, territories or identities. That abstract space that we constantly visit but of which we speak little. This exhibition is a changing, mutant project, which does not seek to be defined, only to be recognised.

The research was born out of a need to locate myself and to question where people who have lived or are living similar experiences to mine are located in terms of the notions of territory, identity and race, and  in terms of ideas and emotions.

The idea of making a changing, a mutant exhibition, comes from following a little bit the condition we are living in the pandemic. We seem to be in a kind of pause, a pause that has felt eternal, although we are not really in pause. What is happening is that we are moving out of what was and into something we do not know yet. We are in a transition, living a great instability, and this one caught my attention enormously because many of us are running away from it.

I wanted to make a living proposal, to challenge myself. Although everything feels stopped, inside the space everything is in constant change, it is a laboratory in movement in search of new questions. The artwork dies in a museum when no one sees it, or when it is in a warehouse. In the same way, in the art world, galleries have been quite affected in terms of traffic because people don't want to leave their house; in this case, the intention of the exhibition was to keep the energy of the space alive. Some pieces leave, others fall apart, others are transformed, new ones enter; it's a museography that leaves the comfort of the artist or the gallery.

At the same time, I was (I still am) going through the postpartum period; a very strong stage for any woman in which personal life is put on hold while the world goes on at great speed. In this case, it was to do the opposite.

IM-L: In the exhibition you share this fragment by Gloria Anzaldúa: "Nepantla is unknown land, and to live in this communicating zone means to be in a constant state of displacement, an uncomfortable, even alarming sensation". Gloria Anzaldúa talks about the pain of finding yourself as Queer, Chicana between territories. Could you explain your experience of being in the middle? What does that produce for you?

MFC: I was born in Mexico City, but I have lived in Guatemala most of my life. I spent the first years of my childhood crossing the border in a bus and I think that's why I've identified with the word displaced/displacement, which I haven't found yet an equivalent in Spanish to describe the sensation. Questions about how people who were born on the border see themselves and how their sense of identity functions have been some of my questions, the idea of not being from here or there, as well as life experiences in which the sensation can be very similar.

Something that is also important is the space that Gloria Anzaldúa gives to the hybridization. We live in a society that seeks to label us. However, we are complex, we are hybrid creatures. We are neither this nor that, and any label for us is an aggression to that option of transit, of change, of dying and being reborning.

IM-L: Can you tell the story behind Mutant oeuvre?

MFC: In the process of observing different ways of being-in-the-middle, I realised that working on healing is a constant state of being in constant change, mutating. You can't heal if you haven't healed yourself, so in certain therapies or tools we are asked to be in constant inner work. For me that is equivalent to dying and being reborn. While I was working on the portal series, I came across an article that talked about eagles and how, when they turn 40, their beaks rot. They then have to decide whether to let themselves die or to break their beaks on a rock, thus becoming completely vulnerable. Those that choose the second option hide in caves to go through a transformation process in which they cannot eat until beak regeneration is complete. It is a conscious preparation for death and rebirth. I was struck by the wisdom in nature. We, on the other hand, resist transformation, change and letting go of something. From the age of 40 onwards, human beings change very little and become more and more comfortable with an idea of themselves. The pandemic came to shake this condition, forcing us to let go of whatever we believed about ourselves. Most of us were forced to break our beaks.

Mutant is a piece made of several canvases painted in acrylic. The layers must be continually changed by the gallery, the museum or the collector. It's about letting go of the artist's aesthetic proposal, allowing them their own version, a gesture that allows us to explore new possibilities.

IM-L: In the exhibition you wrote dreamlike, meditative texts with the figures of your loved ones. What was the artistic process in this exhibition? How do you want the artworks to be experienced?

MFC: I don't know how I want the works to be experienced, it's very personal and subjective. What I do know is that my personal experiences are only a starting point, an opening to dialogue and self-observation. I expose personal experiences because I feel it is honest, but it is not to see the 'case of María Fernanda’, but rather, given that the situation of being-in-the-middle is spoken about by few and visited by many, to open portals of reflection.

IM-L: Life can be an enunciation, or a testimony that praises the act of creation. For example, when a person releases a mist in front of a glass and the glass becomes stained, it becomes an expressive gesture of life itself. In the painting Creation I it manifests itself as a catharsis of expanding gestural expression. What do you think about this?

MFC: I'm very interested in the subject of creation. Maybe it's because I'm postpartum, but the fact of being able to give life to something (someone) is a very crazy act that requires a lot of responsibility. Maybe it's a catharsis because the process of having a baby is very strong, and very little is said about it in art.

There are pieces that are very intuitive, there are others that are a necessity and others that are of an investigative nature. For me, the richest thing about this exhibition has been to assume it as a laboratory that continues to discover, mutate and transform itself. In fact, I'm still working on new pieces.

MFC: Yes, all thought is localised. This means that, at the same time, there are these hybrid spaces/territories.

And yes, I mean it in a metaphorical way because I talk about that space-in-between in many different ways.

IM-L: In the exhibition you showed yourself to be between the death of your father and the birth of your daughter. In a world where joy, birth, sadness, love and death are intertwined, what do you consider to be your father's legacy and what is the legacy you would like to give to your daughter?

MFC: I think the most important thing he left me is the love for my children and making them part of our artistic practice. I grew up with him in the studio; since the age of 3 he took the time to teach me with seriousness and dedication, he talked to me about the importance of discipline and continuing to do regardless of the results. He was also a great example in following his heart: he, against all odds, decided to dedicate himself to art even though my grandfather was a farmer and did not support him in his decisions. These things I would like to pass on to my daughter.

IM-L: The body is a constant in the exhibition, but also the spirit, or energy. Some of your paintings become performative, how does spirituality fit into your artwork?

MFC: Yes it can be very performative because every time I make a piece on canvas it is a ritual; the action, the gesture, the state of mind is the most important thing for me. The result is secondary.

IM-L: Hannah Arendt wrote: "Seen from the perspective of man, who lives always in the interval between the past and the future, time is not a continuum, a flow of uninterrupted succession; it is broken in the middle, at the point where "he" stands; and his point of view is not the present as he usually understands it, but rather a gap in time which his "constant struggle", his "resistance to the past and to the future, keeps in existence"[1]. How do you see your relationship to the past and the future?

MFC: I see many people attached to the past, clinging to something that is past and will never return. I see fear of the future and uncertainty. In adolescents I get the impression that this is not so much the case, but in adults this dissatisfaction with the past and the future is very common. Maybe yes, time is not continuous, but the pause is still time, isn't it? The long wait, that grey space between what was and what is to come.

[1] Arendt , Hannah. Between Past and Future.