Showcasing single-channel works by established and emerging artists, the videos in the exhibition illustrate a simultaneous ongoing attempt to build some sense of the present and the future. Unresolved Circumstances: Video Art from Latin America, co-curated by Cecilia Fajardo-Hill and Idurre Alonso from MOLAA, explores past and present recurring issues in Latin America that continuously shape a contradictory reality. Presented in three thematic axes—Culture, Politics and Location—the works in the exhibition deal with several global and local socio-political issues and forms of poesies and irony related to reality and its contradictions. 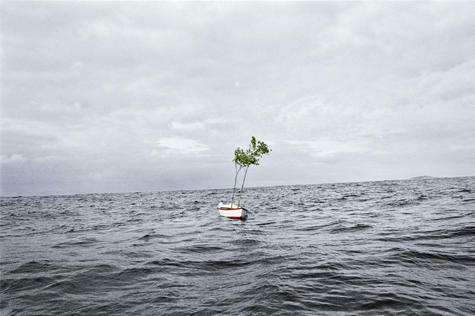 The exhibition begins by presenting an open dialogue that relates to Latin American cultural realities, addressing subjects such as the construction of culture and the ironic deconstruction of given artistic and historical iconography. This section includes the work Culture (1999) by Lucas Bambozzi in which the viewer is presented with different perspectives of what culture is and Ivan Candeo’s Miranda en la Carraca (2007) in which the artist criticizes institutional structures by destroying an emblematic work of art.

The second part of the exhibition is dedicated to video works that deal with political issues including colonialism and its effects; the contradictions of a dysfunctional modernity and its consequences, and the establishment of repressive political regimes and their effects. While artists such as Jeannette Chavez ( Self-Censorship, 2006) and Tania Bruguera ( Tatlin Whisper # 6 (Havana Version), 2009) address censorship in their works, Alexander Apostol ( Yamaikater, 2009) refers to social inclusion and the empty discourse of Latin American politics. Included in this part of the exhibition is a significant sub-section on gender issues featuring works by four women artists: Eugenia Calvo, Priscilla Monge, Amalia Caputo and Teresa Serrano. In their work these artists explore themes related to domesticity questioning at the same time traditional gender roles.

The theme of Location primarily concerns poetic and free associations with the landscape. The works of Regina Galindo ( Alarm, 2011) and Adriana Bustos ( Spring, 2004) address issues in the urban landscape including violence and social inequalities. Artists Cao Guimaraes ( Nanofonia, 2003) and Thiago Rocha Pitta ( Heritage, 2007) approach the subject of landscape in their videos with playfulness and a sense of aesthetic beauty.

By presenting an array of videos utilizing a variety of aesthetic approaches to different issues pertinent to Latin America, Unresolved Circumstances illustrates the interconnections between the past and the present, local and universal issues and the intimate and the public, through persistent themes.