The exhibition Vista at the University of Maryland University College, UMUC, explores different notions of “cultural landscapes” as distinct geographical areas representing the combined work of nature and of human kind. 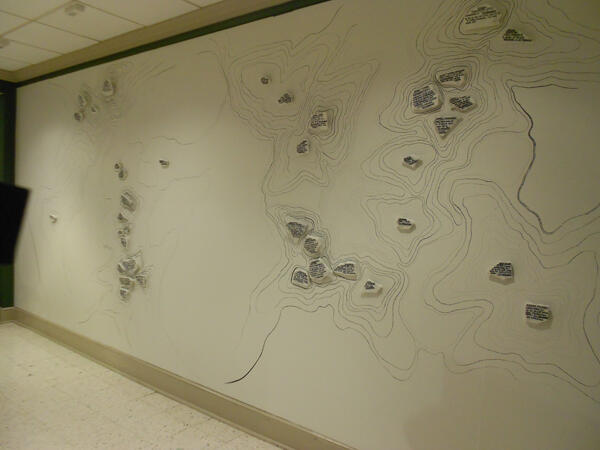 Works presenting plans, maps and diagrams in space created by artists from Latin America living in the US, and whom address and deconstruct this notion.

The title of the show, “Vista,” or “view,” is probably an attempt at finding a word that brings together the broad outlines of the theme set by New York-based curators Jodie Dinapoli and Eva Mendoza Chandas. The two were specifically invited by UMUC to give direction and cohesiveness to a group exhibit focused on a notional interpretation of maps and cartography, including references to space, time, place, exploration, immigration, identity and memory. With such an expansive theme, and such a large number of well-respected artists working in an array of distinct styles and approaches, the result is a lively range of work, all of it high quality.

Zabala began making maps of Argentina and South America in the 1970’s. His “Seis Imágenes del Fragmento 30 (Argentina)” (Six Images of Fragment 30 [Argentina]) (1973) is based on a text by the ancient Greek philosopher Heraclitus. Heraclitus believed that the uncreated universe is eternal, like a fire that expands and contracts and then expands again. Zabala translates this, and references the history of presence and absence in the continent, by burning a progressively larger hole in five maps of South America. The sixth is whole again, implying another cycle.

Venezuelan artist Carola Bravo approaches the subject of maps from two points of view: an installation connecting the seismic centers of the world, many of which are in Latin America, and a video of maps as memory.

“Epicenters: Shaking Our World” is a disturbingly intriguing map of proportionally sized interconnected circles labeled with the place names, dates and measure of their worst earthquakes. Universalizing these tragic events, they promote specific memories of their devastation. Her video “Memory Maps” features a hand drawing lines over lines corresponding to plans of her hometown. Projected onto a real sketch book, it looks as though the drawings were being made right in front of us, from memory.

Mexican astronomer and art historian Vargas-Suarez Universal is interested in the intersections of art and science, specifically the visual possibilities of various kinds of data. His “Cosmodrome Vectors” is based on a formal rendering of spacewalks, while his elegant “Virus Americanus V,” tightly painted in oil, enamel and ink on canvas, appears to track the movements of sailing ships.

Tamara Kostianovsky was born in Jerusalem in 1974 and raised in Buenos Aires, Argentina. Like Kuitca, she represents the presence of Jewish culture in Latin America through relatively recent immigration. An artist also interested in the architecture of the past and of building aesthetic bridges between places, her “Map of Truth” (2008) documents the idea of the movements of her people by stitching her own clothes together into a shape resembling a bearskin rug, with long lines intersecting across it like a map. This is a powerful piece that connotes the truth that cultures are annihilated through immigration, and makes it personal.

Peruvian José Ruiz makes a similar statement in his edition of prints on black floor mats inscribed with the word DIASPORA. The mat is placed in the middle of the floor, and is continually walked over, so the mat is getting more and more dirty and worn. “This is what happens to a people in diaspora”, the artist is saying us.

The work of Elena Patiño speaks to the subject of people moving across the globe on a brighter note. Her “Color Migration” is made of hundreds of hand-felted wooden balls pinned to the wall on metal stems. In brilliant colors, the balls congregate in the middle in a shape vaguely resembling the United States. Lines of these converge there from the north and the south. Patiño makes the colors of the balls coming from the north hot reds and other strong colors, while those from the south are cool. The Peruvian artist is here reminding the North American viewer that much of South America is cold in winter, with snow and ice in many places, reversing still standing stereotypes and expectations.

The risks of globalization and the downside of unified currencies is the theme of Ecuadoran artist Nicky Enright. In a very tongue-in-cheek installation titled “The Globo,” she presents a globalized currency,
the globo”, in a suitcase of printed money. Two prints featuring maps of the world on obverse and reverse of one globo bill flank the suitcase. Begun in 2008 it seems prescient about the present euro crisis and the miseries that it has brought to so many.