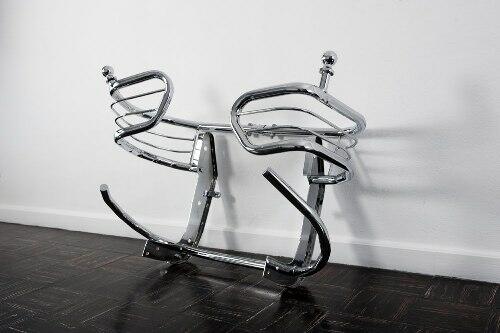 Escobar is widely considered Central America’s leading contemporary artist, known for reinventing everyday objects and sports paraphernalia into compelling sculptures that are layered with history and playfulness. Broken Circle is a site-specific wall installation composed of 1,000 red bicycle reflectors, activated by the interplay of light and the visitors’ movements through the gallery. The exhibition has been curated by Alma Ruiz, Senior Curator at The Museum of Contemporary Art (MOCA) in Los Angeles.

Escobar (1971–) was educated as an architect and art conservator in Guatemala and Spain before exchanging his training for a career in visual art. His groundbreaking early work included gilded consumer objects, such as a McDonald’s paper cup, and silver repoussé sports equipment including skateboards. This conflation of industrial objects with religious imagery using colonial silver techniques formed his initial visual investigations into the impact of middle-class consumerism, material culture, and mass production on Guatemalan society.

In recent years, Escobar’s work has shifted into larger-scale installations composed from the accumulation and repetition of sports objects, including bicycle tires, soccer balls, and billiard sticks. The tridimensional motion of lines and the gesture of drawing inform these installations, which curator Alma Ruiz refers to as drawing-sculptures.

“Broken Circle” follows Escobar’s recent trajectory of drawing-sculptures, as he generates a new work conceived entirely from the color, form, and behavior of the red bicycle reflectors. Echoing the kinetic effects of geometric abstract art, the repeating undulations and rotations of the mural-like wall installation will interact with the light in the space to generate a flickering effect produced by the visitor’s own movement through the gallery space.

Two floor sculptures—”Crash No. XVI“ and “Crash No. XVII” (both 2010)—will also be exhibited in the gallery space. The shape of each car bumper-turned-sculpture has been determined by the impact the vehicle suffered during an automobile accident. The significance of pairing these two types of artworks lies in the artist’s preoccupation with personal safety. The bike reflectors caution both pedestrians and vehicular drivers of the proximity of a bicycle; the bumpers are reminders of human error and its fatal consequences. In Los Angeles, a city renowned for its car culture, Broken Circle will acquire a particular resonance.

chosen to represent his country at the Latin American Pavilion at the 53rd Biennale di Venezia, Venice, Italy in 2009 and at the 2013 California-Pacific Triennal, Orange County Museum of Art, Newport Beach, California. He is currently part of a group exhibition at the Los Angeles County Museum of Art (LACMA) titled “Fútbol: The Beautiful Game”. Escobar lives and works in Guatemala City, Guatemala.