Sameer Makarius was without doubt one of the most prolific photographers in Buenos Aires during the 1950s and 60s. Almost every weekend, he ventured out taking along with him his two cameras, a Leica and an Olympus, to record his new home town. Makarius arrived in Buenos Aires in 1953 and the city must have made a real impact on him. Europe was scarred and slowly recuperating, but things were completely different here. A bustling, modern, elegant plus very confident capital was waiting to be explored. Taking photographs probably helped him to find his bearings and get to know the customs of the city’s inhabitants really well. But then, everybody’s past often determines both their present and their future. Makarius had studied art in Hungary and – being an artist – was inclined to a visual approach. He started out as a painter and abstraction, in all its various ramifications, was one of the main tendencies at the time, with Makarius following suit. Still, when he came to Argentina he was already principally interested in photography. At some stage, probably between the mid and late nineteen forties, a major shift had thus taken place and it is interesting to speculate why. Maybe, Makarius switched to photography because of practical reasons. Cameras were not only widely available at the time, but also coincided perfectly with his wandering life after the end of the war. Before moving to Argentina, he visited and lived in many countries, for example France and Switzerland. And, last but not least, because of his artistic background, he already knew how to deal with composition, light and shadow. 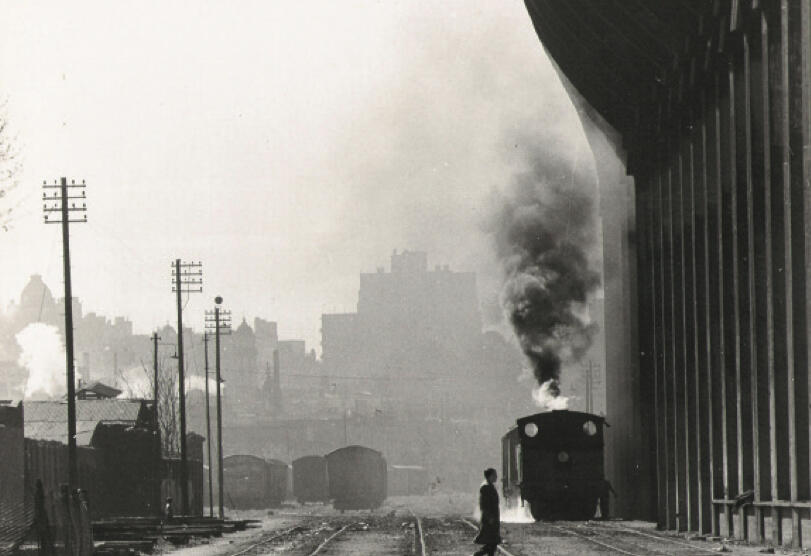 Quite soon after arriving in Buenos Aires, Makarius started to register life in the big city: its best known monuments, street vendors, football matches, families on their Sunday afternoon outings, the horse races, parks, the port, bars, theatres, lottery shops, hoisting cranes, details like door handles, canaries in cages, flapping laundry – indeed, all topics were pursued during his visits to every neighborhood in the city. From Liniers to Constitución, from Recoleta to the parks in Palermo, Makarius went everywhere. But his favorite stamping ground was La Boca, a working-class riverside neighborhood located in the capital’s south-eastern corner. This district, once the favored destination of many Italian immigrants, has remained full of idiosyncrasies and relatively poor to this day. Makarius was immediately attracted to the area: “I fell in love with La Boca; I love the place, yes, in those terms. I like the Italianate part of it, there is a brotherhood there, and I am a Boca fan, just like my grandchild and half of the country.”

The first book Makarius published in 1960 was entitled ‘Buenos Aires y su gente’ (Buenos Aires and its people), whereas the second ‘Buenos Aires, mi ciudad’ (Buenos Aires, My City) came out in 1963. Also, the title of the latter is telling: Makarius – the man who had lived, studied and worked in a number of different countries − had ended up loving his new home.

But why did Makarius take so many pictures of Buenos Aires? There are literally thousands and thousands. Maybe, this huge sprawling city was like another world for him and within this other world there were yet again so many different worlds. Probably, everything and everybody caught his attention because it was so different from what he was used to and, moreover, the mood was much more buoyant and positive here than back home. After all, Hungary was about to be swallowed up by the communist block,

the Cold War hung in the air while the scars of the Second World War hadn’t even healed yet. In my opinion, Makarius’ photographs deal with all of the above and more, but they also show the city through the eyes of a man who walks around in wonder. Therefore, they could only have been taken by him because a certain mindset was needed, apart from the obvious fact that he knew how to take pictures.

Many photographs by Makarius have become emblematic over time, for example the image with the obelisk, which was partly reproduced as the cover of his first book. According to the photographer this picture was taken from the 8th floor of a building on the corner of Corrientes Avenue and Bernardo Yrigoyen Street at about five o’clock in the afternoon. Still, Makarius didn’t have a favorite time of day to take pictures: “The best light of the day depends on what the day is like.”

Many other well known photographs were taken in the neighborhood of La Boca. Quite a few of these include some famous landmarks like the early 20th century Puente transbordador (a transport bridge, which has been out of use for decades) and the Bombonera (‘chocolate box’), the stadium of the very popular football team Boca Juniors (hence Makarius’ reference above about half of the country being a fan). But many more of his photographs have become famous, for example those he took in a slaughterhouse or those dealing with the port. Still, many more examples could be given because Makarius dealt in great detail with Buenos Aires and its inhabitants, their customs, how they lived and worked. Indeed, not one detail escaped him while also tackling both high and low culture because any subject was valid. It is probably not exaggerated to state that Makarius dealt more exhaustively with the city of Buenos Aires than any photographer before or after him, let alone around the nineteen fifties and sixties. In short, he detailed a city and its way of life and in the process he became the chronicler of Buenos Aires par excellence.

This article is based on an interview with Sameer Makarius that took place on Friday 6 February 2009 in his house in Vicente López.