Pablo Reinoso’s Buenos Aires, 1955 bold oeuvre defies perception; it plays with illusion and with the viewer’s participation, offering a framework for reflection. An artist, designer and researcher, Reinoso might describe his trajectory as being “part of this life and the other” because of the way in which, being Argentinean, he has developed a large part of his family and professional life in Paris, where he has resided for more than three decades, without ever losing his connection to his country of origin. His artistic trajectory began when he was a teenager and he embraced sculpture; “I spent my weekends with my grandfather in his carpentry and photography workshop, and when I turned six I was given a workbench as a present; it was wonderful”* While his early works, rendered in traditional materials stone, wood and metal echoed organic shapes with distinct curvilinear outlines, as in the case of Virapitá, India muerta, 1975, or of the sculpture series “Caderas” (Hips), 1977 executed in black lapacho wood in the early 1980s his production denoted a relationship with minimalist art in the sense that shapes reached a total synthesis pure and simple lines. Among these works, Espace vide (Empty Space) and Site stand out. 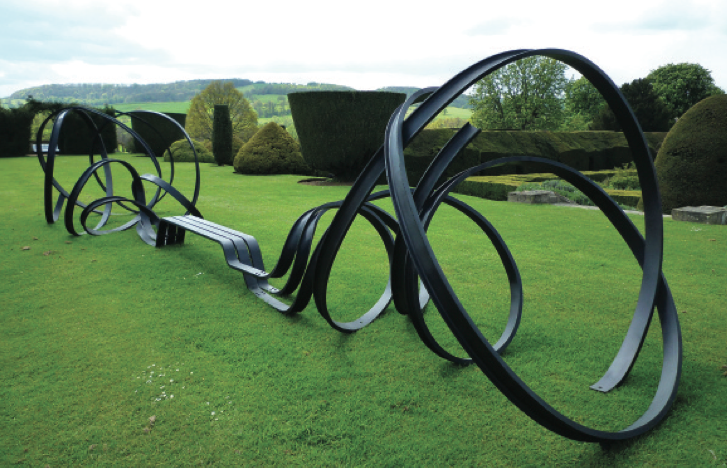 To present a general vision of the work of such a prolific creator may be a complex matter: the wide variety of the formats and the supports he uses, and his stylistic experimentations complicate any attempt to implement a historical reading of an evolutionary or developmental bent. His iconographic richness, his dialogues and his high productivity may put any historian or critic on the spot. Besides his vast production of sculpture, Reinoso has devoted a considerable part of his artistic career to large-scale works for public places Japan, Fukuroi City showing an interest in the incorporation of art in the urban context, as is the case of the “banc spaghetti” series, whose resonance with architecture is fundamental. The idea of the spaghetti benches made its appearance, after years of research by the artist, with the sculpture variations based on the Thonet chairs, No. 14 in particular, created in 1859. It began with the “Thoneteando” series; then came the chairs to be worn, the “Prêt à Thonet”; then the “Prêt à manger”, the chairs to eat, the “Thoneteando” videos, and the “Luthoneterias” or musical chairs, which he created especially for Les Luthiers group. The pieces included in these installations are devoid of detail and they represent a synthesis of the essential features of a traditional bench. Some have monumental proportions, and they stand as powerful iron sculptures in the public space. Their iron surfaces boast a precise and monumental geometry that contrasts with the vegetation around them; they stand firmly against the landscape like man-made constructions, like plain and austere architectures, like huge and refined pieces of metal that evoke the traces of memory, the shadows of the ancestral landscape, anecdote as the mark of memory. Reinoso embarks on a reflection aimed at exploring dimensions of an existential and affective nature that involve the memory and the space in which our life unfolds. Strategically situated, they give rise to an image that alludes to the appropriation of a place.

Reinoso usually creates installations designed especially for the place where he will exhibit his work. Thus, his production acquires a specific character; it might appear to be absolutely simple, but it acquires complexity insofar as it constructs formal connections between volume, symmetry and logical arrangement. In the elements involved, he orchestrates a well thought-out, direct and clear dialectics, which denotes a programmed intentionality with a schematic background. Nothing is random or unexpected; he leaves nothing to chance. Each work is a structure for which he has calculated the components and the whole. Reinoso handles his means, resources and elements with the authority of the person who knows what he is doing, and consequently, the result can be anticipated. Especially noteworthy from a conceptual point of view are notions like “balance”, “light”, “time”, “space”, “speed”, which are important at the time of introducing each element, bearing in mind its role as a constituent part of the work.

Reinoso displays his ability to invent or appropriate the aesthetic and technological resources necessary to articulate his ideas and put them into practice. “Techniques persist; they develop; every project contributes something and I also know that it is fundamental to change one’s points of view, one’s routines, one’s ways of thinking. One must open one’s mind, always. For one does not modify one’s essence, but an open mind illuminates it, and it ceases to be essence to become an inner world that the Other can perceive”.*

For years Reinoso worked in traditional sculptural materials, using the heft and rigidity of wood, stone and metal to express the intangible, until in 1995 there was a radical change in his work. “It was a personal moment of crisis regarding a working method, when the heaviness, the dust, the difficulty to move the work, to sell it, had saturated me. Life as a painter is difficult, but life as a sculptor is much worse. I decided that I would stop, and that I had to invent another path. That is how I opened new doors. I like the metaphor of air, of lightness, as opposed to my earlier work”.* These cloth installations, divided into three metaphorical types of respiration Respirantes, Persistantes and Contractantes envelope air, an element that is abstract, amorphous, and invisible, in fabric, to express a palpable physical reality. For example, the Respirantes, animated by a fan fed by electrical power that is interrupted at regular intervals, are trapped within an endless cycle of subtle mechanized movements; almost imperceptibly, they inflate and deflate, creating a visual and auditory breathing that renders them poignant. At a later stage, Reinoso created some works that were presented as more absolute devices (Dr. Lacan’s Consulting Room, 1998), calling into question above all the self-oriented gaze through the introduction of new materials such as mirrors (L’Autre c’est moi, 1998; El Observado, 2002). The cloth elements are forms in motion that contrast with the solid structure of wood or metal, midway between organic and inert, as in the case of Las Meninas, Ejercicio horizontal (sculptural device, 2000). In the 1990s, Reinoso also became established as a designer. He designed furniture and objects, especially as of 1997, when he embarked on a new activity midway between commercial strategy and art within the LVMH group. He undertook the artistic direction of Parfums Givenchy in 2000 and of Parfums Loewe in 2002, a position that allowed him to create perfume containers and cosmetic lines.

His oeuvre reveals itself to be a meditation on manual work and craftsmanship, which are currently being revalued by art as a critical reaction to the excessive virtuality of electronic supports and as an appreciation of crafts, so dear to the creation of modern art. It may be said that his work is a demonstration of the possibilities of the material and its handling, a way of redefining art as pure technique tekne. It is the example of the homo ludens that experiments with materials and shapes in order to gather the knowledge linked to a practice, without symbolic traits, which relates him to the minimalist aesthetics. “Materials are determinant. One must know if one wants them to determine something in the work. They must not dominate the work. I use them, I know them and I apply them like a painter applies a color. Besides, as a designer, it is impossible to ignore them”,*

Reinoso takes the decontextualization of objects via the modification of their utilitarian qualities as his point of departure in the pursuit of an original gaze. The profound mutation that sweeps over chairs, benches, shoes, warns the viewer of the existence of something concealed that must be explained. His work contains all the singular energy of that which has been created, evoking not only other disciplines but also different ways of seeing. His approach to objects denotes a creator who has managed to translate the different expressive languages in an evident way.

A sensible artist, his work is informed by a complex sphere of relations that include the biographic due to their link with art history and the world of psychoanalysis, which announce the absolute triumph of the image.

*Interview with Pablo Reinoso, by Patricia Avena Navarro, May 2010

Pablo Reinoso is an artist and designer born in Buenos Aires, Argentina, in 1955. He has lived and worked in Paris since 1979. He had his most recent solo exhibition at the Museum of Latin American Art, MALBA, Buenos Aires, Argentina (2009), and his latest group shows include the one featured at the Museum für Kunst und Gewerbe, Hamburg, Germany, Sudeley Castle, Carpenters Workshop Gallery, London, UK; Design Basel, Carpenters Workshop Gallery, Bâle, Switzertland; Art Basel, Ruth Benzacar Gallery, Bâle, Switzertland, ArteBa, Ruth Benzacar Gallery, Buenos Aires, Argentina, and Baby Foot, The Game (during FIFA world cup 2010), Carpenters Workshop Gallery, London, UK., all in 2010. Reinoso has practiced sculpture since he was a teenager. For a long time he worked mainly with wood, slate, marble, brass, and steel. He focused his search on articulation and metonymy as well as on space and time. In 1995 he decided to extend his practice to other materials.. To “materialize” this change, he chose air. Also in the 1990s, he consolidated his position as a designer. He designed furniture (Pocketable, 1998) and a great number of objects. He created a new Leage Cup for the Ligue de Football Professionnel (2003). Used to changing paths, the artist show us that function and form are not evident. In time, an objectivation of his art work emerges. He combines his work as sculptor and designer, reinterpreting furniture and placing it in new paradigms.