The Historical Object of Desire
By Juan Ledezma

Last year I proposed a reading of Arturo Herrera’s output that counters previous interpretations. That first text steps back from other writers’ psychoanalytic treatment of Herrera’s tendency to fragment the silhouettes of cartoon figures and reinscribe them in a both gestural and serialized mode of abstraction. Though Herrera has related his techniques to such formal notions as “structure,” critics argue that the hybrid body thereby obtained responds to the logic of desire. They might be right. The “outlines, contours, pliant shapes” that Ingrid Schaffner finds in the collages suggest a diffuse palpability. They supply a conduit for what seems an “unconscious force,” sometimes aggressive, that courses through the sinuous bits of bodies taken from filmed versions of children’s tales. The very resort to the cinematic—even in the form of animated cartoons—relates to the gaze’s desiring inquisitiveness, a feature remarked upon by cinema studies. Overall, the artist’s early collages evoke what Fredric Jameson affirms of the act of seeing: “The visual [...] has its end in rapt, mindless fascination.” Seeing is innately drenched in pleasure— especially as it focuses on a movie, for “films in general,” he adds, “ask us to stare at the world as though it were a naked body.”1 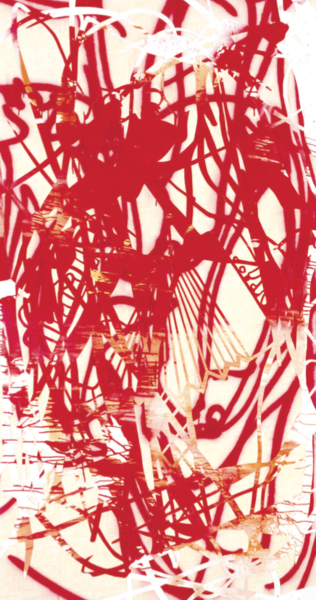 But if desire enters the artist’s treatment of mass-cultural products, it is a desire that belongs to nobody. Herrera’s work is not autobiographic. And the very segmentation that serves as its formative principle ensures that whatever pleasure is contained in seeing be always negated, displaced. Desire fails to articulate into an object that could identify a specific subject: it remains partial, exposed to further segmentation and loss. One might add that the drive to touch found there is often attached to bodies that culture excludes from the desirable: ducks, for instance, or dwarves. Desire adheres to a surface that repels it, even when the haptic drive relates to the viscous consistency of abstract marks. This tension between attraction and repulsion, the whole mechanics of projection, displacement and repression, clearly lends itself to a psychoanalytic reading. As important, such terms might offer tools to approach Herrera’s interest in the “ambiguity” of discourse. They enable a better view of the intricate way in which both desire and meaning are invoked and repressed at the same time. That I opted for a quite different method responds to the conviction that a psychoanalytic evaluation would flatten the work if it didn’t consider another problem raised by the artist—the issue of “late abstraction”; the validity of abstract idioms in this budding century.

To approach Herrera’s work, one should then consider the history of abstract form. And that history is as political as it is formal, insomuch as twentieth-century abstraction—especially its American post-war variants—claimed its own place outside the domain of the popular and the uncritical consumption of easy-to- digest products. Yet instead of reading the artist’s polluted abstract art as a possible postmodern gesture of complacency, I focused on what I think is a critical element: the tension between abstraction’s privatized viewer, forced to forge her own connections to exact meaning out of an opaque field, and the public scale of Herrera’s wall-paintings. Such a scale relates to another aspect of abstract art—especially in its European pre-war variants—that makes of abstraction’s history itself a field of tension. Appearing in tandem with the consolidation of the masses as a political force, abstract art also sought to liberate the subject’s response to form in order to create an alternative discourse that could have a public resonance. Therein lies the source of its contradictions: the “desire”—humanist and political, yet no less polluted by sublimated “drives”—to articulate new modes of experience into a critical social force.

This other desire caved in after both World Wars. It was invalidated by the withering of humanist traditions under mass culture’s escalating power, or repressed by authoritarian forms of the State. It would be left to the post-humanist artist’s gaze either to resort to strategies of desublimation or entrench itself within the limits of aesthetic “autonomy.” Herrera’s proposal is compelling in that it mixes both strategies into a desublimated, if not abject form of abstraction that redeems, I argued, this type of art’s initial desire, the desire for legibility, yet by appropriating the historical other of abstract form. Herrera combines the easy legibility of animated cartoons with abstraction’s critical opacity and plots another condition: that of being neither legible nor abstract, a condition that allows him to reconsider modernism’s history from a transformative standpoint. This strategy’s ability to re-plot historical givens seemed to be confirmed by a recent work. Wall Painting for Berlin consists in a black band painted on the façade of a Berlin building. Though viewers might have read this mural as a writ-large version of modernist painting’s focus on its own material conditions, such as the plane’s flatness, the work’s support is not just a wall turned into a pictorial plane; it is a historical set of events. There, in the district where the building stands, Hitler addressed a mass audience for the first time and a collective began to congeal around Nazi discourse—the discourse that suppressed, as a “degenerate” pursuit, abstraction’s refusal to partake in the indoctrination of the masses.

The mural’s cogency lies in that it engages history as it retreats to the monochrome, the extreme of abstract art’s search for discursive autonomy. Thus, it is by means of visual silence that the work opens itself up to meanings that may be shared by a collective audience; hence its effectiveness in forcing the viewer to reconsider the notion of an oppositional modernism. But just so does Lomo (Loin), one of the artist’s felt pieces recently exhibited, destabilize one’s expectations on the monochrome as a paradigm of modernist art. And this effect is, once again, achieved through the fragment, the slice of a body that now seems to float as a partially summoned presence. The sinuous shape on the felt’s skin and the tactility thereby induced reinforce the viewer’s impression that the piece is not a foreclosed plane, but a dense field on which the eye focuses with the inquisitive intensity, say, of desire. The viewer might then turn back to psychoanalysis and compare the work’s effect, again, to that of a “part object”—a fragment that spurs the desire for a totality that is fundamentally denied. Yet in turning back, that viewer does not invalidate a reading of Herrera’s output in terms of history. She complicates it, forcing even further its tension between legibility and abstraction, and opening it up to a more complex approach— the topic of a possible future text—according to which desire, and partial objects, are also drenched in history.