The meaningful geometry
By Cecilia Fajardo-Hill

Minimum Landscapes, The exhibition by Sao Paulo artist Artur Lescher, at Alejandra von Hartz Gallery, is the first solo show by the artist in the USA. It proposes some new ideas while at the same time summarizing some of Lescher’s constants: the research into materials and the multiple and challenging use of materials; the dialogue between the works in a single space –almost invariably treated as installation even though dealing primarily with single objects; the investigation of and dialogue with architectural space -often transgressing it; the creation of contradictions and oppositions between physical qualities and characteristics – scale, shapes, materials, conditions (such as function versus abstraction; monumental versus intimate; highly polished versus rough, etc.); the use of design; and the pushing of limits and creation of special dynamics of tension and balance. 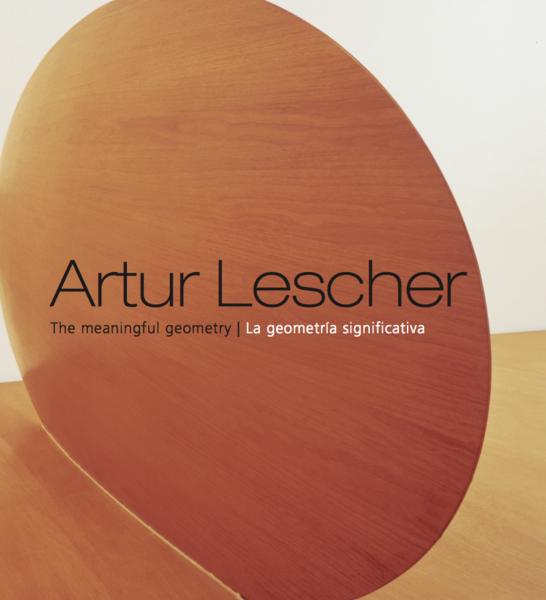 Lescher emerged on the Brazilian art scene in the mid 1980s, particularly with Aerolitos, two surprising and utopian monumental ‘zeppelins’ for the XIX Sao Paulo Biennale in 1987 and his monumental ‘architectural’ installation at the Museum of Modern Art in Sao Paulo, 1989. These early works point to his production to come and to some of the unique and strong characteristics of his oeuvre. Primarily, they disclose the utopian and investigative nature of Lescher’s work, an art where objects conceptually and formally coexist in a dialogical space not so much of contradiction and opposition but of tension and extension. Often in Lescher’s work there is an interesting interplay between ‘domestic’ objects or referents such as shovels, houses, furniture, zeppelin, etc., which are then deconstructed towards a sense of abstraction, contradiction or neutralization of the promised or suggested functionality of the form. For example, the installation of 1989 recognizably alluded to a house, a bridge, structures, architectural volumes; nevertheless the functionality of the installation as inhabitable and meaningful architecture was denied. The installation existed as the representation and simultaneously the deconstruction of an architectural structure and concept – and this Lescher continues to explore in his later work. He is not interested in narrative and/or figuration; therefore this work is an indirect exercise in abstraction. It draws the viewer into a recognizable arena, to then experience an unknown space, beautiful but charged with tension and contradiction.

Lescher trained with Carlos Fajardo, and belongs to the generation of Ernesto Neto, Edgar de Souza, Ana Tavares, among others. Lescher studied the works of Neo-concrete artists such as Lygia Clark, Lygia Pape and Helio Oiticica and observed the ways in which their work evolved towards performance and working with the body. He was also interested in artists such as Kosuth, and philosophers such as Merleau-Ponty and Bergson. Of special interest to him was Minimalism. Lescher describes how in his work he has made an effort to reconcile his formal grammar learned with Fajardo, and the search for a personal poetics.

As for Lescher’s particular exercise in abstraction, its forms and materials have a special resonance within human existence and the natural world. His geometry could be described as ‘meaningful geometry’, a geometry that is connected to the world. It is inevitable to relate his abstraction to the Neo-concrete tradition, because the Neo-concrete particular abstract geometry was not conceived as pure abstraction but as an exercise that was part of a complex reality that made it unique. For example, his important Elipses, exhibited in 2001 in the Nara Roesler Gallery, originate in the shape of the cone as the internal structure that allows the projection of light to the eye. The cone is the link between the geometric form and the gaze of the viewer. The Elipses are the result of cutting the cone. These sculptures were installed themselves cutting into the floor of the gallery, on the one hand perfect, smooth, volumetric, wholesome, and on the other hand sharp, thin, tense, precarious and in menacing balance. Lescher is particularly interested in proposing an archaeology of signifiers, for the spectator to reconstruct and reinterpret meanings from fragments and combinations that are somehow recognizable. For example, the installation In-Door Landscape, for the 25th Sao Paulo Biennale 2002, was constituted by two large and interactive unstable structures; one rocking platform made of wood alluding to a boat, and the other, an enormous plastic container filled with water alluding to the sea. But a sea trapped in a transparent plastic geometric volume, and placed in a building is not the sea, the same way that the platform cannot be a boat. Real allusions are presented and simultaneously negated. Reality and fiction coexist in a tense interplay. A new strategy is proposed in Minimum Landscapes at the Alejandra Von Hartz Gallery. Whereas in the 1980s and 90s Lescher employed recognizable forms to create abstractions; in the recent work, the artist exhibits works which are totally abstract but that allude metonymically to the real world. In this case, they allude to lakes, columns, comets, rivers, and so forth. The title of the show refers directly to an idea of landscape which contradictorily is associated to minimalism, synthesis, rigueur. For example The River, 2006, represents an idea of a river. It is a monotype of hundreds of meters of offset paper and wood which unites a series of characteristics of a river: circularity, extension, fluidity, etc. Lakes, 2006 is a diptych of two pools of black granite which hover delicately over the floor. Linha d’Agua (Water Line), 2005, returns to the elliptical shape, in this case cutting into the wall - only one third outside the wall – and referring to the water line in boats. Here color is employed to mark a frontier, in contrast with wood. A central component in Lescher’s work is architecture, both as syntax and as context.

The tension found in the large scale works described above becomes much more subtle though still equally strong in this show. ‘White column’ –Untitled, 2007- produces an unexpected sense of vertigo or unbalance, because of the tension created between the form - almost needle thin on top with at the bottom a deceptive conical base - and the way it hovers subtly above the floor. Lescher’s constant experimentation with materials is also on view here. He has commented that he perceives in each material a type of personality, that materials carry their own information, that the visual possibilities already reside inside the material. His role is to find ways/forms to make visible the internal phenomena of the materials.1 Two new pieces from 2007 illustrate this, in the form of articulated and transformable configuration beams, which integrate wood and red acrylic. These stem from the idea of constructing lines that mark the encounter of different architectural planes. The difference in the materials and colors mark the transitions, and create an artificial contrast which stresses a limit.

Minimum Landscapes is an exhibition that evokes the idea of landscape, marking a frontier between a fictional and a real architecture. The geometry proposed is rigorous but not dogmatic, stable and unstable simultaneously, and it is open for the spectator to approach it by free association with the real world and thus to ‘extend’ its formalism.