Who was Ana Mendieta? Who is Ana Mendieta today? “One of the most inventive and iconoclastic artists of the late 20th century;”1 such the categorical assertion of Olga Viso, director of the Hirshhorn Museum and Sculpture Garden in Washington, D.C., which staged in 2004 a retrospective that was fundamental for the necessary rereading of her body of work, for she is also one of the most famous Latin American artists and one of the least understood in her integral dimension. 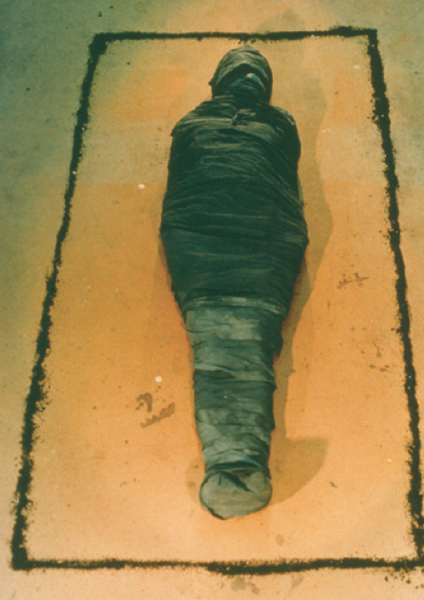 Mendieta transformed the history of Body Art and Land Art through the creation of her unforgettable Earth Body, the name she assigned to her work, derived from the fusion between her body and the natural loci containing the origin and the foundational myths anchored in the primordial forces of the being. She created a unique mode of sculpture practice derived from solo performances which she documented with film and photography. But for nearly a decade and a half, a shadow was cast over her art by the trail of her death, which was as absurd as it was controversial.

In 1988, when The New York Times published the outcome of the criminal lawsuit against her husband, Carl Andre, who was with her when she fell from a window in her apartment, it stated that the sculptor had been acquitted of his wife’s murder without even mentioning his name in the first paragraph. He was named in the fifth, but only towards the end of the article was it specified that “Ms. Mendieta,” “born in Cuba,” “was not so well known, although her sculptures were gaining prominence.” That same year, Julia Herzberg published her crucial doctoral dissertation on the work that Mendieta had produced in the 1970s, while she was a student of the Intermedia Program created by Hans Breder at the Center for New Performing Arts, in Iowa. A time when she created works like Facial Cosmetic Variations, prior to Cindy Sherman’s performances, or the performance in which, naked and on her knees, she sculpted the face and hands of a skeleton and then lay down on top of its white bones, in a rite of rebirth which long preceded Abramovic’s well known Nude with Skeleton. During that decade, interspersed with trips to Mexico, she created sculptures preserved only through documentary records using her own naked body, her back turned to the viewer and covered with green grass (Grass on Woman) or the first works including texts written in blood, and the film Creek #2, in which she plays the role of an Ophelia floating on her back in the water, amongst countless other works that reveal her methodical rigor and an experimental value for which there is still no definite situated perspective in the history of contemporary art.

During the 1990s, as Viso explains in Unseen Ana Mendieta (2008), her life and her work, which often polarized the divisions within the art world (First and Third World, established and emerging artists, powerful and marginal people), served other people’s personal, political and social agendas. And today, when her figure has the relevance of those who have been immortalized, and she is, together with Félix González Torres who also died young, although as the result of a mythical illness one of the few Latin American artists to be incorporated in the history of United States art, she continues to be insufficiently understood in her multi-faceted dimensions.

The tribute paid to this artist by Galerie Lelong which guards and represents her legacy since 1990 and has carried out a remarkable rediscovery process at Pinta New York and at the exhibition it presented, Ana Mendieta: Documentation and Artwork, 1972 - 1985, are opportunities to delve into the work of this artist who passed away a quarter of a century ago, at 36 years old, in the prime of her life, leaving behind innumerable projects, and a vast oeuvre that comprises much more than the recording of her performances of the 1970s, or her cave sculptures, or the legendary series of 20 silhouettes rendered with earthen materials, and the powerful works with powder in which she burned her own silhouette and those of the ancestral Taino or Afro-Cuban female deities: it includes thousands of 35mm slides, 81 super eight films, hundreds of photographic prints, of black and white negatives, drawings, sketch books, letters and public art projects.2 The redimensioning of what is one of the most touching bodies of work of the 20th century on account of the incessant use of the artist’s own body as a tool in the abyssal search for identity and the origin, implies understanding the innovations and the differences with respect to predecessors like Robert Smithson; the character of her explorations, which preceded or were concomitant with those of her peers, and the dimension of her visions that incorporate elements ranging from the influence of the Viennese Actionists to her passion for archaeology or the Pre-Hispanic or Afro-Cuban mystic legacy, which was even demonized by certain sectors in a gesture that was similar to the Conquistadores’reaction to what they could not understand in the New World. The utilization of blood to exorcize violence against women or to reaffirm the presence of the body in the natural landscape was connected, in Mendieta’s work, to the vision of the sacred as understood by Mircea Elíade whom she read. In ahistorical societies, which choose to abolish time through rites of repetition, and in the archaic modes of domestication of space that fascinated the archaeologist Leroi-Gourhan, she inscribed her experimental art, capable of fusing aspects of primitive and conceptual art, mythical traditions and ecology, the land and performance, the non-territorial concern for violence against the female gender and the transcultural, displaced identities and the universal archetype.

Understanding her work demands liberating restrainments, stereotypes, and easy demarcations, for Ana Mendieta cannot be inscribed unequivocally in any territory. Viso affirms in Ana Mendieta: Earth Body, that throughout a decade she was not considered outside of the feminist context or of the work by other exiles, and that in the media she was discriminated ethnically and sexually as “an other”. But it is equally true that, as Jane Blocker remarks in Where is Ana Mendieta?3, she challenged the incapacity for inclusion of the American society, deliberately assuming the wish to continue to be “an other”. Deeply identified with the condemnation of violence against women, she was not afraid to point out that feminism in the United States used to be a white middle class movement. In Blocker’s words: “She posits woman, earth, primitive, and nation as home, and then travels from it, leaving behind a meaningful breach.”4 In the midst of the minimalist boom, she prided herself on “not saying less, but saying more, saying too much, with the wrong accent and intonation, mixing up metaphors, making illegal crossings and continually transforming the language in such a way that it will never be possible to assimilate its effects in an essential ethnicity.” Subjected to displacements since she was twelve years old, when she was transplanted from Cuba to the United States, she longed to “re-establish the ties that link me to the universe”. That urgent need for reconnection with the earth which is now recovered via ecological art also presupposes a kind of pioneering ethics. She pursued “the unconscious urges that animate the world (...) the nameless land of the origin.” And not only the nameless land, but also the one that is de-localized, open and connected to the human being’s deepest substrata”. Blocker summarized it thus: “She produced a single female baptized by earth in a time before history.”5 Contrasting with the works of Robert Smithson as for example his Spiral Getty which inscribe an also archaic geometry but from a distant aerial view, are the figures crafted by Mendieta using her naked body to excavate a negative space and animate it. The scale of her vision was her own body in the forefront and the materials she used were those provided by the natural world. The quality of her performances was that of rites of passage, a solitary mode of immersion in nature that she documented, and while it separated her from the tradition of post-modern performance, it reconnected her with the timeless power that art has had since the beginning of the world. As Amanda Boetzkes concludes, “the artist does not only attempt to create a space in which the earth receives her body, but through her way of withdrawing it, provides a surface on which the elementary may appear the silueta fills with water, combustion or is blown apart and illuminates the face of the earth.”6

Ana Mendieta (Havana, 1948 New York 1985) was born in Cuba into a family of illustrious ancestors, the daughter of a lawyer who supported the 26th of July Movement, but rejected Communism. In 1961 her family, pressured by political harassment, sent her into exile. This uprooting began at the age of twelve, in the Iowa foster step homes where she ended up living together with her sister, Raquelita. In 1967 she enrolled in the University of Iowa’s “Intermedia” program, and in that pioneering experimental space, she transformed art into a way back to herself. She obtained a Master’s degree in Painting in 1972, but in the course of that decade she became the mature creator of an oeuvre that shifted the execution spaces and the ways of conceiving performance and land art. Oaxaca, Mexico, became her second home, where ritual pieces of vital regeneration flourished. After she moved to New York in 1978, Mendieta joined the feminist cooperative gallery A.I.R, where she exhibited her photographic series, Silueta. As of 1980, her periodic returns to Cuba where she connected with the generation of Volumen Uno marked the beginning of her exploration of Afro-Cuban imagery. In 1981 she carved a series of goddess figures in the grottoes of Jaruco park, Cuba, as a trace of her return. In 1983, she won the Rome Award, which gave her a residency at the American Academy in Rome, Italy. She explored mediums such as wood, seeking to transcend the ephemeral nature of her interventions with powder or flowers, documented in films and photographs. In 1985, countless ideas and incipient projects were interrupted by a violent death. In the introduction for Christine Redfern’s book, Who is Ana Mendieta?, critic Lucy Lippard wrote: “May there be many more visual outcries like this one, to avenge the loss of women like Ana Mendieta.”