After an in-depth analysis of the homonymous book on economic policy that established the free market guidelines implemented in Chile during the military dictatorship, El Ladrillo (The Brick) questions the eco-political model imposed by Augusto Pinochet and reflects on its cultural and social impact in subsequent years. In the exhibited works, there are references to social and economic history, collective memory and artistic movements such as Russian Constructivism, Neoplasticism, Latin American conceptual art of the 1970s and 1980s, minimalism and Arte Povera. 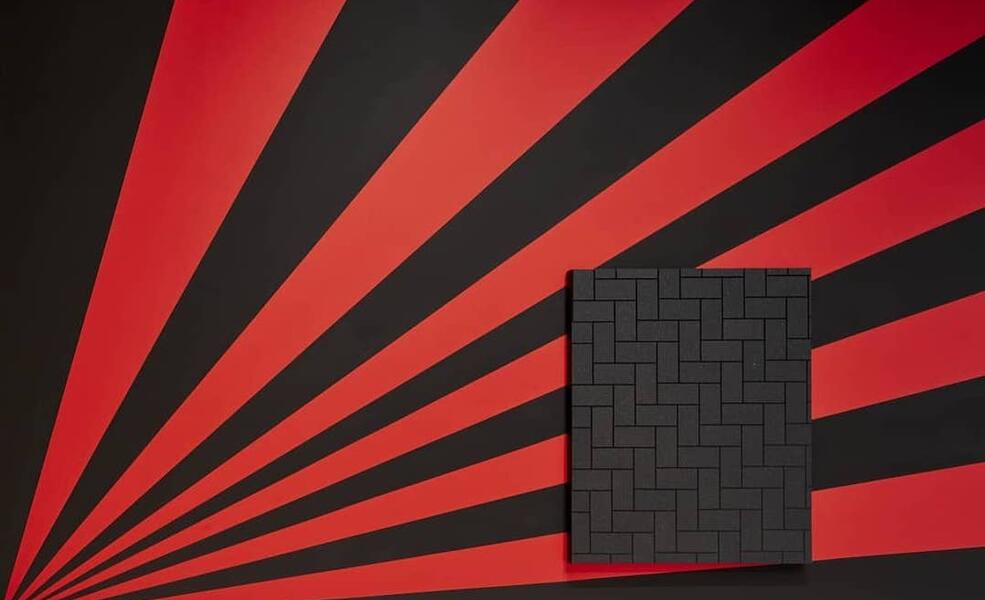 As part of an act of coherence with his discourse of political and economic criticism, Hamilton works with simple materials, so in this exhibition he uses elements typical of the construction and masonry sector such as saws, gloves, bricks and sandpaper, to create —Poetically— simple and inexpensive compositions. In turn, it reformulates the understanding of some concepts such as balance/imbalance, equality/inequality, regulation/deregulation and individual/community. The word brick is approached from different connotations: the title of the book, as an expression of the crisis in the real estate market or subprime crisis triggered in 2008, as well as in its material and utilitarian dimension.

For Hamilton, “neoliberalism and the great economic crisis caused by neoliberal ideology is something that is present in our daily lives in many parts of the world. In Chile, the social outbreak that occurred last year had to do with the crisis of a model sustained on the basis of the extreme individualism and lack of social and economic rights that neoliberalism promotes. This issue of the economy is something that crosses our entire lives”.

The exhibition is made up of three series. The first, The Chicago Boys Project (2018-2019) is articulated around unpublished photographs that, like still-lives, combine documents printed on red paper, workers' gloves dyed black and other objects. These document narrate in a fragmentary way what was, in the context of the Cold War, the most important ideological conflict that had occurred in the world in recent decades: the battle for economic thought and, from there, the modeling of our societies.

Another body of work that also reflects on the history of painting and the working conditions in our societies is Abrasive Painting (2015-present). The formalist character of these works is given by works of the constructivists, concrete art and suprematism.

Finally, Sculptures with tools (1998-present) is a set of pieces of intervention and manipulation of instruments for manual use (saws, chuzos, machetes, spatulas, etc.) with which the artist refers to the precariousness of the world of work and workers, as opposed to the source of wealth they represent for the business sector.

About El Ladrillo (The Brick)

The book was written in the early 1970s by a group of Chilean economists who were students of the controversial Nobel Prize in economics Milton Friedman (1912-2006) at the University of Chicago, hence they were known as the Chicago Boys. In its pages, radical economic measures are proposed, as an antidote, to cure Chilean society of the socialist dream, among them: the total opening of markets, the reduction of tariffs and taxes, the reduction of public spending and the promoting the privatization of goods and services.