Among security protocols, a contingent of journalists and curious visitors, ARCOmadrid officially inaugurated with the visit of the king and queen, Felipe and Letizia, this morning. 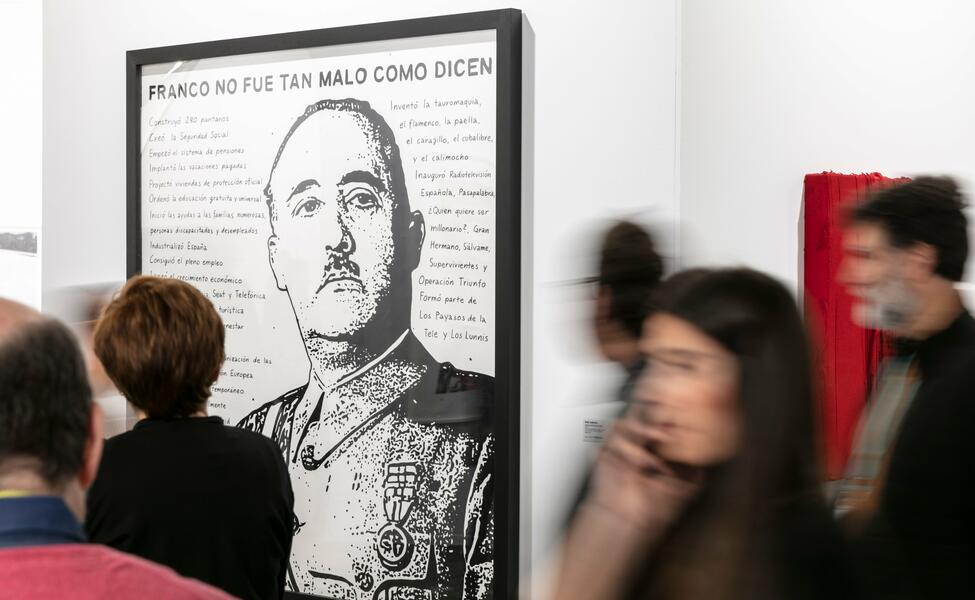 As every year, the inaugural tour was specially designed for the monarchs by the fair team. In this context and in solidarity with the media crisis of the coronavirus, the kings also visited the Italian gallery Francesca Minini, where there was no talk of anything other than the works exhibited.

Unlike last year, the tour made by Felipe and Letizia has not had to evade anti monarchy works - as happened with the work Ninot, by Madrid artists Santiago Sierra and Eugenio Merino, at ARCO 2019. However, the tour avoided the work “Franco no era tan malo como dicen” (Franco was not as bad as they say), by Riiko Sakkinen (Helsinki, 1976), the same artist who the previous year was controversial for his work “Nuestros reyes preferidos”

(Our favorite monarchs). Unfortunately, there have already been several complaints from those who misunderstood the work as fascist and have requested its withdrawal.

During the tour the monarchs, Maribel López, director of the fair, and the Minister of Culture, José Manuel Rodríguez Uribes visited about twenty galleries, including Álvaro Alcázar, 1Mirarada Madrid, Joan Prats and Perrotin, in addition to the two emblematic Spanish galleries Juana de Aizpuru and Helga de Alvear. What apparently caught the attention were the works of the painter Juan Ulsé (Santander, 1954) and the sculptor Juan Garaizabal (Madrid, 1971).

After the reasonable chaos that suggests the visit of the crown, ARCO 2020 has officially launched and with it, a very wide schedule of conferences, debates and presentations that run in line with the new orientation of the fair: prioritize knowledge.

15: 00- Auditorium: Museums out of it. European and Iberoamerican Museumsforum. Alternative Museums, experiences and talks.

16: 00- Auditorium: Collecting Forum. Ways to see and beyond. The art of collecting. Conversation: Collecting time.

18: 30- Auditorium: Photo ArtLibris. Rise the forms. The languages ​​of performance.