NOTHING HAPPENS HERE: AN ILLUSTRATION OF THE PERUVIAN POLITICAL CLASS

As a result of his return to Peru in 2017, after having lived fifteen years in Spain, the plastic artist Miguel Aguirre (Lima, Peru, 2017) presents Aqui no pasa nada (Nothing Happens Here) in Galería del Paseo. Through a multidisciplinary proposal ―painting, weaving, drawing, prints and objects― in collaboration with other artists, the exhibition illustrates the idiosyncratic features of the Peruvian political class since the foundation of the republic: all founded on corruption. 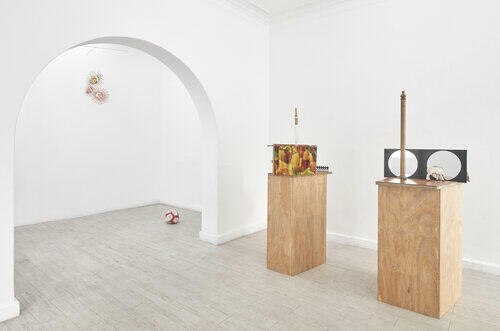 Anchored in the reading of historians Alfonso W. Quiroz ―author of the History of corruption in Peru― and Jorge Basadre, Aguirre's exposition puts the focus of his representations on the lack of archetypes and ideals, constitutive elements of a (positive) national identity. Likewise, the images and symbols to which the artist alludes establish a dialogue between Peru prior to the Bicentennial and today, its networks of power and the successive political contexts.

Among the most outstanding works of Aquí no pasa nada ―title, by the way, which connotes an absolutely stagnant political class―can be mentioned Encuentre usted las siete diferencias (Find by yourself the seven differences), an artwork developed in collaboration with Elvia Paucar where the artists made a tissue reproduction of the last edition of Navarrete school pictures of the six rulers of the period between 1990 and 2018; Ríos de tinta (Ink Rivers) ―work that directly challenges the aforementioned― a drawing made in blue ink that oscillates between a sea, a weaving, the river ―the passage of time within a homogeneous framework.

Aquí no pasa nada is, in short, a historical review of those who have governed Peru and that, through criticism, promote the construction of national values ​​that represent citizens and not a corrupt and permanent plutocracy. On a larger scale, Miguel Aguirre's artwork is a representation of a political trend throughout Latin America, excluding minimal exceptions.

The exhibition will remain exhibited throughout September at the Miraflores headquarters (Lima, Peru) of Galería del Paseo, located at 770 General Burgundy Street.