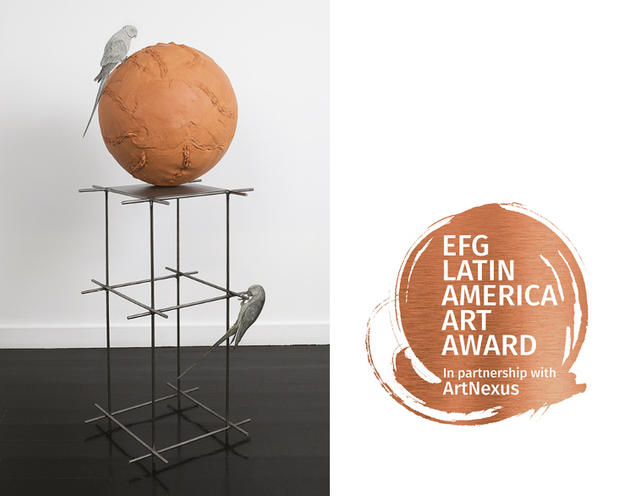 The work was selected as a digital initiative at arteBA by Alexia Tala, art critic and historian with an emphasis on Latin America, and Celia Sredni de Birbragher, Editor and Publisher of ArtNexus, on behalf of the EFG Latin America Art Award.

Daniel Otero Torres was born in 1985 in Bogota and currently lives in Paris. He learned some traditional techniques of pottery in Istanbul. He spent weeks with Turkish artisans to understand the creative possibilities of the clay. He has ever since incorporated the terracottas as part of his artistic practice. Arctic White is within a series of globes, representing the Earth, and detailed the patterns of several animal migrations. The way creatures move freely around the globe contrast with the borders that humans impose on each other. The sculpture features parakeets, perched onto the steel plinth. These birds —originally from South America, and sold as pets— have become an invasive species in many cities of Europe. Otero Torres digs into the complex and sometimes contradictory logic of globalized capitalism and migration policies.

EFG Latin America Art Award, now in its tenth year, was created to support a Latin American artist whose work is pre-selected through a juried process in Latin American contemporary art fairs throughout each year. The award aims to promote the production of Latin American visual arts and to increase awareness of regional fairs among collectors worldwide, with the strategic development by Liaisons.

As in prior years, once each of the finalists in the participating Latin American art fairs has been nominated, the winner will be selected and announced at Pinta Miami during Art Basel Week. EFG Capital will acquire a representative work of art from the winning artist. The entire collection of the EFG Latin America