In the framework of the online edition of arteBA 2020, Malba (Museum of Latin American Art of Buenos Aires) incorporated a photograph and a mask of Maris Bustamante thanks to the contribution of ICBC Argentina. A photograph of Milagros de la Torre is also added thanks to the donation of a private collector. The two works were chosen in Argentine galleries. 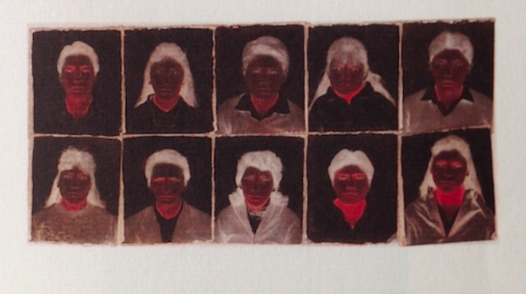 For the sixth consecutive year and thanks to the donation of $ 1,050,000 pesos by ICBC Argentina, Malba acquired at the Walden Gallery the photograph and mask “El pene como instrumento de trabajo/ Para quitarle a Freud lo macho” (The penis as a work tool / To take away Freud's macho manner”, 1982 from Maris Bustamante (Mexico City, 1949).

Likewise, thanks to the contribution of Sergio Quattrini (member of the museum's Acquisitions Committee), the photograph “Untitled” from the series Bajo el sol negro (under the black sun), 1991-1993 by Milagros de la Torre (Lima, 1965), chosen in the Rolf Art gallery. In this way, both artists enter the Malba Collection.

Due to the coronavirus pandemic, and given that the arteBA Foundation was forced to indefinitely postpone its fair in La Rural, the photographs were selected in the special online edition of arteBA on the Artsy site. With this action, the museum continues to increase the representation of women artists in its collection; reinforcing the commitment to contemporary art; and especially supporting the art scene in this unique moment.

On this occasion, the selection was in charge of Gabriela Rangel, Artistic Director of Malba, along with the following members of the Scientific Artistic Committee: Andrea Giunta, Adriano Pedrosa, Julieta González, Octavio Zaya, Natalia Majluf and Gonzalo Aguilar, who met online to debate and make the final decision.

On the work of Maris Bustamante, Andrea Giunta said: "It is an iconic work of Latin American feminism and performance art that, together with the pieces by Magalí Lara and Mónica Mayer acquired by Malba in recent years, completes a set of key pieces of pioneering artists of the Mexican feminist movement of the seventies and eighties ".

On the other hand, for Natalia Majluf, "Under the Black Sun" by the artist Milagros de la Torre “is one of the seminal and iconic works of one of the most internationally recognized Peruvian conceptual photography artists, in which she addresses the central themes of her production such as memory, identity, violence, pain and trauma in Peru and Latin America.”

It is a black and white photo, a vintage copy (signed by the artist and with the No Grupo stamp) in which Bustamante criticizes, in a kind of performance for the camera, "falocracy" prevailing in different work environments. The image shows the artist in a position that refers to the Gioconda or Mona Lisa wearing a plastic accessory: glasses with an integrated penis, instead of a nose.

Bustamante made variations of this work, such as the die-cut masks that she distributed to the public during one of the "Assemblies of Visual Moments" that the Non-Group presented at the Museum of Modern Art in Mexico in 1982. The work acts as a confrontation with the figure of Sigmund Freud and the supposed envy of the woman for the penis, when it came to getting a job: "It was a criticism that no one had made against the macho part of psychoanalysis," explains the artist.

Since the 1970s she has conceived and produced "not necessarily aesthetic" artistic objects. She was a founding member of two important contemporary art groups in Latin America, the No-Grupo (1977-1983), along with Rubén Valencia, Alfredo Núñez and Melquiades Herrera, and Polvo de Gallina Negra (1983-1993), with Mónica Mayer. In her search for non-traditional supports, she performs happenings, mail art, art-objects and artist books. Among her most controversial works is The Taco Patent (1979), when she registered the Mexican taco as her intellectual property. She created the First Inventory of PIAS forms in Mexico from 1922 to 1992 —PIAS as the initials of Performances, Installations, and Ambiances—, a series of artistic actions through which she seeks to move, amuse, question, and seduce. These forms are found in the (anti) tributes to Pablo Picasso, Sor Juana Inés de la Cruz and Marcel Duchamp. Her performance The Penis as a Work Instrument (1982) is inscribed in this series. In addition to her artistic practice, she is theoretical and academic. She was a research professor at the Autonomous Metropolitan University of the Azcapotzalco Unit for 30 years, and is now a professor emeritus. Pioneer of feminist art, Maris Bustamante naturally redefined the perception of the female artist and her place in the field of Mexican art. She describes herself as a visual artist "neopostransconceptualist" in the strident modality, which simply means that she makes fun of any label that pigeonholes her.

In the series "Under the Black Sun", Milagros de la Torre (Lima, 1965) recovers a portrait technique used by street photographers in Cusco, a rudimentary process that involves the clarification of the skin tone of those portrayed and which produces an "improvement" not only on aesthetic but also racial, cultural and economic aspects of the subject. Emulating the process, De la Torre takes these photographs directly on photographic paper with an artisanal drawer camera and stops the portraits in the negative phase, questioning the idea of ​​identity registration of the people, leaving their purpose unresolved and barely identifying the subject. The artist thus reveals the inherent manipulation and distortion of the photographic medium.

"The "popular"is not a simple visual reference here, nor is there any display of empathy or pretense of forging false equivalences with artistic and cosmopolitan photography. By using the techniques of popular photographers, but also its spaces and its audience, Milagros de The Tower approaches them and pays them a sincere tribute. But by also establishing distance, her work reveals scrupulous honesty and an insistent critical capacity to question the uses of their technique. The black sun of Cusco neither reveals nor reflects; it only presents a world where representation itself is called into question. The unusual beauty of these images depends largely on their conceptual charge, but also on the subtlety with which Milagros de la Torre poeticizes the ghosts of identity," Majluf wrote about the series.

About the series: This project is based on the rudimentary technique of the square photographer from the city of Cuzco, Peru, who takes the photographs directly on photographic paper through a drawer camera. The photographer reveals the exposed paper inside the same camera with the help of the developer and the diluted fixer that she has in small recycled cans. After removing the negative on paper and drying it in the intense mountain sun, he automatically appliesa layer of chrome mercury on the skin of the portrayed. Next, he photographes that negative on paper with the red touch-up using his own camera, with which he obtained - after the same development process - a positive or the common identification or photo ID. The innocent retouch lightens the skin of the portrayed person, thus giving him not only a "racial improvement", but also an aesthetic, economic and even cultural one; the latter under the belief that a white-skinned person intrinsically represents all thosequalities. In "Under the Black Sun" these ideas are questioned, leaving the process suspended in the middle, in negative, without any clear resolution, when the photographed still has the red veil over his face.

About Milagros de la Torre (Lima, Peru, 1965). She studied Communications at the University of Lima and Photography at the London College of Printing. She has been into photography since 1991. She has received the Guggenheim scholarship, the Romeo Martínez International Photography Prize and the Ibero-American Prize for Young Creators for the series The Lost Steps (1996). Her work is part of permanent institutional collections in the United States,Latin America and Europe, such as The Art Institute of Chicago; Museum of Fine Arts, Houston; Harvard Art Museum; Reina Sofía National Art Center Museum; Lima Art Museum; National Museum of Fine Arts of Buenos Aires; and the Carrillo Gil Museum of Art in Mexico City, among others. Lives and works in New York.