Banco Ciudad collaborates with the heritage of Argentine museums in arteBA

During the hours prior to the inauguration of the Arteba fair, the representatives of the Municipal Fine Arts Museums of Tandil; of contemporary art of Salta; and Contemporary Art of the South, in the municipality of Lanús; They visited the fair in search of new works to add to the heritage, through the new edition of the Matching Funds-Banco Ciudad program. 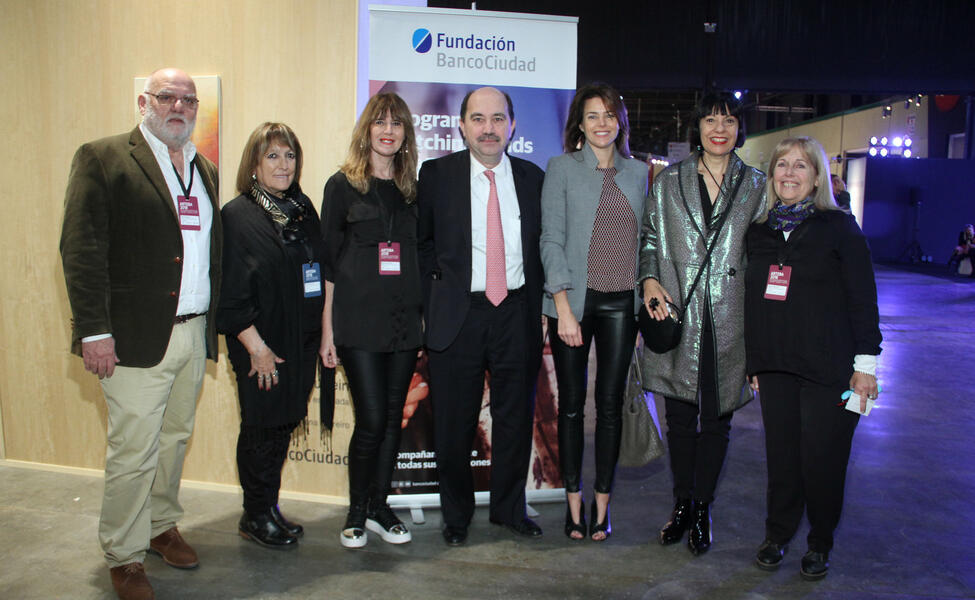 The program that was born in response to the need for museums to incorporate their works of Argentine artists into their collections, made their acquisitions during the First Choice of the fair. The Municipal Museum of Fine Arts of Tandil was able to acquire the work of Carolina Antoniadis, Rizoma (2017), a painting of 100 cm x 200 xm, in ink, acrylic and lacquer from the Diego Obligado Gallery in Rosario. The Museum of Contemporary Art of Salta, acquired two works: The Silver by Agustín Sirai, acrylic on canvas of 120 x 40 cm in the gallery Miranda Bosch and another by Chiachio & Giannone, I Fiori, from the Kabuki series, an embroidery by hand about handkerchief 2005 in the gallery Ruth Benzacar. Finally, the Contemporary Art Museum of the South of Lanús selected Niña Argentina (2017) by Nora Iniesta, 110 x 140 cm from Galería del Infinito and Dreaming the Dream, by the artist Juan Andrés Videla, 45 x 55 cm, from the Gallery Jorge Mara

About the initiative, Javier Ortiz Batalla, President of the Banco Ciudad, declared that "today will be a very intense day together with the representatives of the museums, given that they must choose between more than 80 galleries, and more than 400 artists who participate this year in the fair".

At the same time, he stressed that "practically since its origins, the Banco Ciudad is together with art, through traditional auctions, fostering an inclusive art market, and, for many years, also through the promotion of established and emerging artists , the generation of contests, traveling exhibitions and new art spaces for exhibition. One of the best examples is ArteBA, an initiative that we have accompanied since its first edition, 27 years ago, and for four years in Matching Funds. "
For the fourth consecutive year, Banco Ciudad and ArteBA develop the Matching Funds program that contributes to increasing the heritage of Argentine museums, and encourages third parties to join to respond to the need for museums to incorporate missing works from their respective collections. . Three Argentine museums receive an economic contribution from the Banco Ciudad to encourage the purchase of new works. In turn, each museum equals or exceeds this sum with counterpart funds and thus conforms the total amount of the acquisition value.
During the traditional launch in the MALBA auditorium, Javier Ortiz Batalla, president of Banco Ciudad and Alec Oxenford, president of ArteBA, announced the museums that will enrich their artistic heritage through this initiative.
In previous years, the MAMBA, MALBA and National Museum of Fine Arts of Neuquén participated in the Matching Funds-Banco Ciudad program, the Provincial Museum of Fine Arts "Emilio A. Caraffa" of Córdoba, Municipal Museum of Modern Art of Mendoza (MMAMM), Tigre Art Museum (MAT), Museum of Fine Arts of San Juan and Sívori Museum.
Another of Banco Ciudad's actions as a cultural promotion bank is the promotion of the work of emerging and contemporary artists, generating samples and promoting the presence of their works in the art market. This year, the Banco Ciudad space at ArteBA hopes to surprise again with an installation by Silvia Gurfein, a multidisciplinary artist who obtained the National Scholarship 2012 from the National Fund for the Arts and participated in the Ibero-American Painting Contest of 2005. Her work is in important public and private, national and international collections.

BANKING TO PROMOTE PLASTIC ARTS
Banco Ciudad supports the plastic arts in its different expressions through numerous activities that are mainly based around the main centers of cultural exhibitions in Buenos Aires, and with the artists directly. It also stimulates citizen participation by generating spaces of expression such as the Gente de Mi Ciudad photographic contest or the Acquisition of Painting Prize, and proposes during the year a large calendar with temporary exhibitions of emerging artists.

SPACES OF ART IN BANCO CIUDAD
For five years, the art circuit of Buenos Aires has a permanent exhibition space and art sale, with tradition and the support of a centennial institution such as Banco Ciudad, which celebrates its 140th anniversary this year. In the building complex of 660 Esmeralda Street, there is an exhibition area at different levels, and the most important auction room in Latin America. The proposal of the place is to generate a meeting space between visitors, works and artists, where you can interact with the art world and, at the same time, have the possibility to buy works of excellent quality.
Also, since 2016 Banco Ciudad has added another exhibition space in the City of Buenos Aires, where different established and emerging artists present their works to the visiting public, which coexist with the daily life of the Casa Matriz branch in Florida 302.