ALEXANDER AND BONIN PRESENTS DALTON PAULA: A KIDNAPPER OF SOULS

From September 12 to October 24, 2020, this is Dalton Paula’s first solo exhibition in North America. Each portrait evokes a sense of visual discomfort which serves as a metaphor for what the artist experiences during his visits to quilombos: black communities enduring a daily struggle for better living conditions. 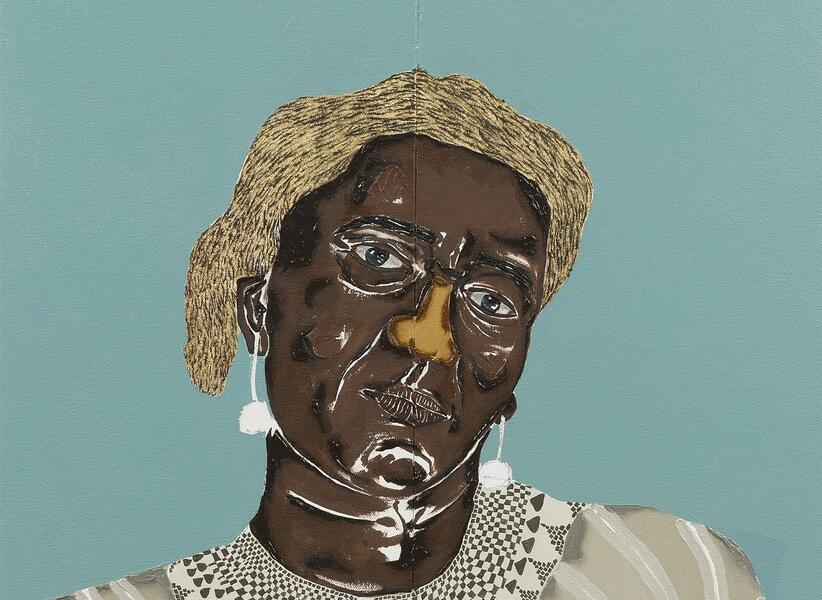 Twenty-four portraits line the gallery. Portrayed on two-part canvases with blue-green backgrounds and gold-streaked hair, are historic Afro-Brazilian figures who have never been visually depicted during their lifetime or posthumously. As part of his research, Paula visited Quilombo Alto do Santana in Goias, near Goiâna, where he works and lives. Quilombos are political organizations and communities of black cultural resistance of African origin that were recreated in Brazil during the 16th to 18 centuries. Paula photographed residents of the quilombo and used these images as the basis for his portraits, where the subjects are illustrated in period clothes and hairstyles. In doing so, Paula constructs a counter-narrative that differs from the predominant representations of the black Brazilian population.

There is an intimacy and a tenderness to Paula’s hand, to the way he infuses each canvas with dignity. The paintings themselves recall early 20th century retratos pintados, in which a formal black-and-white photograph was painted, often with a blue background, and embellished to reflect the desires and fantasies of the subject. There is a parallel absence in many paintings; Paula leaves their jewelry unpainted and unrepresented, reflecting the ongoing dispossession of the wealth of Black Brazilians and their absence from places of power.