There are no frontal or precise ideas in this show; what prevails at all times is a tangential, oblique discourse.
By Píter Ortega Núñez 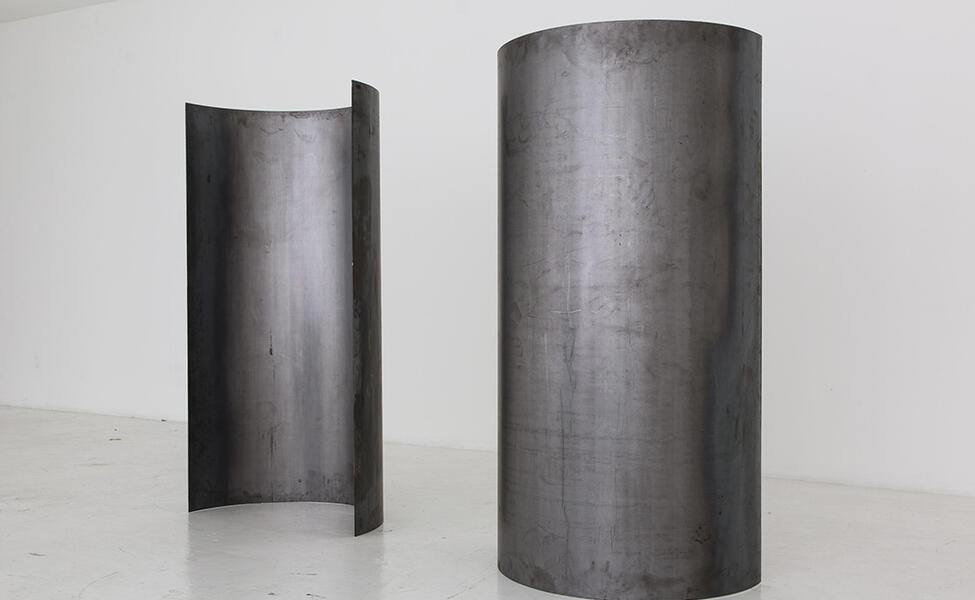 There are exhibitions that are so good that one is left speechless. They are so forceful that they obnubilate thought and render the act of writing intimidating. They imply a shock that is too strong. This is exactly what happened to me recently when I visited Gallery Diet and its exhibition, Horse, by the Los Angeles۔based artist Mateo Tannatt (Los Angeles, 1979). While the show captivated me exceedingly, it has been difficult to engage and start to write about it. Very difficult. Perhaps because of the elusive nature of its messages, the subtlety of its thematic approaches which are extremely metaphysical. There are no frontal or precise ideas in this show; what prevails at all times is a tangential, oblique discourse.

What first surprises the viewer is the simplicity of its staging. Particularly noteworthy are a red door that stands on the floor and rests against the wall; several dice  – and other geometrically shaped objects – made of wood or metal, also placed randomly in the center of one of the galleries, without responding to any apparent spatial distribution logic; some equally geometrical abstract paintings, whose synthesis is restricted solely to the use of red, blue and green tones (one of the paintings simply lies on the floor); and lastly, the screening of a video, complex and ambiguous, but extremely beautiful.

To all the abovementioned we must add the use of the void as an element of signification. The numerous blank walls, as well as the spaces that they create between the works, transform the tour of the exhibition into a sort of meditation or psychological introspection. A strange immobility may be perceived in the show, a feeling of impasse, as if time did not move forward or we were caught in a still of a mysterious film. It is something close to the experience of dreams.

Evidence of this is the exhibited video, titled Studio Agony (Revisited), made in 2015. It shows a considerably oneiric scene: a group of animals (hens, sheep, donkeys, and ducks, among others) walk inside a warehouse reminiscent of those that characteristically host major art exhibits, except that this is a half۔built venue. At points in the video, these animals come across a man who moves slowly and discreetly, until he ends up levitating in a pose that recalls a hanged man, while the animals watch him in a dialogue of the deaf marked by absurdity and senselessness.  Here the readings might be very different. One of them would be associated to a critique of the very universe of art and its institutions, especially those related to contemporary art. Here the lobby is occupied by animals; they are the protagonists of this exotic visit in which artworks are nowhere to be seen. What are these animals looking for? How have they reached this place? What is their relationship with the human universe? What mission have they been entrusted with? Interesting questions that render this piece the most genuine one within the exhibition.

This is one of those must۔see shows. We will leave full of doubts and uncertainties, but we must visit it. Many times contemporary art causes us anguish; it challenges us with its ambiguity, with its impenetrability. But we human beings continue to like what is difficult. It is something inevitable. And here is Horse to prove it.