Arte x Arte debuts its new stage as a foundation with an exceptional exhibition that investigates the intersections between painting and photography. 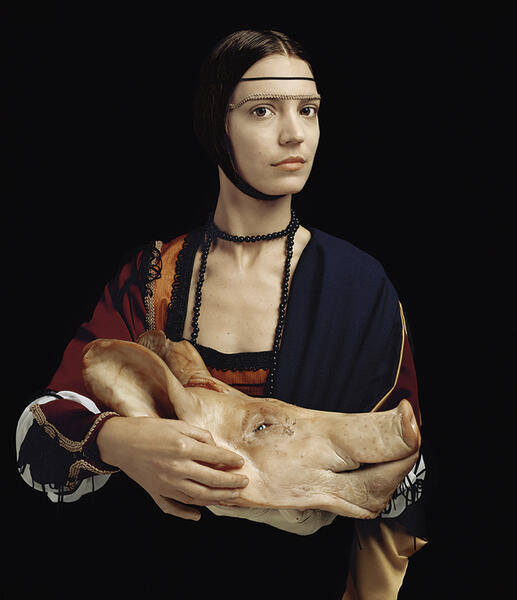 In 2008, the decision of the jury, of which the author of this text was also a member, of awarding the first prize of the Fundación de Guayaquil’s July Painting Salon to the photograph Los que se fueron (Those who left) caused quite a commotion. Trained also as a painter, the Ecuadorean artist Geovany Verdezoto portrays in a triptych Ecuadorean emigrants in Rome. The dialogue between his work and painting was evidenced by its being “formally close to its canons in compositional terms,” through the use of photographic images as paintbrushes with subsequent digital treatments.

The exhibition In fraganti. Fotografía y pintura en el arte argentino contemporáneo (In fraganti. Photography and Painting in Contemporary Argentine Art) examines, precisely, these intersections, which celebrate and at the same time satirize the bonds and the dissociation between these two artistic practices. Based on an idea by Eduardo Médici, artistic director of ArtexArte, Valeria González devoted herself to exploring the intersections between photography and painting.

In effect, the tendency to “fabricate” the photograph has an unusual prominence; it is what is generally known as “photographie plasticienne”, or fine art photography. Very frequently used by artists, it is the photographic genre that crosses over into a range of other visual arts disciplines and participates in the generalized evolution of the different practices. In any case, the manipulation of photography and its convergence with painting is nothing new. The late 19th century saw the emergence of the so­called pictorialist photography which, through special techniques and laboratory effects, attempted to make the photographic image resemble painting and thus obtain the status of art. In fact, retouching has been habitual since the dawn of this discipline, as well as in scenified photographs. Moreover, as it may be seen in the section devoted to Annemarie Heinrich’s studio, in the exhibition featuring her works at the MUNTREF (Museum of the University of Tres de Febrero), already in the 1940s manipulation with oil and special brushes contributed to “improve” skin imperfections, among other things.

The conversation that both disciplines have been holding for quite a long time becomes even more evident in the work of Marcos López. In a turn in his trajectory, the renowned photographer has been printing his pictures for some years now on different supports, and he manipulates them with paint; in this case he used his own picture on a poster of an exhibition by the great American photographer Ansel Adams.

In some images, especially in those that were “mounted” by the artists, the resonance of the past in contemporary artworks is an intentional result. An example of this is La dama (The Lady) by RES (in collaboration with Constanza Piaggio). In this image from the series Conatus, RES altered references and details of Leonardo Da Vinci’s painting The Lady with the Ermine (1488-1490). But instead of the white ermine of the original Lady (here she appears to have six fingers in one of her hands), the lady holds a pig’s head.

Among the works by forty artists, special mention may be made of Juan Becú, Max Gómez Canle, Silvia Gurfein, Esteban Pastorino and Martín Weber. Also noteworthy are Jorge Roiger, featuring photographs that refer to informalist paintings, and Oscar Pintor with Cuadro y planta (Picture and Plant), a remarkable composition in black and white that synthesizes the curatorial proposal.