Born in Colombia, Salcedo has sculpted or created installations as rituals that are both memory and eulogy, ways of rummaging into mute stones to find and to transcribe the voices buried within them. 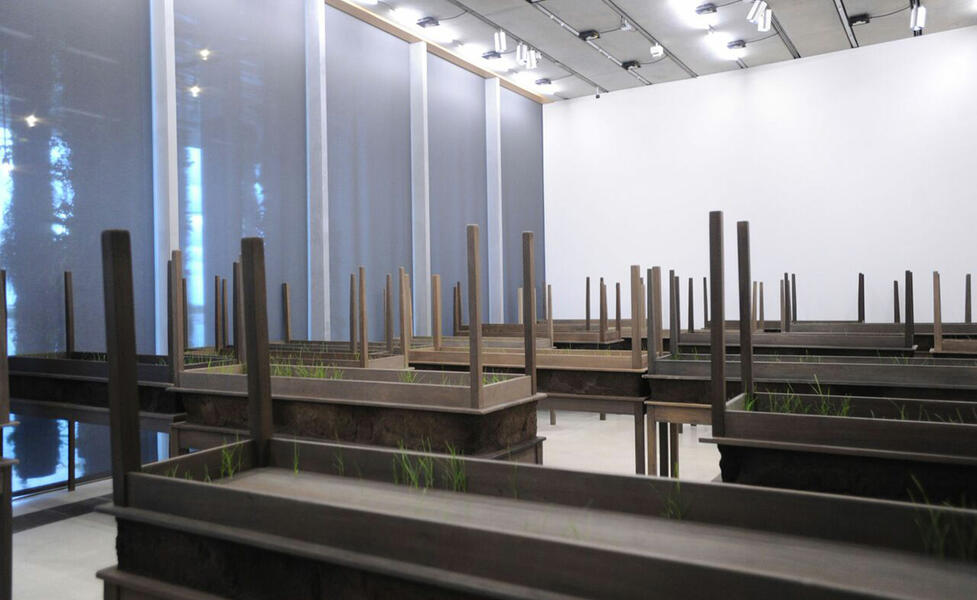 The title of this touring exhibition organized by the Museum of Contemporary Art Chicago—an event that brings together major works by Doris Salcedo (1958, Bogota)—is a made-up word, syllables joined to name the unspeakable or that which—in the midst of that other sea of darkness that is indifference—has been rendered inaudible:  “Unland.” Born in Colombia, Salcedo has sculpted or created installations as rituals that are both memory and eulogy, ways of rummaging into mute stones to find and to transcribe the voices buried within them. Her work draws inspiration from Paul Celán’s poetry written after the Holocaust. Other forms of “total fire”—the words at the root of the word Holocaust—have been experienced by segments of the population of her own country. Her cryptic work encodes the shudders of pain on surfaces as beautiful as they are fragile or boards it up silently with hardened cement amidst home furniture: it foregoes explicit reference and rational discourse for the sake of poetic revelation born where silence sets in.

Her ongoing ritual work in the transference of objects is a powerful yet oblique allusion to violence in Colombia. Chairs and stacks of sheets, shoes enclosed in boxes covered with sutured animal skin, are stand-ins for migrant and wounded or disappeared bodies; the act of dismantling them and then putting them back together is a form of restitution of the lacerated collective memory. That “ruin of flesh and stone” of which Susan Sontag speaks, citing Virginia Woolf on images of the war, makes itself felt in skins made of petals, crochet blankets, pieces of furniture joined with human hair. Salcedo suggests a common wound, but her gesture is an act of healing in different ways. In Disremembered (2014), she evokes the forgotten dead by sewing for them precious silk garments with incrusted needles that pierce our eyes to make us see. In Plegaria Muda [Mute Prayer] (2008–10), green grass buds from soil that has been spread over tables placed one on top of the other and laid out in a row like graves; the grass grows over the course of the exhibition in a powerful reaffirmation of life. By sewing together thousands of rose pedals by hand for the installation A Flor de Piel (2014)—a work whose title in Spanish is literally “flower skin,” but that also makes reference to something felt keenly on the surface—she evokes the delicacy and precision of the collective body of pain in a sewn skin that holds as well the possibility of the memory of beauty. Traces of Joseph Beuys’s aspiration to social sculpture are embodied in works that release, onto the memory of pain, the silent and unstoppable current of creative potential. Where death is imposed, an even greater measure of sublime imagination is placed as counterpart and as act of political liberation. Unland is one of the most beautiful and moving exhibitions ever held at the museum