Scar Cymbals is Huanca’s world developed by means of a fluid dialogue between setting and architecture, sculpture and performance. 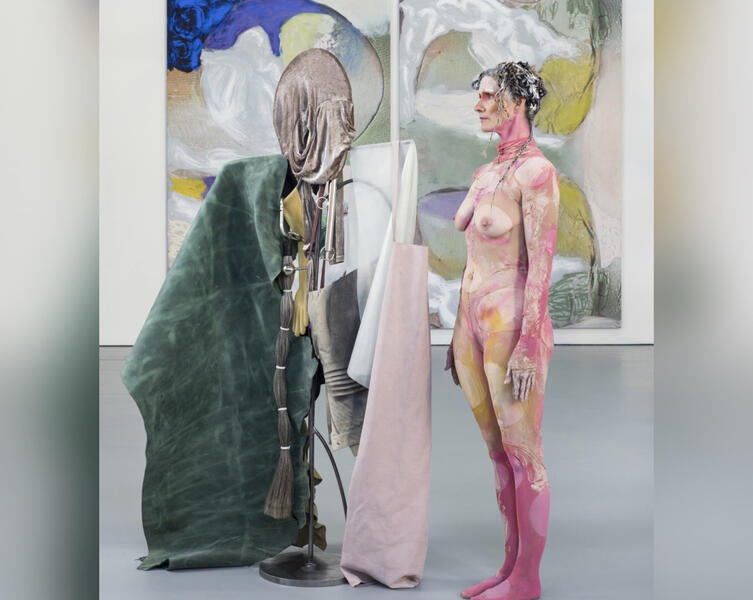 With its combination of open and diaphanous spaces and different structural levels, the nineteenth-century Methodist chapel that houses the British seat of the Zabludowicz Collection is a fascinating environment. It is perfectly suited to any action that requires movements or combinations of architectural elements and installations. For those reasons, it is not only an apt venue for Scar Cymbals, the first exhibition in the United Kingdom of work by Donna Huanca (Chicago, USA, 1980), but also a necessary one insofar as it enables the artist, who is of Bolivian descent, to formulate the synchronization and aesthetic dialogue that her work entails.

Three lines inherent to Huanca’s background come together in her work. Though perhaps never formulated as such, the conflict between those lines has yielded distinctive and groundbreaking work. If put in legal terms, the phrases would be jus soli and jus sanguini, two divergent areas of influence in which Huanca has always existed, the contrasts between her daily life in Chicago and her family trips to her parent’s native Bolivia, where she came into contact with different sorts of folklore, such as the celebrations surrounding the Virgin of Urkupiña. The impact of the radically different led to a certain sense of fantasy or of unreality that makes itself felt in her art. The third line would be the artist’s studies in Germany, which is key to understanding a certain expressive and chromatic bend.

All of that is at play in Scar Cymbals. It is Huanca’s world developed by means of a fluid dialogue between setting and architecture, sculpture and performance. The power of the gesture, of the human body, of identity, and of how we relate to one another are the structuring links in a conversation channeled through nude performers who are covered in paint and makeup, skin rendered sensorial instrument. The performers interact with structures placed in the main gallery, some of which— Melanocytes/Etheric Template, for instance—are architectonic in nature. That transparent composition that presides over the front becomes opaque after each performance due to the chromatic marks left by the bodies. In other cases, the structures are installations; the morphology of the sand spiral in Sensory Neuron/Celestial Layer, for instance, determines the performers’ rituals.

Almost by inertia, a hallway leads to a space in which sound becomes central. The sensorial and powerful whole resulting from the enveloping sound and the body serves to reaffirm the identity of Huanca’s art. In this environment, the viewer receives impacts constantly, whether due to the nature of the sound used in a fantasy-like setting or to the colors and forms produced by materials that prove to be the source of the pigmentations that the performers use. Those sculptural installations, their double idiosyncrasy as process and as result, as well as the importance of sound art—with which Huanca has been working for years—in them bring to a close a journey from which escape is not all that easy. The show is a tireless exploration for the senses. It is somewhat chimerical and yet as real as the bodies and surfaces that make it up and as true as Donna Huanca’s different realities.