For my twentieth and final posting on the Getty-led initiative exploring Latin American and Latino art in dialogue with Los Angeles, we will look at Juan Downey: Radiant Nature, a joint exhibition by Los Angeles Contemporary Exhibitions (LACE) and Pitzer College Art Galleries. The exhibitions brought to life important interactive works by the Chilean-­‐born artist Juan Downey (1940–1993) that have not been seen for generations. Drawing on groundbreaking research, Radiant Nature features recreations of Downey’s electronic sculptures and installations from the late 1960s and documentation of his early, innovative performance pieces. This two-­‐part exhibition opened at Pitzer College in Claremont, CA, on September 9 and at LACE in Los Angeles on September 13. They closed in December of 2017. 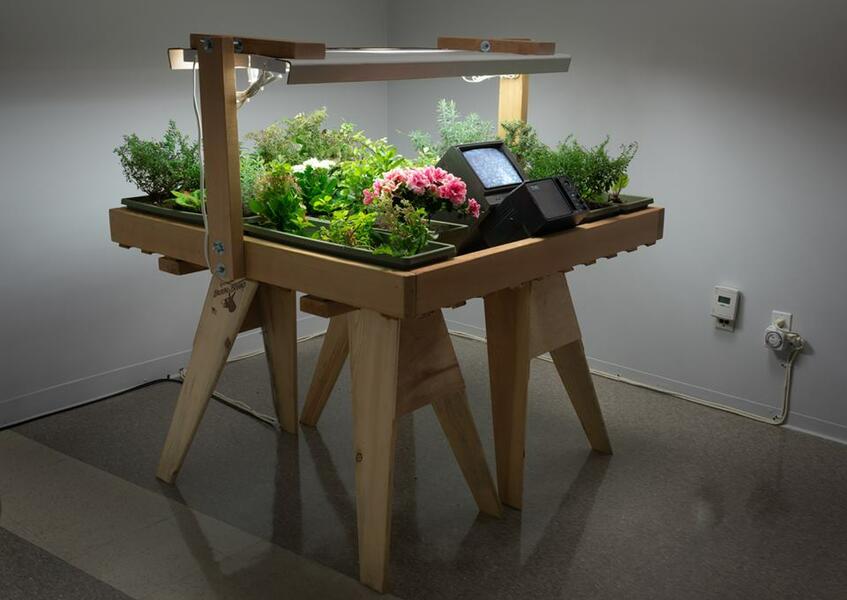 Juan Downey is known primarily for his pioneering video work, however, the two -curators Ciara Ennis, director of Pitzer College Art Galleries, and Robert Crouch, executive and artistic director of Pasadena Arts Council, decided that Radiant Nature would highlight his early experiments with cybernetics and interactivity as played out in three early bodies of work—electronic sculptures, happenings and performance, and progressive environmental installations.

Downey’s interactive art responds to the viewer or performers, whether human or non-‐human. At Pitzer, the Life Cycle: Electric Light + Water + Soil —> Flowers —> Bees—>Honey environmental installation, video records more than 20,000 live bees housed in a portion of the gallery while a monitor simultaneously plays back footage of the bees at work. Converted from Portapak videos, LACE’s documentation of the performance piece Three Way Communication by Light showed performers filming and projecting images of their own faces onto each other. Ennis and Crouch understood that these works were intended to be played with, turning passive onlookers into active participants.

In the introduction to the exhibitions, the curators wrote that Downey was especially interested in the potential of technology to facilitate viewer participation, transform social relations and forge new modes of communication between organic elements or environments and machines or machine systems.

Born in Chile in 1940, Downey settled in New York City, where he developed a practice that included sculpture, performance, installation and video. In the 1970s, he became known for his multi-­‐channel video works such as Video Trans Americas (1973–76) and The Thinking Eye (1974-­‐1989), which critique Eurocentric views of Latin American identity. With support from the Getty Foundation, Ennis and Crouch spent three years researching his earlier, often ephemeral works that pre-­date Video Trans Americas.

In conjunction with the exhibition, a symposium explored the relationship between cybernetics and aesthetics and the ways in which they illuminate Downey’s progressive ideas in his electronic sculptures, performances and installations while reflecting on their continued resonance to contemporary practice.

Pacific Standard Time: LA/LA opened in September 2017 and will close in February 2018. I have been posting since March on a series of museums that have been part of an unforgettable exhibition project. I am so pleased to have been part of this journey, one that will have an enduring effect on future scholarship of Latin American, Latino, and Chicano art. I hope viewers like you have also enjoyed reading about this creative undertaking. Thank you.