A few hours after the closing of the 37th International Contemporary Art Fair,  the commercial balance of ARCOmadrid 2018 has been qualified by the participating galleries as very positive. 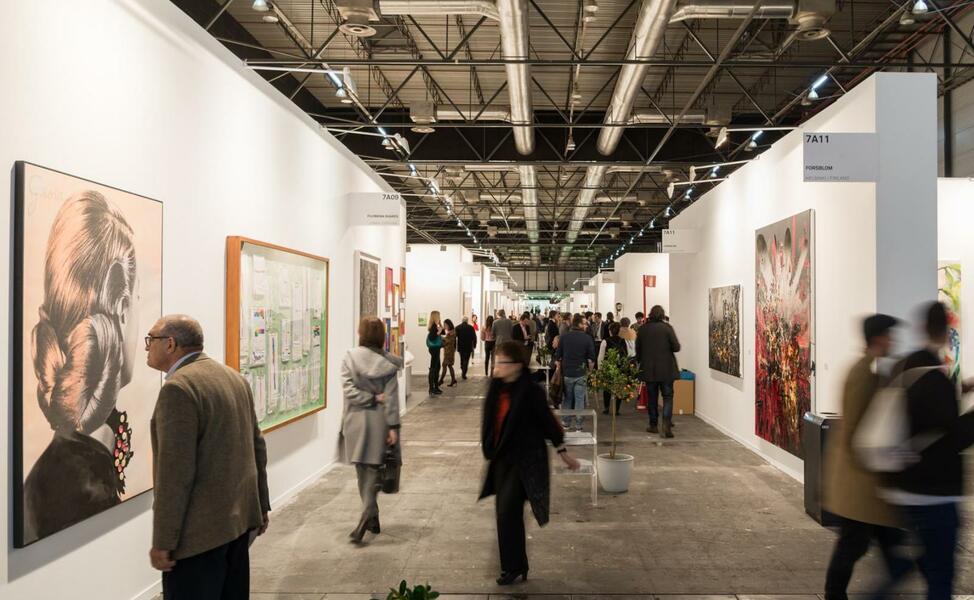 In total, 208 galleries from 29 countries (160 galleries in the General Program) participated, with a high-level artistic and programmatic commitment, aimed at a market that is beginning to consolidate its confidence. So, what has been what has been a generalized trend on the part of the galleries, which have opted for recognized authors and a careful selection of works that have aroused the interest of collectors.

In this sense, the work of the Organizing Committee, integrated by national and international galleries, has placed its focus in a special way on the quality of the contents, in an edition that has seen the level of the participating galleries increase, with the return of Grandes names of international galleries such as Alexander and Bonin and Team, from New York, and Thaddaeus Ropac, from Paris; new additions such as Guido W. Baudach; König Galerie; Monitor and Van Doren Waxter, and other names that do maintain it in an ARCO like Barbara Thumm; Chantal Crousel; Hauser & Wirth or Michel Rein, among others of international importance.

The Fair has gathered in its first days (21 and 22 February) 30,000 professionals, highlighting a significant presence of national and foreign collectors. Only through the programs of International Buyers and Special Guests, organized by ARCOmadrid, have visited the Fair 300 collectors and 200 professionals from more than 40 countries, expanding the spectrum with new names that have aroused the interest of gallerists.

Also, from Friday 23 and until today, the Fair closes its doors, it has maintained a constant audience attendance. In total, and in the absence of final data, ARCOmdrid 2018 will have reached the figure of 100,000 attendees. For them also the Fair has launched as a novelty the initiative, has been directed to purchases and a new collection, whose identification label has presided over a wide selection of works under 5,000 euros, which have been well received. An initiative in favor of the purchase of works for the Fair, First Collectors of the Banco Santander Foundation and the Young Collectors program with an invitation to a collection of young international collectors.

Generalized has been the very positive assessment of the Fair, especially for the quality of the groups and the volume of sales at ARCOmadrid. In this line, from the gallery Pedro Cera said that "it has been a spectacular year, for us the best for the good sales pace from the first moment, and the collectors program has allowed us to make contact with many that we did not know, especially foreigners. " In the same line, Thaddaeus Ropac say that "we are very happy and have sold a lot, the days dedicated to professionals have worked very well", as in magical races that comment that "this edition has gone very well. Every day, in addition, we especially value the collectors' breakfast on Wednesday for the level of the attendees. "

For his part, Estrany-de la Mota shows "satisfied with the volume of sales, we have sold the work of all our artists". From the Bortolami Gallery, participant in the highlighted Future section "the good reception of the novel program and the affluence of professionals, we are very happy with the sales".

Among the institutional and corporate purchases confirmed in this edition of ARCOmadrid are those acquired by the ARCO Foundation, for a value of 175,000 euros, paid with funds from the collection of the ARCO Foundation Dinner, sponsored by La Galería de Canalejas, held at the Teatro Real on Tuesday, February 20, on the occasion of the'A` Awards for Collecting. The acquired works, with the assistance of Miguel von Hafe and Manuel Segade, correspond to 7 artists from 7 participating galleries in the 37th edition of the International Contemporary Art Fair, ARCOmadrid: Amalia Pica -König Galerie-; Armando Andrade Tudela -Fortes, d'Aloia & Gabriel-; Laure Prouvost -Carlier Gebauer-; Lily Renaud Dewar -Emanuel Layr-; Yorgos Sapountzis -Barbara Gross-; Francesc Ruiz -Estrany-de la Mota-, and Eva Fábregas -Tenderpixel-, who will become part of the Fundación ARCO Collection, hosted at CA2M Centro de Arte Dos de Mayo of the Community of Madrid.

As is already traditional, the Reina Sofía National Art Center Museum has also acquired works at ARCOmadrid. This time, there have been a total of 23 works by artists such as Rosa Barba, Patricia Esquivias, David Bestué, María Ruido, Inmaculada Salinas, Algirdas Seskus, Joachim Koester, Ángels Ribé and Engel Leonardo, for a value of 224,480 euros.

The Helga de Alvear Foundation has acquired the piece 'Pavilion for showing rock', by the artist Dan Graham, valued at 500,000 dollars, in Hauser & Wirth, as well as the work of Carlos Bunga -Alexander and Bonin-, and Chema Madoz -Elvira González- . Also the María Cristina Masaveu Peterson Foundation has bought at the fair as the works of the Portuguese Pedro Cabrita Reis -Juana de Aizpuru-.

Some of the works sold include those registered by the Mayoral gallery, which has sold, among others, a Luis Feito entitled '256 B' for 30,000 euros. In Leandro Navarro, Baltasar Lobo's sculpture, 'Mére et enfant', has been acquired, which has reached a price of 330,000 euros. For its part, the gallery Helga de Alvear has also sold pieces such as 'The revolution will be feminine', Marcel Dzama for 44,610 euros. In Leon Tovar, the piece 'Escritura Verde Superior' by Jesús Rafael Soto has been sold for more than 800,000 euros, while the Maruani Mercier gallery has reached prices of up to 150,000 euros for works by Peter Halley or Maurizio Cattelan. Elba Benítez from Madrid has sold, among others, photographs by Ibon Aranberri, and the Parisian Michel Rein, an installation by the Chilean Enrique Ramirez for 25,000 euros. The Marlborough gallery has sold two works by Antonio López for 315,000 and 90,000 euros.

Private companies of national and international scope are added to the initiatives for the impulse of the acquisitions and the recognition of the artistic creation, through the delivery of different prizes. This is the case of the ARCO Community of Madrid Award, which this year has been awarded to artists Alex Reynolds (Bilbao, 1978), Cristina Garrido (Madrid, 1986), Teresa Solar (Madrid, 1985) and Elena Alonso (Madrid, 1981), all of them from the same generation and, from different languages, address crucial issues in the definition of contemporary art.

The ARCO BEEP Electronic Art Award went to the artist Eugenio Ampudia with the work'Try Not To Think So Much '(2018), an installation in which he uses circuits and technologies. Asunción Molinos Gordo has been the winner of the Solán de Cabras Art Prize with her piece Ócultamiento, Falsa Escasez or Escadaz Fingida', a wooden sculpture painted by hand that represents a bulk carrier ship. The NH Collection of Contemporary Art Award has recognized the French artist Jean-Pascal Flavien, from the gallery Esther Schipper, for his work 'Model / Mask 5' (2017). The Catalina d'Anglade Art Prize has awarded Secundino Hernández with the purchase of her work "Without Title, 2017" and the launch of an unprecedented project that will unite art and design. For his part, the Brazilian Marcelo Cidade, with his experimental and claiming piece'Expansão por Subtrasão', has been the winner of the illy SustainArt Prize. The work 'The Flying Dutchman', by Kiko Pérez, was the winner of the Alhambra Cervezas de Arte Emergente Award. The Art Situacions Prize went to the Navarrese artist Carlos Irijalba and his work'Walls 2'. In addition, on the occasion of the upcoming participation of Peru as the guest country of ARCOmadrid 2019, the first Han Nefkens Foundation Award - ARCOmadrid has been awarded to artist Maya Watanabe, who will receive the necessary funding to carry out her video art project for one year.