Curated by Michelle White, this focused presentation of paintings from the late 1960s through the early 1970s is the first solo museum exhibition of the work of Virginia Jaramillo. Characterized by razor-thin undulating lines that dance across monochrome fields of bright and flat color—oxblood, saturated greens, and deep purples—the paintings situate the artist within the most important developments taking place in American abstraction at the time. 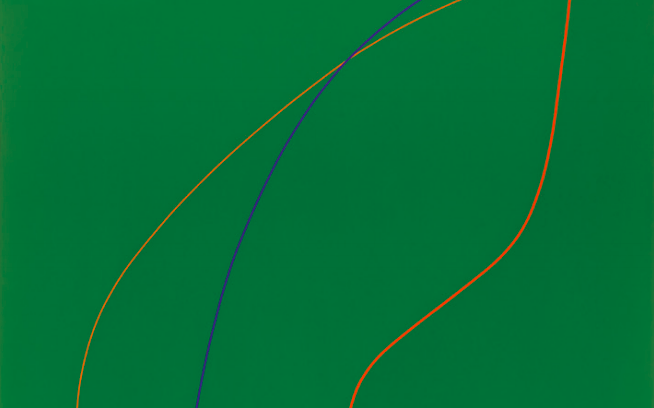 According to Jaramillo, these Curvilinear Paintings are spatial terrains that invite reflection and intend to translate “the structure of our physical, spiritual, and mental worlds” into the space and geometry of art. “I lay out the groundwork and the viewer projects onto the space” to fill the “arena with their own feelings and experiences,” the artist has remarked.

Jaramillo custom mixed her acrylic pigments to create the vivid and bright hues that play with the viewer’s understanding of light, space, and depth. When the curving and slender lines cross these solid and smooth fields of color, there is a dramatic shift in scale that provides a sense of disorientation. Both on and in the monochrome passages, they also eschew a clear distinction between the color and the forms and between the foreground and the background. The lines are interwoven with the palette to create the composition. These works were indeed a breakthrough for the artist. They set the stage for her career-long approach to experimentation with the vocabulary of form, line, and color, which continues to inform her most recent work.

Beginning in the late 1960s, Jaramillo and her contemporaries took what has been described as a cool and minimal approach to painting. These bold works, defined with descriptive terms such as “post-painterly,” “hard-edge,” and “non-gestural,” essentially mark a break from previous painting traditions. Artists such as Jackson Pollock and Willem de Kooning, who were affiliated with Abstract Expressionism, were interested in the gestural potential of paint and believed that splatters and drips and the indication of a body pushing a brush or flinging pigment across a canvas revealed the inner psyche of an artist. In contrast, Jaramillo and others questioned this exuberant approach to mark-making and invented ways to eliminate entirely the indication of a brush or the hand of the artist. For example, graphic contours and precise and neat modes of paint application—intended to be expressionless—were some of the techniques artists were turning towards as a means to emphasize the viewer’s physical or optical experience of the work of art, rather than the subjectivity of an individual artist. Jaramillo, for example, wanted to reduce art to its most essential components and asked: how can I elicit a powerful response from the viewer through the intersection of just a few colors and one or two lines?

Born in El Paso, Texas, Virginia Jaramillo spent her formative years in California before moving to Europe and settling in New York City in late 1960s. Central to a career spanning nearly six decades is Jaramillo’s drive to express materially our sensory perceptions of space and time in what she describes as “an aesthetic investigation which seeks to translate into visual terms the mental structural patterns we all superimpose on our world.” Whether creating bold abstract paintings, sculptural mixed media compositions or meticulously formed handmade paper works, Jaramillo has forged a unique voice, experimenting with material and process to pursue her ongoing explorations of human perception of reality.

Taking their inspiration from Jaramillo’s rich and varied experiences and influences, the intensely worked textures, colours and forms which shape Jaramillo’s paintings emerge from sources that span history and cross cultures. These include contemporary fields such as science fiction and modernist industrial design (during high school, Jaramillo and a selected group of other students would make weekly visits to the celebrated designer Charles Eames’s studio) as well as Celtic and Greek mythologies, pre-Hispanic and non-Western systems of spatial organisation, and classical and sacred geometry. Each of these sources represents structures, conceived by individuals and societies, in order to organise our sensed experiences of the physical, spiritual and mental worlds. Underlying Jaramillo’s works is a powerful sense of geometry, an understanding of space and surface and the organisation of the world around us. This geometry is combined with a strong aesthetic engagement with material. Throughout her career, Jaramillo has relentlessly innovated with new processes: manipulating found materials, experimenting with earth pigments, creating texture and depth in the painted surface.

The Menil’s presentation of Virginia Jaramillo’s Curvilinear Paintings is timed to celebrate the 50th anniversary of The De Luxe Show, one of the first racially integrated exhibitions of contemporary art held in the United States. The trailblazing exhibition, curated by Peter Bradley, included works by Sam Gilliam, Al Loving, Kenneth Noland, Jules Olitski, and others who were exploring new approaches to “hard-edge abstraction.” Jaramillo was the only woman included and exhibited the painting Green Dawn, 1970, which is featured again in this exhibition. The exhibition is presented in association with the Feminist Art Coalition.