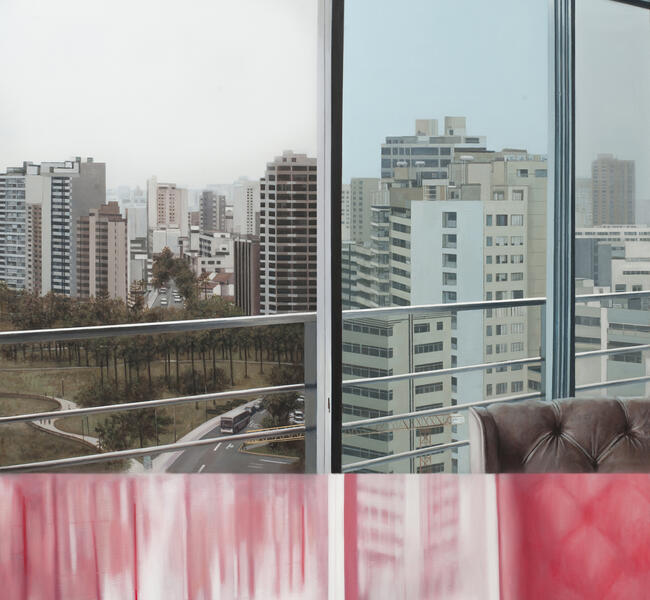 Almost from its beginnings, more than twenty years ago, the appropriation of the photographic image is fundamental for the painting of Zelada, as much in the composition as in the conceptual. In the case of the present series is crucial because the picture arises from the conjugation of two images of the various photographic: usually from the view of an urban scene and the portrait of a subject placed as a passerby the first. In that friction or subtle dislocation - flat may be a European figure located in a panoramic of Lima - lies the appeal of the proposal. On his process of realization of the express artist: ... In reviewing my photographic archives he found that the images that were discarded once offered me new possibilities of use; A renewed and unique visual power. (...) The look at the city and a world of the whole world acquires another sense when it is inserted protagonists whose context is alien and that are integrated to the environment in an unnatural way but with some logic. (...) In these paintings the human being is portrayed in a constant attitude of pose, cliché and apparent distress ....

JEAN PAUL ZELADA (Trujillo, 1972).
He studied Painting at the Fine Arts School of Macedonia in the Tower of his native city between 1989 and 1993. He has opened eight individual exhibitions in Lima, Trujillo and Brussels (Belgium). Since 1994 he has participated in collective exhibitions in Colombia, Mexico, the United States, Canada, Spain, Germany, Belgium, Morocco, Algeria and China. He won the First Prize of the National Contest New Artists Banco de Credito (1994), the Third Prize of the Third National Contest of Painting Jhonnie Walker (1997), the Second Prize of the Ninth National Exhibition of Painting Coca Cola de Trujillo (2001) Mitchell National Painting Competition, Arequipa (2005), Latin Union Award for Young Creation in Peru (2007), First Prize of the Video Babel Festival, Cusco (2011) and Second Prize of the Fourth National Painting Contest of the Bank Central Reservation. (2012). He has participated in all the editions of Parc Feria Internacional de Arte, Lima, Peru, represented by LA GALERÍA.