The MAMBA continues with its cycle of contents that take as a trigger the work of a contemporary artist to reflect on the current context and the future. 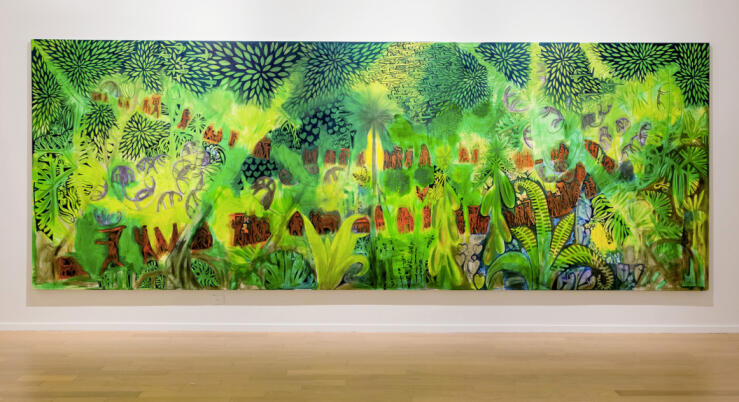 This week's topic is Intertwined. The planet as a unique organism. La boca del infierno (Hell’s mouth), by Florencia Bohtlingk, is the work that inspires educational, artistic content and special productions for the most diverse audiences with which the Museum dialogues.

“Since 1992, Florencia Bohtlingk has been moving to the La Flor neighborhood every year to metabolize herself in the bowels of the Misiones jungle. There, she followed the movement of settlers of various nationalities; human bodies that come from inside the jungle to settle in new areas of the same soil. La boca del Infierno (2019) is the pictorial testimony of that movement, a work that teaches us that in the lushness of the forest absolutely everything is life and that all that life is immersed in the same movement. Each being revolves around another, like the dance of a single body made up of thousands of organisms. Within this complex ecosystem, the transhumant wave has the red color of the earth, adopts the meandering form of the river or mixes with the families of parrots, monkeys and plants. Upon entering the tangled green of the mountain, where everything overlaps and intersects, there are no hierarchies between the figure and the background, only scales from which it is possible to focus. The immense painting warns us that the jungle is not viewed from the outside, but is experienced from the inside, with a body that is part of another larger body, changing and formed by interdependent organs: sometimes too abstract, sometimes confusing, at times in high definition and by others, again camouflaged.

The work we chose to open this week displays, at the same time and as a single universe, the pertinent symbiosis between the social and the natural. If there is something we can learn –or remember– from the crisis of the new coronavirus, it is that our skin is perhaps more porous, vast and permeable than we thought. Today more than ever we can clearly understand that the earth is an organism of interdependencies and that the interspecies movement of viruses, the power of their mutations and their aggressiveness are directly related to climate collapse, resource depletion, agribusiness and all man-made natural imbalances of this era. If we thought of the atmosphere as the last skin of a single organism hatched by interdependencies, we would change our gaze and we could begin to understand that the human being is acting as a virus within that body, which raises the temperature of the earth as if it was a fever, which burns the Amazon as if it made its lungs collapse. The war metaphors of the invisible enemy, which limit the threat to that of an external aggressor, evade a fundamental question such as the socio-environmental causes of the man-made pandemic. If we thought that we were the enemy, all this time, ourselves, could we perhaps improve our future on the planet?

This week, from the Modern Museum we propose to think of the human being without separating it from nature: in the network of species in which we are immersed and in the need to think of ourselves as an interdependent organism. These days, many of us saw through the networks a couple of condors discussing with a trio of poodles from the windows of a skyscraper, how the guanacos walk along the beaches of Puerto Pirámides or a family of coipos takes the station from Tigre, how the swamp deer moves stealthily through an abandoned recess of the Capitán river and a huge monarch butterfly enter a PH in Almagro and break into a teleconference. In recent weeks we have been witnessing two faces of this quarantine: while the human beings of the world stay in our homes, nature is revitalized. We can be amazed both by the speed with which certain wild species recover, and by how transparent the evil we caused them by devastating ecosystems became. What is coexistence like today and what are the ethical, legal and biological limits between wildlife and human civilization, between non-human animals and humans? Could we take advantage of the pandemic to design new ways of being together” - Javier Villa, Senior Curator