In the framework of the 16th Documentary Film Festival of Madrid (better known as DocumentaMadrid) that took place from 9 to 19 of May; until June 30 at the Matadero Madrid, an individual exhibition of the Catalan artist and filmmaker Carlos Casas (1974, Barcelona) is on display. Being the first retrospective of Casas in Spain, the exhibition takes a tour through the prolific work of the Barcelona filmmaker who fuses documentary and contemporary cinema with pieces of sound and performative art. 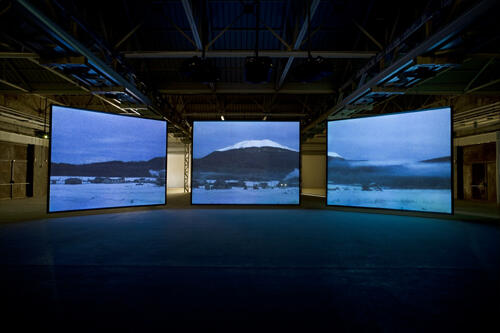 The exhibition of Casas is not only the result of the DocumentaMadrid 16th edition, but he was also selected by the visual arts department of Matadero Madrid to star in the Profundidad de Campo (Depth of Field) program that is held each year.

From a series of projections of "extreme and forgotten" landscapes of the planet, Casas shows the untouchable wealth of those geographies that he has been recording for more than twenty years. It is in these pieces that the device oscillates between the fields of documentary cinema, the visual arts and ethnography, united by a common element that is the camera and its intention to optically inhabit these spaces.

With the focus on the tangible, plastic, and human aspects of the landscape, the artworks projected in the Nave 0 of Matadero Madrid are intervened with sound recordings of nature and musical notes that overlap, illustrating the environmental conditions of these spaces. Through this masterful montage -the differential aspect of film production-, sound and image become an original alphabet that Casas uses to indicate and approximate these horizons to the viewer, overcoming the conventional forms of audiovisual language.

Among the works exhibited can be seen the End Trilogy [Final Trilogy], a documentary project in which Casas carries out a quasi-ethnographic work to illustrate the constant battle of the communities that inhabit these hostile geographies. Constituted by three feature films made between 2002 and 2008, the three titles that make this project -Solitude at the End of the World  [2002-2005], Aral. Fishing in an Invisible Sea [2004] and Hunters since the Beginning of Time [2008]-, represent customs and ways of life in danger of extinction, and that in these times would seem to require a justification (such is the case of hunters of whales in the Bering Sea).

As against the cover, a series of experimental works are also projected. The so-called Fieldworks are audiovisual pieces composed of archival material, images and radio frequencies registered in specific places. What makes these pieces a feature of Casas' work is that subtle combination of music and images, always very successful in its editing process.

Ultimately, his Recent Fieldworks are also exhibited. Something like the latest audio-visual notes of an active artist. This group includes projects such as Turin [2012], Vucca [2017], Faro [2017] and the unfinished Azan Series [2012-2019]. These last productions respond to Casas' most recent interests with symbolism and semiotics.