ART AND SUSTAINABILITY- OLAFUR ELIASSON: SOMETIMES THE RIVER IS THE BRIDGE

Curated by Yuko Hasegawa, this exhibition will take place until Septermber 27 in the Museum of Contemporary Art Tokyo. The title of the exhibition, Sometimes the river is the bridge, suggests the possibility of bestowing form and function onto formless things—like invisible rivers that may appear to be bridges with a particular form and function, when viewed from a different, alternative perspective. 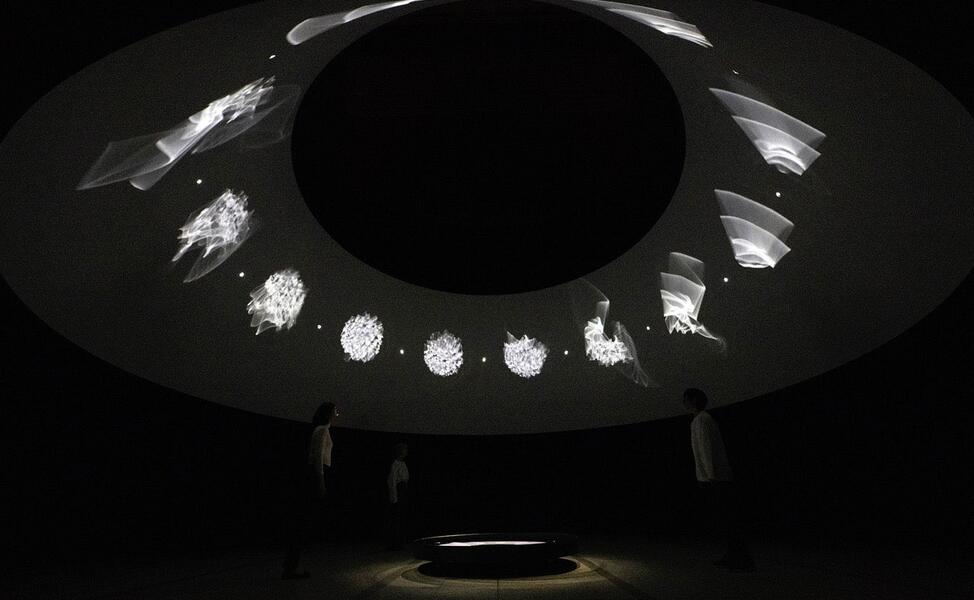 This exhibition takes its point of departure from Eliasson’s interest in the environment, as reflected in how he has voiced his opinions at the United Nations as well as through projects like Little Sun (2012–) and Ice Watch (2014–). It is the result of a two-year dialogue with curator Yuko Hasegawa, partially in relation to the tsunami that occurred in the Tohoku region of Japan in 2011. Eliasson, who is known for his work with water, fog, light, and other natural phenomena, deploys a unique artistic language that gives form to intangible and richly varied materials. In this exhibition, his specific intention was to shift the focus to the viewer’s ecological awareness: in other words, to imbue the perceptual experience with a different meaning or realization.

What is unique here is not just the theme of the exhibition: the sustainability theme is also reflected in how it was produced. Consciousness of the carbon footprint associated with the act of staging the exhibition was manifested in how transportation was minimized by increasing the number of components that were locally produced, the choice of the means of transportation, and the use of renewable energy in the exhibition itself. Works were transported from Berlin to Tokyo not by air, but by train and boat via the Trans-Siberian Railway. 12 new drawings from a series called Memories from the critical zone (Germany–Poland–Russia–China–Japan, nos. 1–12) were automatically executed by a drawing machine as a result of the vibrations during the journey.

In addition, the light sculptures are powered by solar panels, becoming a statement about how the future should not just be waited for, but actively embraced and welcomed. As Eliasson himself says, “for me, all of these works articulate and express the future.”

The highlight of this exhibition is a new large-scale installation in the 20-meter long atrium space, called Sometimes the river is the bridge. A basin of water is placed in the center of the darkened space, while the reflections of twelve lights illuminating the surface of the water create various shadows on the circular screen wall above. The ripples caused by the gentle stirrings of the water surface take on a variety of forms, inviting the viewer to partake in a state of deep contemplation that resonates with these water ripples. This is not just an individual sensory experience, but also a medium for empathy with others who share the same space. Eliasson’s work takes into account the neo-materialist discursive nature of things: through the material structure of his work, he explores ways of creating a space of empathy that is accompanied by thought. In a certain sense, this particular work might be said to have achieved this goal.

In other works, such as photographs that capture the changes in Iceland’s glaciers over a period of 20 years, or documents of an intervention that causes a river to appear within a city, Eliasson deploys methods that promote awareness and knowledge production through form and space by understanding the structures external to our living spaces, such as architecture and landscapes, as elements of nature and climate. These methods are, too, integrated into the theme of sustainability, welcoming many visitors as an exhibition that entails “feeling and thinking.”

On this matter, Eliasson stated: “A work of art embodies a set of values and ideas. It reflects the artist’s convictions – about sustainability and the climate, for instance. I think there has to be synchronicity between what art is about and how art is made. For me, today, this means working with my studio to change how my artworks are produced, shipped, and shared… All human activities have a carbon footprint. Individuals, however, can only do so much. Governments and the international community need to get ambitious about climate action now. But to make this happen, we all need to be active in our own fields and at all possible levels. Now is the time to act on behalf of the planet.”

Olafur Eliasson was born in 1967 in Copenhagen, Denmark, and is currently based in Berlin and Copenhagen. After a childhood spent in Iceland and Denmark, Eliasson studied at the Royal Danish Academy of Fine Arts from 1989 until 1995. In 1995, he moved to Berlin and founded Studio Olafur Eliasson, which consists of a large team, including craftspeople, architects, researchers, cooks, and art historians. In 2014, Eliasson and architect Sebastian Behmann founded Studio Other Spaces, an office for art and architecture.

Eliasson often uses natural phenomena and is internationally renowned for works like “The weather project” (2003), installed in the Turbine Hall at Tate Modern, London, or his public art project “The New York City Waterfalls” (2008), for which he installed four artificial waterfalls along the East River and on Governors Island, New York, US.