The Peruvian photographer Roberto Huarcaya (Lima, 1959) is one of the artists who uses the camera as a cogitative and analytic instrument, capturing and exposing reality in such a way that it leads us to discover aspects of this reality which we generally do not notice. Dina Mitrani Gallery presented Huarcaya’s first solo show in Miami, composed of a collection of photographs never shown before in the United States, which had been previously exhibited in Paris during the Mois de la Foto 2010, and which are part of two different series: one of them recreates iconic Renaissance works using models and environments characteristic of Peru, and the other is comprised of large-scale, panoramic seascapes. 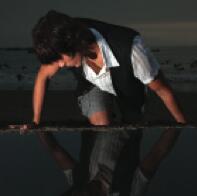 The first series goes beyond the apparent play of art with art and the stylistic regressions that Postmodernism rendered popular some twenty years ago, harshly criticized by Frederic Jameson as an expression of a “schizophrenic conscience”. Huarcaya reinvents these classic works belonging to the European visual culture with the apparent intention of downplaying those supposedly eternal and absolute cultural values, reincarnating its compositions but replacing the pictorial aura with photographic reproduction, and the original French, Italian, or Dutch characters with real persons whose ethnic origin places them nearer to the Andes than to the Caucasus. However, far from being grotesque or derisive, the images are endowed with a strange plastic beauty that potentiates even further the strength of the socio-cultural reflection implicit in them. In the case of some exquisitely mounted scenes, such as the one featuring Frecia and Samy, from Iquitos, representing Gabrielle D’Estrees et sa soeur, the instantaneous identification of the original work is followed by a sort of ludic surprise at the substitution of the pink French nipples with the dark and bountiful Peruvian nipples; a domestic scene takes place in a tropical courtyard in the background, in a strong contrast with the elegant curtains that frame the scene. For his part, the young man from Chorrillos who personifies Caravaggio’s Narcissus, successfully emulates the subtleties of the atmospheres and chiaoscuros of tenebrist painting, and the Jendy Gioconda, an inhabitant of Puno, wears a traditional blouse with its front in vibrant colors that float against the background of twilight half-tones, while they connect the model’s copper-colored hands and face as if they were a bridge.

The seascapes’ gigantic scale and atmosphere entail reflections of a more philosophical nature: in them one may even hear the roar of the Pacific Ocean and the murmur of its metaphors: a full moon that the undertow left upon the sand; the sailing boat stranded on the beach, and the private and public beaches divided by a visible line and a visible contrast seem to be a synedoche for a planet.that expresses its malaise through codes that are not so secret.