Painter Rafael Soriano (Cuba, 1920) is not only one of the pioneers of abstract art in the Caribbean island; he is also one of the most original abstract artists in the American continent, as a result of the extremely sui generis style he began to develop in his work since the mid-1970s, characterized by diaphanous forms and ethereal chromatic atmospheres that appear to be illuminated from within or to shine with a self-generated light, although the human presence is a constant that creates a balance between the immaterial and the physical through frequent anthropomorphic allusions − whether visual or verbal − in his titles. The University of Miami Lowe Art Museum pays tribute to the master and his fruitful career through the exhibition Rafael Soriano: Other Worlds Within; a retrospective curated by Jesús Rosado that spans sixty years of creation represented by 75 works (paintings, drawings and ceramics) from the peri- od between 1940 and 2000, which have been loaned by several private, corporate and public collections. The show opened on 28 January with the lecture Rafael Soriano: Some Thoughts on His Painting, delivered by Dr. Alejandro Anreus, and it will be open to the public until 27 March, 2011, when it will close with the screening of The depth of silence, a documentary film by Jorge Moya. 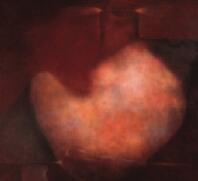 The show is chronologically structured following a museo- graphic design, which allows the viewer to appreciate the evolution of Soriano’s work in his extensive journey throughout the abstract territory, from his first incursions into this pictorial language in the early 1940s (marked by a surrealist influence which was also conspicuous in the production of other important Latin American masters such as Mata, Lam and Carreño), through a purely geometric stage à la Mondrian in the 1950s, which would gradually shift towards less hard-edged and planimetric shapes in the 1960s, at the beginning of his exile in Miami, later to reach that very personal visual formulation, the result of a constant process of introspective creation rather than of the attentive observation of the artistic trends that prevailed in each of his six decades of aesthetic exercise.

Although dissimilar from the point of view of style, I perceive a strong connection between the work of Soriano and that of his Chinese contemporary and French resident Zao Wou-Ki, given the ability they both possess to embody in their respective visions the breath of the universe or the divine essence of the cosmic, as expressed by the ancient Rosicrucian mystic tradition in which the Cuban artist was initiated in his youth, and as the curator Jesús Rosado informs us in his substantial essay for the catalogue, which accompanies two other enlightening texts by Paula Harper y Alejandro Anreus: “...mystical representation is merely a mental recreation of the cosmic principle of creation oriented towards transcending the conventional notions of time, space, linear causality and other domestic recordings of reality. That ludic exchange between psyche, art and oneiric immersion marks Soriano’s energy in the most prolific cycle of his production.” We have before us an exceptional chance to appreciate and celebrate the work of one of the great Latin American masters from the Modernist period who still breathes with us on this earthly plane, a creation that is a legacy of beauty and spirituality, or a possible inspiration for human growth towards other space/time planes.