New Work Miami 2010, “was conceived as an exuberant salute to Miami’s artistic community, and it will provide a partial snapshot of the Miami art scene at this moment,” according to the press release issued by the Miami Art Museum to promote the exhibit. I highlight the term partial because it is the key word in the sentence, and we are aware of the fact that every selection is partial, but this is even more so when it is not intended to be a survey and is satisfied with being a snapshot; a very convenient approach if the aim is to include only those who are nearby at the moment of pressing the camera’s shutter release button, which will result in a perfect family photograph. 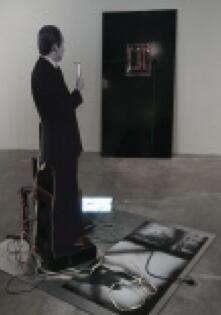 Fabián Peña occupies three walls of a booth with an installation drawing collage in which he has used the bodies and wings of flies, featuring a reflection on life and death which would allude, in a first level of interpretation, to the laborious execution pro- cess of the on-site work. Guerra de la Paz’s soft sculpture perfectly parodies a Greco Latin torso that appears to be carved in pink marble although it is really made from used clothes. Lastly, Manny Prieres’s two-dimensional work, overflowing with potent images and symbols, poetically evokes the conflicts and tensions emanating from the current state of global culture.