The recently inaugurated O. Ascanio Gallery, Miami, presented the solo show “Nanín: Recent Works”, featuring the work of this Venezuelan artist who studied art at the École de Champertier, Paris (1978-1981) and architecture at the Central University of Venezuela, and who was also a disciple of Carlos Cruz Diez for 13 years. His work has been shown extensively in France and throughout Latin America, in venues such as Espacio Meyer Zafra, Graphic Art Gallery, Paris, and Durant & Diego, Caracas. 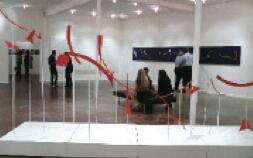 Nanín’s proposal is, above all, a poetics that reinvents the modernist language of geometric and concrete abstraction, taking its essential referents and signs to a contemporary plane when he interacts with the gallery space and transforms it into a great installation by inscribing on its walls hypothetical phrases built with signs that are as personal, abstract and enigmatic as the signs drawn at dawn in wheat fields, allegedly through extrater- restrial action. This clever museographic conception of the artistic deed is probably related to the artist’s curatorial experience, having curated important exhibitions for the Jesús Soto Museum of Modern Art in Ciudad Bolívar (1992), the Museum of Contemporary Art, Caracas (1999), and the First Bigott Popular Art Salon at the Centro de Arte Maracaibo in 2006.

Nanín’s work has been inspired by geometric and mathematical principles on which he bases his concept of a hybrid language expressed through symmetries and asymmetries, repetition and change. Color is another main codification element in the structure of his visual semantics, contributing harmony and consistency to the whole series. Nanín’s signs, however, form part of a grammar that is much indebted to his studies of architecture and to a musical vocation which he also followed for some time; hence that his capricious geometric forms may refer the viewer both to the graphic representations of architectonic language and to the signs used in musical notation. Nanín’s work creates a visual continuum comprised of harmonious openwork forms in aluminum and polychrome PVC, whose colors and shapes gradually weave a visual discourse which, at times, arouses in us the same feeling as the one we experience when faced with a text written in an Oriental alphabet: our eyes take pleasure in the traits of the incomprehensible signs, as if we were in the presence of a more than communicative aesthetic deed. In this case, we can clearly read those phrases inscribed in the language of the gods of beauty.