Iván Puig was born in 1977 in Guadalajara, the same city where the seminal Mexican master, Dr Atl, had come into this world 102 years earlier, and he abides by artistic concepts that tend to revolutionize creative visual praxis in the 21st century, just like Mr. Gerardo Murillo did in Mexican visual arts at the beginning of the 20th century. Throughout the month of April, Kunsthaus Miami presented this artist’s exhibition, Homo- nymos, which highlighted the similarities that exist between these two artists “at different levels, whether they be physical, psychological or related to a particular state of mind, behavious, wishes, common objects and actions...” In this first solo show in the United States, Puig featured a large format wall installation that totally occupied the back of the exhibition hall, and around it revolved the rest of the two dimensional pieces exhibited, mainly photographic documentation of other installations or site specific works 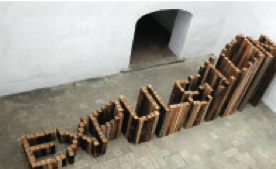 The installation Parallantos was initially conceived as a site- specific project for the ARTBO Fair in Bogota, Colombia, in October 2009; it was made up of black umbrellas perpendicu- larly fixed to the wall, which opened and closed every 13 min- utes, the average time interval between homicides in Mexico and Colombia, according to official statistics in 2008 the Colombian Institute of Forensic Medicine reported 15,250 homicides, while that same year in Mexico, the National System of Public Security admitted the existence of 25,129 homicides. The work was imbued with the playful character that identifies the whole of Puig ́s oeuvre but, paradoxically, it wove a gloomy allegory directed at highlighting and denouncing the ominous social violence that dominates both countries.

The photographs Jaque 1 and Jaque 2 (2010) were produced in collaboration with Hugo Martínez, for an exhibition dedicated to chess, and they analyzed the typical war strategies employed in the so called “science game”, establishing an ironic analogy with iconic war images, such as the historical photograph Rising the Flag on Iwo Jima, taken on 23 February, 1945 by Joe Rosenthal. The rest of the works exhibited were linked by a similar paradoxical character and by a very fine sense of humor. Patrimonio (2008), a 3 by 18 meter landscape intervention, reproduced in wood, fabric and wire the famous three- dimensional sign that dominates the Hollywood landscape, but the artist replaced this word with the one that served as a Spanish title for his work, an allusion to the possible difference of cultural paradigms. Crecimientos artificiales, another 2008 installation executed with old chairs from the Guanajuato Teacher Training School cut out at different angles, in such a way that they seemed to emerge from the pavemment or be sucked up by the latter, may have contained an open reflection on child education. Expulsión TRIODO reproduced via a digital print an installation created in 2010 with 4 x 4 inch posts placed vertically in the manner of letters to form the word “Expulsion”. The posts, cut out in different sizes in an upward direction, was one of the pieces that best incarnated the verbal tautology characteristic of Conceptualism.

Iván Puig personifies the contemporary global artist, creating a body of work that is equally committed to its social circum- stance and to the free flight of imagination.