Beyond the Daily Life, the exhibition curated by Julián Navarro and held at the Center for Visual Communication in Miami from 5 December 2009 through 16 February, 2010, gathers together the work of Guerra de la Paz (the artistic duo formed by Alain Guerra and Neraldo de la Paz) and Teresa Diehl. Since 2001, Guerra de la Paz has worked with clothes discard- ed by companies that export second-hand items of clothing to Haiti. These are textiles which have been discarded by their first owners, and rejected once again by their second owners. They are articles of clothing abandoned to their fate and trans- formed into trash. Guerra de la Paz collects these discarded material and transforms it into sculptures. They conceive clothes as a metaphor for humanity, for society, as a symbol of contemporaneity, and they transform them into unequivocal references to all times. Each piece of clothing has a history, something to say about its past, and the task of this artist team is to discover and interpret what it is. 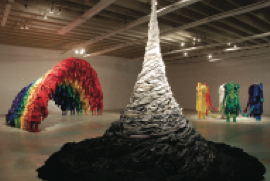 The Hindu god of storms rises like a magnificent rainbow that is also reminiscent of Roman aqueducts: Indradhanush (2008), cap- tures the attention of visitors as soon as they enter the exhibition. Countless individuals are gathered together in this work. Their bod- ies do not exist, but their clothes and their rain boots do, and they remind us of the fact that those who are building this rainbow are human beings, members of a community. Ascension (2009), on the other hand, dominates the vertical axis of the gallery: it is a vortex crossing the space from the ceiling to the floor, from white to black, through an infinite range of greys. The Ying and the Yang, heaven and earth, good and evil, are materialized in this work, without obviating the real space that exists between both extremes.
Teresa Diehl’s Random Fall (2007 ) offers the viewer the possi- bility to transport him/herself to another ambit, when entering a closed, dark room, whose shiny black floor and mirror walls replicate to infinity the images from the videos, which are pro- jected on a wall and on multiple screens floating in the air. Hover (2008-2009), is an installation Diehl has featured with hundreds of small human figures carved in soap, which convey the anxiety in which humankind is immersed, and invite us to reflect silently on man, his fragility, his errant life and his crit- ical human condition.

Beyond the Daily Life is a dialogue on humanity based on images that are familiar to everyone, and on objects that retain all their beauty and display it with assurance, even when the use they are given is very diffrent from the one they were con- ceived for. It is, in sum, an invitation to transcend everyday circumstances.