According to art history, the kinetic movement began in Paris in 1955, with the mythical exhibition “Le Mouvement”, organized at Denise René Gallery, an unquestionable fact which marks the origin of a movement that assembles European and South American artists. 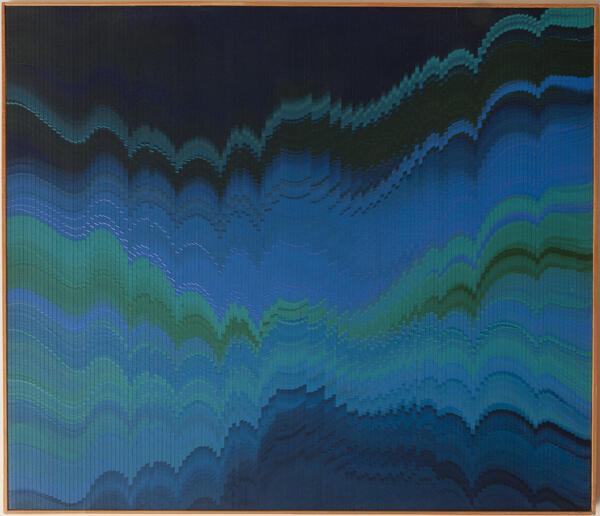 Simultaneously, in Latin America the assimilation of the European avant-garde movements gave way to a lyrical or geometric abstraction that would place Latin American artistic discourse on a par with the international one.

The work of Palatnik, a kinetic artist, painter and draftsman, forms part of the artist’s global reflection revolving around the notion of movement as of 1949. After painting some constructivist canvases, he began to devise machines in which color appears in motion. These experiments led to the creation of the Aparelhos Cinecromáticos (Kinechromatic Devices): on a plastic screen covering the front of his devices, and using motors and light bulbs, he projected colors and forms, showing them for the first time in 1951, at the 1st Sao Paulo International Biennial. In 1964 they were exhibited at the Venice Biennial, a participation that earned him an international reputation and led to his being considered one of the forerunners of kinetic art. This recognition led to his participation, in 1964, in the international kinetic art exhibition, “Mouvement 2”, at Denise René Gallery in Paris.

Although he was born in Natal, in the state of Río Grande do Norte, in 1928, when he was a little boy Palatnik moved with his family to Tel-Aviv, where he studied mechanics and specialized in internal-combustion engines. In 1948 he returned to Brazil and settled in Rio de Janeiro. His contact with artists Renina Katz, Almir Mavignier and Ivan Serpa, the conceptual discussions with Mario Pedrosa, and his frequent visits to the workshops at the Psychiatric Hospital in Engenho de Dentro resulted in Palatnik’s breaking with conventional compositional criteria. He abandoned painting and figuration and focused on freer relationships between form and color. He ceased to concern himself with the quality of the work based on the realistic handling of paint and with the association between art and motif.

The Kinechromatic Device was Palatnik’s most significant contribution in the field of kinetic art, but it was not the only one. As of 1959, he took the movement to the three-dimensional level. He created works in which electromagnets activated small objects placed in closed boxes. At the same time that he invented works through which he explored the possibilities of technology in art, the artist produced paintings on two-dimensional surfaces. In 1962 he began his series of Progressões (Progressions) and in 1964 he started to work on the Kinetic Objects, sculptures consisting of wires attached to colored shapes and moving strings rotated by motors or by electromagnets, whose mobile forms were reminiscent of the works of the American sculptor Alexander Calder.

To present Latin American art and to offer to the European public a general view of this culture is always a difficult task, especially because the concept is quite unfamiliar. Abstraction, however, continues to be a subject of interest in the visual arts, both for scholars and for collectors and aficionados. In this context, the exhibition “Palatnik, une discipline du chaos” (Palatnik, a discipline of chaos”) at Denise René Galley, confirms this interest once again. The show proposes a very interesting reading of a selection of his oeuvre through a very perceptive exploration, which includes Jacarandá, a piece executed in wood marquetry, his “reliefs progressifs” (progressive reliefs) in paperboard, or the more recent series of paintings titled “W”. Works that question the senses through their undulating colors, the superimposed layers, and the vertical axes that create kinetic effects.

The show reveals the vigor and the effectiveness of a coherent oeuvre, which interrogates time and movement. The course followed by his work, affiliated to kineticism and to that generation of pioneers of optic-kinetic art who developed that formal revolution manifests its particular constructive process revolving round the mechanics of painting through a select repertory of colors.

Like other artists, Palatnik is heir to a utopia inscribed in progress and modernity. Together they have constructed an art included within the abstract, geometric and constructive tradition, and based on movement, optical effects and the viewer’s participation. Through this group of works, the exhibition attempts to subtly shake the semantic field we habitually identify with Palatnik in order to open up new possibilities and allow the viewer to glimpse new meanings. It is an invitation to a complex and renovated reading of his universe and his vast oeuvre.