Ángel Vapor’s (Havana, Cuba, 1970) artistic oeuvre has been characterized by its versatility (he has explored painting, drawing, engraving and sculpture equally, executing within the latter discipline several artworks for public spaces) and by the enigmatic aura typical of any creative production that includes such diversity of genres and sources. Edge Zones Art Center presented “Constructions”, the second Miami solo show of this artist who is a graduate of the National School of Visual Arts and the San Alejandro Academy in Havana 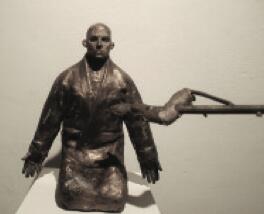 The show, comprised of a painting and ten sculpture pieces, approached the theme that inspired its title, construction, through its main actors man, the tools, the materials as a point of metaphorical reflection regarding human society and civilization. Supporting the construction of his work on the bases already created by the Dada movement and Pop Art in the field of sculpture and object art, Vapor proposes a reinvention of a three dimensional expression that freely combines classic sculpture techniques such as clay modeling and bronze casting to create these works that refer us in equal measure to Degas’s sculpture experi- ments with his bronze ballerinas dressed in real tulle tutus, and to George Segal ́s plaster casts seated on furniture pieces or inter- acting with actual objects.

In these works by Ángel Vapor, the sculpted figure and the found object intersect to create a narrative that incarnates in itself the notion of construction, referred both to the scaffolding that supports what must be erected to endure and be inhabited, and to the structure that serves as support for the character that every “Actor of Power” incarnates and represents in the work by the same name, a male figure in bronze, in the martial arts salute position and wearing a kimono is confronted by a hand and an arm, also cast in bronze, which crown a structure that resembles a microphone foot. Between the portrait of Dr. Gaspar (a torso cast in bronze and installed directly on the wall by means of screws, which makes it float at the height of the spectators’ eyes), and works like Página de acero (Steel Page), almost minimalist in nature, there is an underlying correlation that goes beyond the evident and hints at the constructive process on which the whole project is inspired, and which has its culmination in the work entitled Constructor, in which a bronze figure works with a tool on the extensive planar surface of a recycled table: a metaphor for all the tools used by man, for all the productive activities man carries out, and, of course, for all men.