The city of Cartagena has strong connections to cinema, music, dance and traditional artisanal crafts and this first edition of the biennial honors these cultural manifestations while introducing both national and international contemporary perspectives. 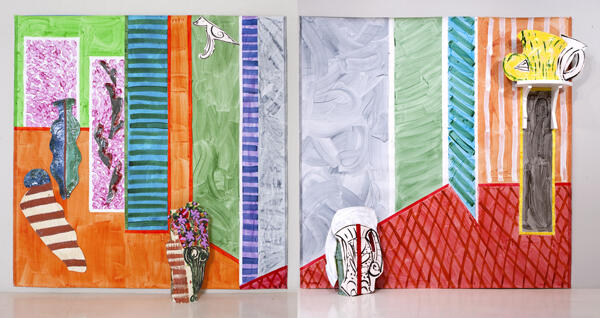 From February 7 to April 7, 2014 the entire city will be activated by multidisciplinary exhibitions in diverse venues throughout the city, including a number of installations and performance in public spaces, and a solid educational program of conferences, artist talks and workshops. All of the biennial programming is free and open to BIACI 2014 is a platform that brings contemporary artists from 45 different countries and across generations into the same context in order to promote dialogue and create connections between national and international artists. The Biennial is organized by the Fundación BIACI, a not for profit organization whose main purpose is to promote international and national contemporary art in Cartagena de Indias.

#1: Cartagena is an issue-oriented project with works spread throughout the historic district. #1: Cartagena reflects on the cultural traditions of the people, the history and the deep connections to the colonial past, as well as encompassing literature, cinema, music, dance and crafts. The Biennial focuses on the idea of Presence in its multitude of meanings, conveying how the past continues with us in the present. Structured as a hypertext, the macro project of the Biennial proposes a discontinuous journey through nine locations, each one presenting a multiplicity of narratives and memories. This structure also promotes the re-signification of the city as a monument. The viewer decides their own itinerary, making links from one space to another, stopping here and there to look at the city-monuments, and endowing their chosen circuit with the power, excitement and soul of the city. This personal journey gives meaning to the macro text: the Biennial and its exhibitions, site-specific projects, performances, film program and lectures.

#1 Cartagena is structured with four core exhibitions, each containing an average of twenty artists and addressing a network of history, facts, and imagination that is connected both to local history and to its multifaceted manifestations, many of which are global. One core concept deals with loss, trauma, and the intangible, and is largely centered on the Museo Histórico Palacio de la Inquisición. The second deals with crafts, largely spurred by the ancient crafts traditions of Cartagena; its center is the Museo Naval del Caribe. The third core focuses on colonialism and its manifestations and is found principally in the Casa 1573. The final exhibition core deals with arts, culture, and ecology and is based mainly in the Colegio de la Presentación.

One of the main goals of the International Contemporary Art Biennial of Cartagena de Indias is to offer educational tools that allow the public to relate more profoundly to contemporary art. The artist-educators Rafael Ortiz, Ernesto Recuerdo, Nelson Fory, Roberto Carlos Pérez and Sandra de la Cruz have been working with students from ten schools and educational institutions around the city. The Biennial educational initiatives leading up to the opening have included conferences and talks with curators and artists including Jaime Cerón, Javier Mejía, Jim Fankuggen and Guillermo Marín, among others.

Berta Sichel, BIACI´s Artistic Director is an independent curator working internationally. Her experience with Biennials started in Brazil at the São Paulo International Biennial and later with Aperto 93 at the Venice Biennial. Sichel consulted with an international group of curators to select the participating arts and projects. From 2000 to 2011 Sichel was the Director of the Department of Film and Video at the Reina Sofia Museum in Madrid where she presented the work of a wide range of international and local artists and produced more than 20 performances and concerts. Born in Brazil, Sichel moved to New York in 1979 and graduated from New York University with a Masters in Media Ecology and a PhD in Communications. Among other prizes and awards, she was a recipient of the 1998 Guggenheim Fellowship in Humanities/Fine Art Research, and in 2010 she was recognized by Spain’s Association of women in the Arts as the best female curator with a special mention for her support of women artists.

Natalia Bonilla, BIACI´s Director has a degree in Fine Arts from the Universidad de los Andes de Bogotá, a Masters in Cultural Project Management from the Sorbonne Nouvelle Paris III and specialization in Fundraising from the Jorge Tadeo Lozano University.

Deborah Harris, BIACI´s Advisor, graduates from Stanford University, and has worked for more than twenty years in art magazine publishing. She began her career as Advertising Director at Art News, and later, Art in America. Since 2008 she has been part of the leadership team at The Armory Show where she launched, and now directs, The Armory Show Modern. She was part of the team that launched Art Platform—Los Angeles in September 2011.

Barbara Krulik is a consultant serving inter- and multidisciplinarty artistsand compaies in production, management and distribution of their work. She spcializes in performance and site specific art and acted as curator of the performance program for BIACI 2014.

Bisi Silva is an independent curator nd the Founder/Direcotr of Centre for Contemproary Art, Lagos. In 2006 she was a curator for the Dakar Biennial in Senegal. Since 2011 she has been the curatorial advisor for Tiwani Contemporary, London.

Paul Willemsen is a Belgian-based curator and writer. He graduated as a Film Director from the RITS School for Audiovisual and Performing Arts in Brussels.

Communications from the Universidad Católica Andrés Bello in Caracas, and a B.A. in Film Studies from the International Film School at San Antonio de Los Baños, Cuba.

Stephanie Rosenthal joined the Hayward Gallery as Chief Curator in December 2007 having previously worked at the Haus der Kunst in Munich for more than 10 years. She worked as Assistant Curator and Co-Curator on highly praised survey exhbitions including Night (1998) and Objects in 20th Century Art (2000). Her more recent project was an exhibition of Ana Mendieta’s work at the Hayward Gallery.

Colombian artists participating tin the exhibition: “The Loafer Imperfect or when the Things Disappear”.