The Triumph of “Kipple” in Alejandro Almanza Pereda’s Sculptures

In the 1960s sci-fi writer Philip K. Dick coined the term “kipple” to explain the astonishing ability of household objects to accumulate in piles of unwanted clutter. He imagined kipple not merely as mess or disorder, but rather as an irreversible, entropic force—a perverse electromagnetic power binding inanimate things in defiance of human organizational systems. A character in his 1968 novel Do Androids Dream of Electric Sheep? imagines walking into a temporarily unoccupied apartment to find nearly everything—furniture, carpets, old magazines, junk mail, even empty match books—huddled high above in a corner of the ceiling. To Dick, this derelict stuff, without the constant oversight of its former owners, succumbs to strange, ineffable compulsions to shed the restraints of domesticity. 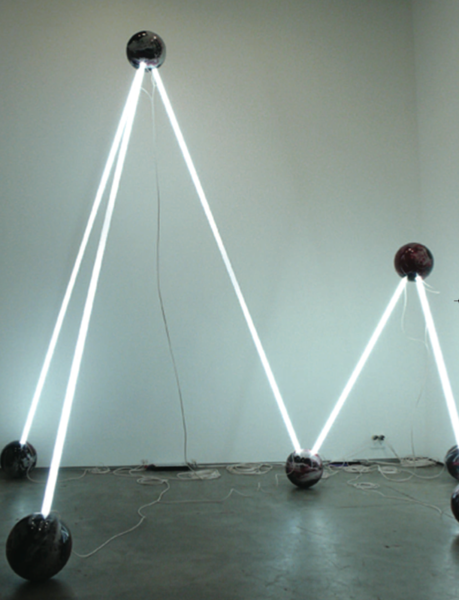 Encountering Alejandro Almanza Pereda’s recent sculptures evokes Dick’s notion of kipple; both projects explore the agency of objects to overturn the types of deliberate control evident in their production, consumption, and use. For example, in Almanza’s Untitled (mesa) from 2006, the viewer confronts a table and television hovering mid-air in a seemingly impossible, gravity-defying contortion. The table and TV are kept aloft by a taut electrical cord plugged into a socket that provides power for a set of lit fluorescent tubes buttressed by a pillow that are the table-TV’s secondary, though no less precarious, supports. The fluorescent bulbs, bound together with pairs of neon yellow children’s inflatable arm floats, seem hopelessly incapable of holding up the immense weight of this arrangement. Beneath the pillow, resting on a small telephone table, a tea saucer cantilevers unstably off the table’s edge, held in place only by a counterbalanced cup poised to topple at any moment. To add to the overall mayhem, the suspended TV, itself hanging only by that single cord, is on; caught half-tuned between channels, the picture is but an indistinct blur.

Like Dick’s conception of kipple, Almanza’s outmoded junk of the everyday has an irresistible attraction to itself, and an almost conscious volition to form enigmatic accumulations. Yet Dick attributed an inert, “pudding-like” character to kipple that masked its tendency to covertly reproduce itself. In contrast, in Almanza’s sculptures objects behave more brazenly; they are more acrobatic. Though the objects Almanza chooses for his sculpture brim with what he calls “lurking forces,” these things are then put into arrangements that openly flout the conventional, predictable, earth-bound solidity of normal objecthood. The quotidian household object for Almanza is not sneaky, passive-aggressive kipple, but rather flamboyantly defiant kipple. Almanza’s objects charge past wilted entropy and go straight for the jugular, staging hijinks of total domestic pandemonium.

Almanza, a Mexico City-born, New York-based artist, describes his work as exploring registers of risk that are generally unacknowledged in everyday encounters in cities like New York. For Almanza, Mexican building construction uses hackneyed techniques and improvised materials to produce hybrid structures assembled without strict adherence to safety codes. The bricolage element forces pedestrians to maintain a vigilant awareness of their surroundings that can seem like wariness. In contrast, in the U.S. the acceptable level of risk for objects behaving unpredictably is much lower. Almanza perceives his sculptural environments as exacerbating viewers’ feelings of anxiety triggered by possibly unsafe spaces; as he contends, the “hope [is] to give the viewer an uneasy tension... it is through this tension that the installation ceases to be static.”

However chaotic Almanza’s sculptures appear, the countervailing delicacy and dexterity required to assemble his balanced works produces a paradox of stasis and dynamism, control and disarray. As he harnesses precariousness, he creates, or perhaps organizes is the better word, protocols of how to produce chaos: Almanza uses order to produce the appearance of disorder. The work I described previously, Untitled (mesa), is typical of Almanza’s sculptural configurations in that it involves a multitude of objects joined together in sequences of improbable cooperation. Each individual element is part of an intricate system of balances. For example, the tenuous placement of the teacup and saucer bears no structural connection to the jerry-rigged engineering of the suspended TV and table, yet the saucer’s improbable point of balance mirrors the implausibility of the air-borne forms. It is as though the entire lopsided arrangement depended on its smallest component to avert a disastrous collapse. I find myself rooting mightily for that little cup.
It may be paranoid to suspect that nearby objects will at any moment defy familiar patterns, and perhaps delusional to believe they can transgress basic laws of gravity. Yet the idea of the inanimate becoming animate is not only deeply troubling to our sense of stable subject-object relations, it violates our entire construction of privacy and interiority. The psychoanalyst Jacques Lacan postulated that objects do “look” back at us. In a famous anecdote, the young Lacan traveled at sea among a group of fishermen. He spotted a glittering sardine can tossed among the waves, which caused one of the fishermen to taunt, “You see that can? Do you see it? Well it doesn’t see you!” Initially it seems merely a silly joke, yet Lacan recognized it as a put-down at the most basic level, implying that he was unworthy of even a sardine can’s attention. As Lacan explained, “If what [he] said to me, namely, that the can did not see me, had any meaning, it was because in a sense, it was looking at me, all the same. It was looking at me at the level of the point of light at which everything that looks at me is situated.” Things look back at us because our identities are constructed not by a coherent and complete “I,” but by a subject that knows it is seen by others as a “you” or even as an “it.” Self-consciousness about being looked at by any being or thing in the world can be a symptom of receptivity or paranoia, hence the two meanings in the phrase “I become one with the world.”

The awareness that the external world views us can transform people into objects, or can imbue objects and commodities with lively power. Like something we can’t afford that shines under a protective case, certain objects flaunt their scarcity. Almanza makes use of such haughty objects that are animated by their exclusivity. In Almanza’s Untitled (reja), 2006, a half-dozen lit fluorescent tubes placed on oriental rugs prop up plastic Coca- Cola crates filled with full glass bottles. The length of the tubes means the bottles are unattainably high on the wall. If you get thirsty, forget about getting those down. The theme of scarcity recurs in Untitled (aguas), 2006, in which simple l-bracket storage shelves are perched near the ceiling, high above the viewer. Three one-gallon jugs of water are placed on the top shelf; the next contains several nondescript cardboard boxes of various sizes. A pair of chintzy brass sconces holds electric lights that imitate fake candles. The scenario is familiar—ok, this is just a bunch of stuff stored in the garage—but the extreme height of the objects’ placement is troubling. Fundamentally, it is stuff you can’t get to. The basic nature of what kind of objects it is that are out of reach is disquieting. What happens if you or I need that water? Almanza’s sculptures propose a world of objects charged with rebellious energy, defying the common tendency to take them for granted. Though we know he creates these gravity-bending situations, their improbability makes us personify their old TVs, furniture, and Coke bottles as disobedient protagonists in a drama of triumphant junk. They ask us why we produce so much we don’t need, why we treat this stuff so poorly when we don’t need it any longer, why we don’t distribute it among ourselves more equally. Ultimately these objects are animated by the histories of their former use; Almanza imagines what a mutiny of kipple would look like.

Alejandro Almanza Pereda was born in Mexico City and received his B.A. from the University of Texas at El Paso. His work has appeared in exhibitions at Art in General in New York and the Dallas Center for Contemporary Art, and in group exhibitions at El Museo del Barrio, The Queens Museum of Art, and the Soap Factory in Minneapolis.
He currently lives and works in New York.