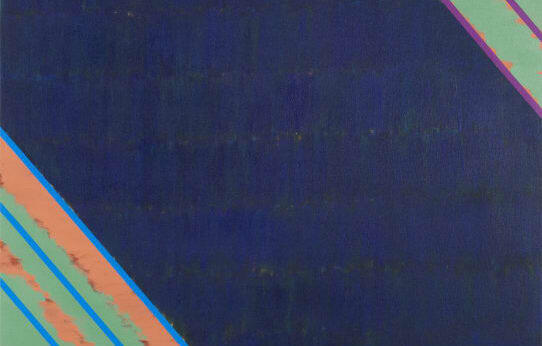 An array of Rodríguez’s paintings from the 1970s and 1980s, including works from his Paradise (1985-1988) and his Cimarrón (1985-1988) series, alongside a selection of his never before exhibited collages revealing Rodríguez’s multifaceted and varied practice are featured in the exhibition.

Since the 1970s, the artist has created a consistent body of work adopting former Hard-edge, Geometric Abstraction, and Minimalist aesthetics seen in his Geometries (1970-1990) series, later expanding upon expressionist vocabularies to convey his Afro-Dominican heritage, as well as the transnational dialogues between the Dominican diaspora and the homeland.

Presenting a highly abbreviated view of Rodríguez’s oeuvre, the exhibition and the online viewing room introduce one of the many Latinx artists continuing to challenge assumptions of Caribbean national belonging, suggesting myriad ways to look at island-based and diasporic relations. Bridging geometric abstraction and figurative language, Rodriguez’s works attest that the artist’s exploration has not only been artistic, but also political in character.

Founded by Isabella Hutchinson, Hutchinson Modern & Contemporary specializes in modern and contemporary Latin American, Latinx and Caribbean art. Hutchinson has over three decades of experience in the acquisition and sale of modern and contemporary art in this field. As a private dealer, she started Hutchinson Modern & Contemporary in 2001 after a successful career at the helm of Sotheby’s Latin American Art Department in New York. The gallery will enable Hutchinson to further her mission of bringing greater visibility to significant Latin American, Latinx and Caribbean artists. Hutchinson is also a long-time collector of fine art and therefore has a keen understanding of what it means to assemble a cohesive collection that blends works of historical and personal significance.