TÚLIO PINTO: A CONJUGATION OF FORCES

Túlio Pinto (Brasília, Brasil, 1974) builds his artwork by establishing tensions that defy the law of gravity and provide balance, using materials of opposing nature and behavior. This is how he feels and translates the pulsation of the world of things to be reflected (also) in the world of human relations. An ambiguous game, which, in a first reading may seem circumscribed to the formal combinations that were born from the Brazilian constructivist inheritance or the international minimalism. A second analysis, though, brings the perception that, beyond tradition (which the artist makes referenceto and competently and rigorously expands), there is a consistent authorial poetics, which subverts the already established. It indicates urgencies that remain current: the shifting and utopic territory of harmony among opposition. 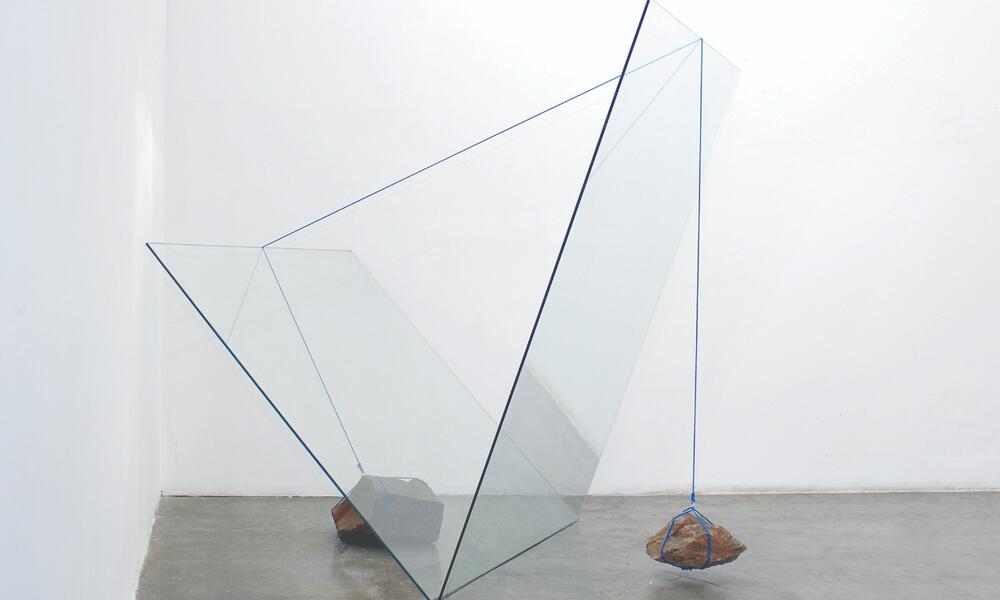 The multimedia young artist (he graduated from college in 2009) is extremely focused and prolific. He rose in the Brazilian artistic field at the end of the 2000s, with sculptures in which colored balloons were opposed to thick concrete plates. Something seemed to breathe there, though slowly draining into a sigh. An agonic breath, which reminded us of our own urbanite breathing, surrounded and immersed in heavy living structures.

This breathing of things gradually enlarged to include the lexical of other materials. The gas balloons gave way to blown glass. The concrete beams were replaced by iron rebars or wood blocks.Steel cables and fabric bands started to unite and establish a contingent balance for these elements. Faces of geometric solids had an oblique insertion of glass sheets or, a more radical gesture, sand (silica) cubes or trihedrals. Thus, faithful to the nature of the materials, Túlio started to use the primordial component in making glass. A wide vocabulary for a body of work of irreproachable cohesion and nexus.

Sand for sand castles, an ancestral metaphor for dreams. Sand of constructive risk. It was with an enormous cube of wet sand (1.60 m of side),connected to a glass sheet, that the artist faced one of his riskiest bets. During the assembly of the piece for an individual exhibition at Baró Gallery (São Paulo, 2013), the sand cube collapsed in lumps on the floor. Reassemble it? No way. In an emblematic behavior of his working process, Túlio simply incorporated the accident to the piece, which grew in eloquence. ‘The abyss fascinates me; especially the abyss of limits ofresistance for materials,’ the artist notes. ‘Risk and chance are elements in my work, in the same way that they are present in our lives. If we pay attention, they show us the way’.

The unstable balance made of opposing dualities may incorporate a third element: the insertion of the architectonic space. This is how the artist created TrajetóriasOrtogonais(in English, ‘Orthogonal Trajectories’): articulating wood blocks that were suspended merely due to the force of gravity and the tensions between walls, ceiling and floor. Or, in an intelligent reference to Giovani Anselmo’sArte Povera and his La SculturaCheMangia(in English, ‘The sculpture that eats’), from 1967, he created the installation Práticas de reconhecimento e algumasaproximações(in English ‘Recognition practices and some approaches’), from 2012: boxes containing eating vegetable beds pressuring latex balloons. In the end of the exhibition period, part of the piece was served as salad to the visitors, recreating the arch of references between art and life, organic and inorganic.

With an increasing insertion in the international circuit and a fresh repertoire in several art residencies abroad, Túlio Pinto’s presence in individual exhibitions is also increasing, thus confirming his solidity of purposes and results.

This was the case for the individual exhibition that took place at Baró Gallery (2016), in which he broadened his poetics even further.He constructs a journey that is filled with the risk and the challenge of experiences, which, in the same way that happened when he was residing in Phoenix (Arizona, 2015),also involve displacements that he calls ‘mental sculpting intermediations’.

Those are procedural experiences that may be translated into detailed notes in thejournal of a long journey he undertook on foot or into performances and videos. This is how the video Unicórnio (in English, ‘Unicorn’), from 2016, came to be. In this video, he wanders amongst rock formations at the Superstition Mountains in Arizona, during his artistic residence in Phoenix (2015). In Unicórnio, Túlioreverberate the surrealist tradition without cutting the umbilical cord (heliumgas-filled balloons) that he uses to tailor most of his production. They function, then, as colored graphisms in space.Or they signal an unfolding of perceptions that have been irremediably expelled from a shelter (the uterus?), displaced in an inhospitable geography.

Unicorn or Minotaur? In any case, these are mythological characters that highlight the inadequacy of humans or otherwise to show the only way possible to stand being in the world: the exercise of wishing and dreaming beyond the roughness of the horizon and reasoning.

The artist is also interested in exploring materials that move between solid and liquid. Even the most contingent of all materials, ice, supplies elements to make his poetics denser. Or tar. Glass, it is of notice, also slips and makes puddles, although at a speed so slow that can only be perceived after centuries. Perhaps to highlight the changeable instant we all are.

Túlio surprisingly admits he was not a good student of physics, although he is evidently fascinated by the subject. In the larger and riskier pieces, he asks for the support of a structure engineer with the calculations. This is rare, though. He confesses that his main ally in creating the pieces is fear: ‘Fear instigates and defies me. It fascinates me like an abyss. I need to get to the edge and look down to see how deep and risky it is’. The abyss appears when the material shows its potential, which is sometimes unknown, and we only discover such potential when we use the material in a different way, creating a tangent, a space for the unforeseen.

Túlio is interested in all contingent, changeable, temporary materials. Something that could immediately seem opposed to the nature of the sculptor, if it were not for the long tradition that comes from the Russian Constructivism. He does not customarily use the traditional tools in his pieces. He does not sculpt, nor shape anything. He obtains the pieces after establishing an unstable interaction with different things such as weight, density and dimension. He transforms differences into a sculpting result that is fresh and inventive. The constant target, the artist reinforces, ‘is the materialization of the invisible: the force of gravity. Something we feel, but do not see, despite the fact that it overpowers all and everyone in the world.’