Post-Kinetic: Conceptualism and Geometry in Venezuela

In an interview with Jesús Soto conducted by art critic and curator Guy Brett in 1965, the artist commented on how difficult it was for the spectator to understand abstract art as something based on life itself; not merely as a formal investigation responding to a set of very strict rules, but as the product of a more personal need, more like the result of a spiritual relationship that the artist embarks on with the elements interacting in the work. Soto commented that, in his opinion, the work of art was simply the recording of the visual discoveries and feelings that occur on a daily basis. 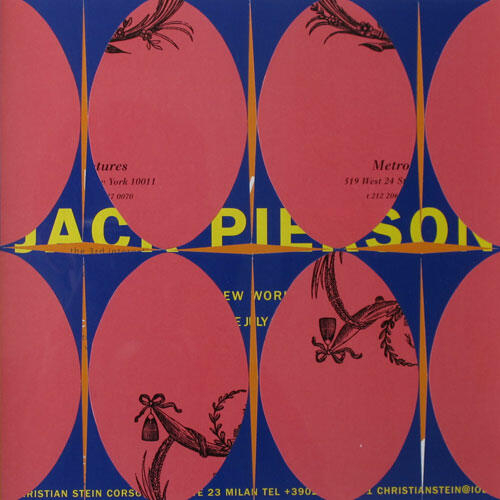 It may be stated that the works that comprise Post Kinetic have two types of strategies as their point of departure. There are works that look, analyze and compose, on the basis of the artist’s experience, like for example Roberto Obregón’s Disección/Dissection (1992), which consists in an obsessive study of a rose and of the individuality of each petal through a process of rigorous documentation in which repetition and a grid pattern become the sensitive frame for the fragility and the poetry of the everyday component of the real. José Gabriel Fernández synthesizes in Mariposa/Butterfly (2003) the movement and the shape of a pair of wings, creating an abstract volume that also records the look of nature. Alfredo Ramírez’s altarpieces, En la boca del caballo/In the horse’s mouth, (2008), apparently constitutes a graphic synthesis of an animal gesture.Sigfredo Chacón, Sin título/Untitled (1974) presents four collages that narrate the everyday through the observation of graphic elements translating, in the manner of a visual diary, a moment of the day.

Then there are the works that are gazes, in which the artist presents problems or experiences addressed to the viewer. Jorge Pedro Núñez, for instance, creates assemblages with found materials, endowed with actual motion, as in the case of El Último Cuplé/The last Cuplé (2011), in which a mobile causes vinyl records suspended by a nylon thread to spin. Also, through the rigorous clippings based on the announcements of exhibitions published in Art Forum magazine, in the series Black Mountain in Color (2011) he not only inquires into the experience of the spectator’s perception, but he also plays with the world of references of contemporary art and the collective unconscious. Carla Arocha and Stéphane Shraenen strike up a relationship of gazes in the installation Persiana/Blind (2010), in which a mirror grid suspended from the ceiling inhibits and modifies the visual element in two Light Blue (2010) canvases, transforming the viewer into a part of the work. Yucef Merhi exhibits Net@tari (1985), his first work, which he created when he was eight years old, and in which the codes of the well-known game have been modified in order to produce a varying and continuous image.

The approximately twenty works that comprise the exhibit at KaBe Contemporary gather together a sampler of revisions and proposals included in the strategies of conceptualism and abstraction in the Venezuela of the past few decades, which may perfectly coincide with the process of quasi magical and everyday relationships that take place between the artist, the work and the viewer.