With a conceptually powerful body and a deeply subversive and anti-system soul, the exhibition "Instrucciones para destruir dinero" (“Instructions for destroying money”) by Pablo Boneu (1969, Argentina) is a pertinent metaphor for the status of money. A totemic theme reflected in great size via ground up dollars or bills from other countries. The mural Esta obra no vale mil dólares (“This work is not worth a thousand dollars”), made with a thousand dollar bills torn to shreds, splits the power of money up, fading its essence away and expanding its symbology by means of the impeccable aesthetics which allows Boneu to move at ease in advertising appropiationism. 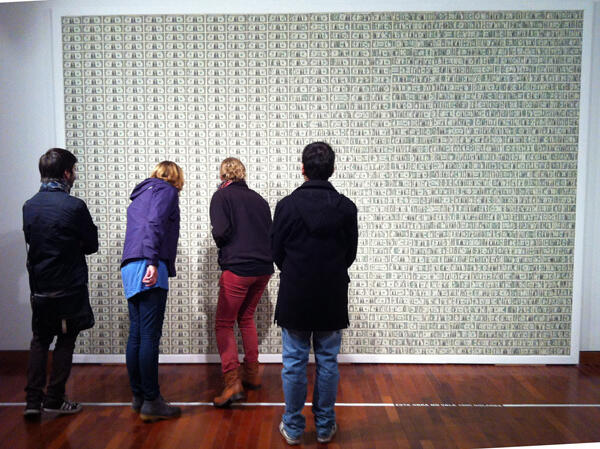 This exhibition has had wide repercussions in the media, since it is timely in historical terms (Boneu is a prophet ignored in his homeland), but at the same time, the circumstances of international crisis and the difficulties to acquire dollars in Argentina, placed the project on the front page of the newspapers.

It will always be shocking to see someone in a museum violating the law − the logical and civil laws – by destroying money, but in a country whose president is asking the citizens to “forget about dollars”, Boneu hit the visitors’ most sensitive organ: their pocket.

Several pieces involve a print of decorative and rhythmic characteristics whose insistence represents a dangerous approach in the eyes of all the artists who criticize the relationships between art and the market. The destruction of the point of reference of the materialist society is a fact that has been interpreted by artists from Bourdieu to Benjamin.

The aura of this radicant and semionaut artist, in the words of Bourriaud, has thrown roots up to Mexico, inscribed among the anti-institutional artists with a global, poetic and universal message which can be read at several levels.

The exhibited bills transform the cathedral of the 21st. century, the museum, into an ambit for adoration, illusion and exhibitionism which curator Humberto Sosa describes by stating that “it is not that fiction advances, but rather that reality moves back”.

The show is completed with the “money destroyer” that allows the public to destroy their money in order to reach a germinal condition, identical to the one the artist experienced in his initial stage.

To reinvent oneself, without a cent, in order to subsist and subvert.