Nayda Collazo-Llorens’ latest works displayed in her individual show at LMAKprojects are so fascinating, complex and inquisitive as usual. 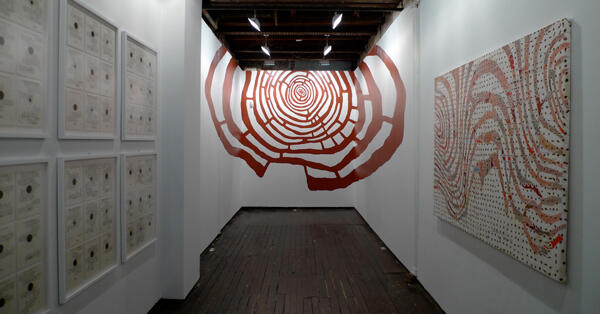 Across Doom Hopes the Guiding Fever presents canvases and digital prints, but what finally gives total cohesion to a very well conceived group of oeuvres is the intervention in the space. A spectacular drawing occupying three walls of the gallery wraps the viewer in a kind of net, or spider’s web, an organic and winding form that absorbs us toward its interior and makes us re-think our own coordinates − not only spatial, but also mental. Indeed, it seems as if a whirlwind around us, with its epicenter nailed to the wall, gave way to other worlds, outer and inner, to other levels of understanding.
Collazo-Llorens continues here her exploration on how our minds process information, reflecting on the complexities of the mind, of language, of perception, navigation and reception of that which is inside us and around us. But on this occasion she focuses on noise, on wastes and on randomness – on that which remains impregnated in the mind after it is subjected to the incessant inputs of everyday life. Something scientific emanates from her work, an observation that seems to be empiric and suggests the curiosity of the naturalist. Of the collector whose task was to fix and process this vastness.
In the paintings Locus Rackets Hypnotic (from the Test Series) (2012), which belong to another former series in which the artist already played with the procedure of duplicating Rorschach tests, Collazo-Llorens displays a landscape of information layers which become articulated through a series of points generated by applying ink on a folded canvas. When the canvas is unfolded, the points appear as a reflection on a mirror, and they are contained in, or traversed by undulating forms that suggest some kind of transmission. The pieces are very beautiful and articulate a gaze that ranges from the micro to the macroscopic, since we do not know if we are faced with an amplified image of an organic tissue or with a terrestrial landscape (or a camouflage pattern). This game of a gaze that comes and goes and navigates between parallel realities, as piled up layers, is fundamental in Nayda’s work.
The series after which the show is named, Random Triggers (2012), presents us with randomly generated texts printed onto target sheets. Organized in blocks of nine prints each – grouped by subtle thematic connections – they contain comments on war, noise, the human genome, sexuality, the planet, connectivity, fear, contagion, the end of the world, hope… Fragmented and unconnected texts which however create their own narration and whose remains become fixed by the target sheets on which they are printed. And which refers us, once again, to the epicenter of that whirlwind that the artist has drawn in the gallery. A subtle yet essential anchorage which allows us to abandon ourselves to the search proposed by Collazo-Llorens and which takes us to look inside ourselves and around ourselves.