The Situationists gave the name of détournement to an artistic practice which consisted in taking a consumer good and transforming it into an art object, in such a way that it would deny its own character as merchandise, thus subverting the imperative to consume that characterizes contemporary capitalism. 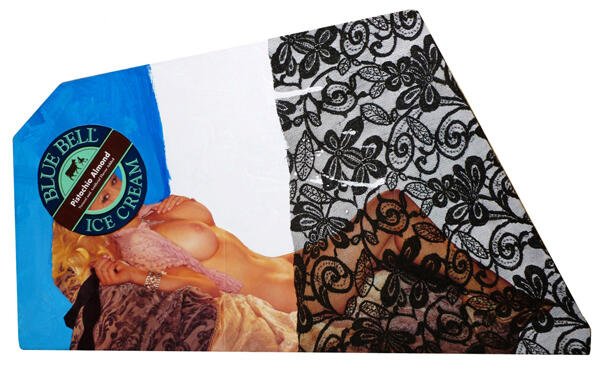 López-Ramos’s recent collages appear to follow a similar logic. In his case, it is advertising strategies that turn against themselves. López-Ramos resorts to the advertisements that appear in magazines; he cuts them out and transfers them onto his canvases. In particular, he focuses on female nudes to neutralize the character of sexual merchandise that distorts eroticism. As numerous contemporary thinkers have observed, it is not the proscription of pleasure that currently generates a guilt complex but the fact of not having enjoyed enough and of not meeting the demands of pleasure. López-Ramos presents a world rendered banal and oppressive precisely because it is flooded with sexual content.

López-Ramos aspires to show how much of a nightmare is contained in advertising images. His collages are unusual forms of an eroticism that is attractive but at the same time, shocking. The sensual bodies of the models, women’s erogenous zones appear crudely associated to cosmetic products, to prices of merchandises and to phrases that command us to buy.

The collages are reminiscent of pop representations and even of the photographic montages that any teenager would stick on a wall in his bedroom. One might consider it quite a trite practice. But one of the achievements in the works that López-Ramos exhibits in “Wonderland” is that they do not only resort to associations that might seem to be degrading to women, but that they also show the invasive and everyday character of those images.

If one might put it this way, they are anti-pornographic works. In one of the collages we are faced with a naked young woman reclining on some fine fabrics. The advertisement of a pistachio ice-cream covers the model’s face. The food product becomes obscene, degrading, both to the female figure and to the consumer.

In “Wonderland”, the naked woman transformed into an object of pleasure for the masculine gaze is semantically linked to the spectator, continually exposed to advertising images.

In other works, the paint drippings are visually related to semen. López-Ramos’s collages may be read as objections against the commercial character of today’s painting and art in general. Here the spectator is confronted with one of the most notable paradoxes in contemporary art: the critique of the market is carried out through works that are, in turn, consumer goods. Perhaps there is no way out from this vicious circle. Perhaps this is the reason why López-Ramos accepts it cynically. In this there is a dose of lucidity: the seemingly inexorable fate of art that criticizes consumer societies is, precisely, to be assimilated by the market they oppose.