Leticia Ramos is not a photographer in the traditional sense. While her medium is photographic, with images and light printed on a surface, she is more concerned with documenting the impact the world has on a lens, or the absence of a lens, and the passage of time and variations of color as subject matter. Ramos has such a singular vision of things that she invents the cameras to portray the world as she sees it. 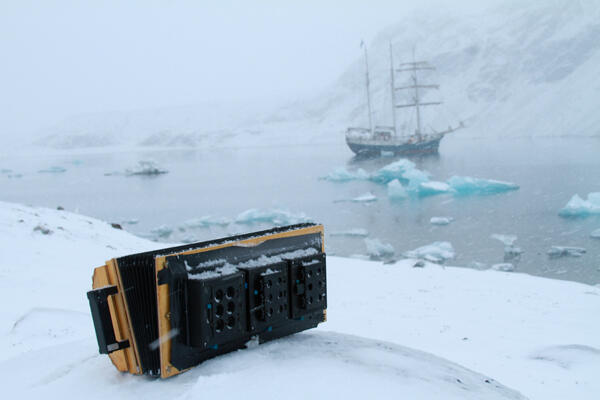 After scouring the urban fabric of São Paulo, a metropolitan skyline turned into points of flashing lights across a continuous surface, Ramos has expanded her field of investigation well beyond the city she chose to live in. Her most recent work, now on view at Mendes Wood gallery, is a synthetic exploration of the Arctic region.

For this series, Ramos invented a camera using Polaroid lens and a similar printing process that only registers tones of blue and white. The polar landscape is reduced to its chromatic staples, the mere hues only associated with the region that dominate its representation. Though photographs, Ramos’s work approaches a pictorial dimension, almost a painterly abstraction drawn from reality.

This is the twist in language her work has pursued from the very beginning. Photography, produced in its strictest and most basic sense, is the starting point for an end product that will only echo reality. Ramos orchestrates faint reminders of a scene within a composition that is at the same time document and representation, as though a new fiction, heavily grounded in reality, emerged from the diffuse nature of her methods.

Hers is not a cold straightforward look at the world, but a subjective account of its most striking features as enhanced by the equipment she manages to fabricate for each and every series. In a way, she responds to her subject constructing and perfecting a means of portrayal, the way a painter would procure the most precise pigment or a musician would tune his instruments to perfection.

The result, however, lacks in sharpness. Ramos flees from anything exact, emulating in her work the effects of time elapsed after events recorded in memory. In the end, her series approach the logic of recollection. One does not remember a landscape in high definition, yet will recall blues and whites, faint colors and faded contours that make up an image fragmented over time.